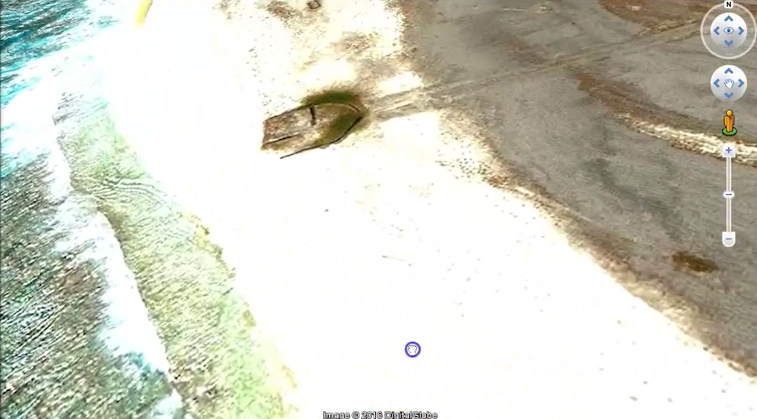 Not too long ago, someone claimed to have discovered a UFO near Area 51 using nothing other than Google Earth, and various sets of historical images of that location. There’s no way to confirm that sighting, but alien fans will surely want to hear about an equally fascinating find. Using the same Google Earth tool, someone discovered what looks like a crash-landed UFO similar to Star Wars’ Millennium Falcon.

YouTube user Third Phase of the Moon says the images seen below were discovered on Google Earth. According to the video, the vehicle in the image was found underwater off the coast of a Pacific island known as Starbuck Island, part of Central Line Islands of Kiribati, formerly known as the Barren Island, Coral Queen Island and Hero Island. The flying saucer is similar to the Millennium Falcon that Han Solo and Luke flew in Star Wars, the video says.

To me, it looks like a kind of boat that ended up under water, for whatever reason. Though it certainly seems like someone dragged it there for hundreds of yards. So does that mean the UFO had to go for an emergency landing in the middle of nowhere to avoid human detection – how clever! – crashed on the beach, and wasn’t able to stop until it reached the ocean? Does this mean the aliens died on impact? Has anyone from Area 51 seen this? Also, how is it that these spaceships keep crashing on our planet? Aren’t they supposed to be smarter than us?

But hey, don’t let me ruin any conspiracy theories for you. Check out the full video below yourself.