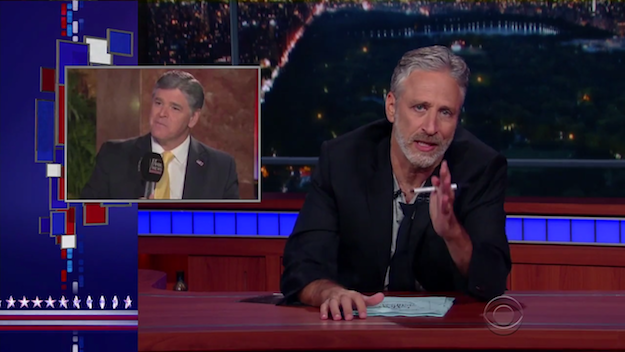 Earlier this week, Jon Stewart helped Stephen Colbert find himself, both literally and figuratively. Hosting live shows this week has done wonders for The Late Show, and in order to cap it all off, Colbert invited Stewart back once again on Thursday night, but it was for much more than a cameo appearance this time.

In order to celebrate the news that Roger Ailes would be stepping down from his CEO position at Fox News, Stewart took Colbert’s seat for a few minutes and basically hosted an abbreviated episode of The Daily Show:

You might have picked up on a few revived bits from the old show: scribbling on paper during applause breaks, eating pizza with a knife and fork and making fun of Arby’s. Oh, and he kept calling Sean Hannity “Lumpy,” for some reason.

Wherever you fall on the political spectrum, it’s great to see that Jon Stewart hasn’t missed a beat since leaving The Daily Show last year. We’re still anxiously waiting to see exactly what he’s going to do next, but for now, at least Stephen Colbert is willing to share the stage as Stewart warms up for his next act.