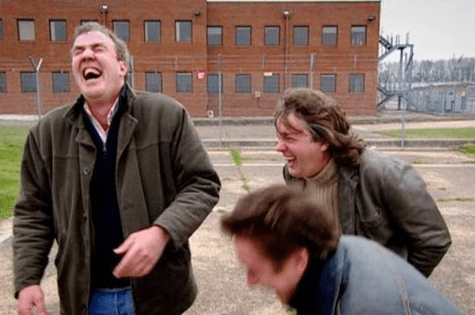 Anyone with two functioning eyes and one half-decent brain cell watching the broadcast of new Top Gear on Sunday knows that the show was bad. But how do you put that kind of terrible into words?

Luckily, the internet has experience crapping on other people’s endeavours, so I’ll let the collected crowd-wisdom do the talking.

The professionals at least have to keep civil. Car sites were probably the least flattering. Jalopnik‘s reaction was titled “What the Hell, Top Gear?” and wasn’t particularly polite about the new episode, saying the presenters “forced jokes like a constipated chihuahua.” Autoblog called it a “mess,” Metro described the new cast as a “tribute band,” while the Mirror‘s headline team worked overtime to come up with “FlopGear.”

And those are the people who have to be slightly polite.

I couldn't watch the new #ChrisEvans-fronted #TopGear because I was otherwise enthusiastically committed. pic.twitter.com/1ENNjt3e01

The Top Gear debrief in the pub last night… pic.twitter.com/c0JFDA4ntN

The audience are loving it #TopGear pic.twitter.com/jlyNYZODvL

The audience are loving it #TopGear pic.twitter.com/jlyNYZODvL

I'm really looking forward to watching Top Gear without knowing what happens in the end. #NoSpoilerAlert

In the meantime, viewing figures came out which didn’t paint a particularly rosy picture of the new season. 4.4 million viewers were watching on the BBC on average, with a peak of 4.7 million. That’s down from 5.8 million for Clarkson & Co’s last outing, and well below any series in recent memory.

Chris Evans seemed a little wounded by the hate being thrown his way, so took to Twitter to defend it in the worst way possible: with dodgy statistics:

The new Top Gear is a hit. OFFICIALLY. 23 % audience share. 12% MORE than the opening episode of the last series. These are the FACTS.

Top Gear audience grew throughout the hour. FACT. Won its slot. FACT. Still number one on i Player. FACT. These are THE FACTS folks.

This would be impressive, if the rival show on BBC One wasn’t Antiques Roadshow.

Whichever way you want to cut it — professional pundits, viewing figures, or the internet — the new series of Top Gear looks to be a flop. The only saving grace was Extra Gear, the behind-the-scenes show with different hosts, and a much better reception.

But if you were looking for a high-budget mix of octane and comedy, well…The Grand Tour, backed by Amazon’s limitless coffers, is probably going to be your best bet.