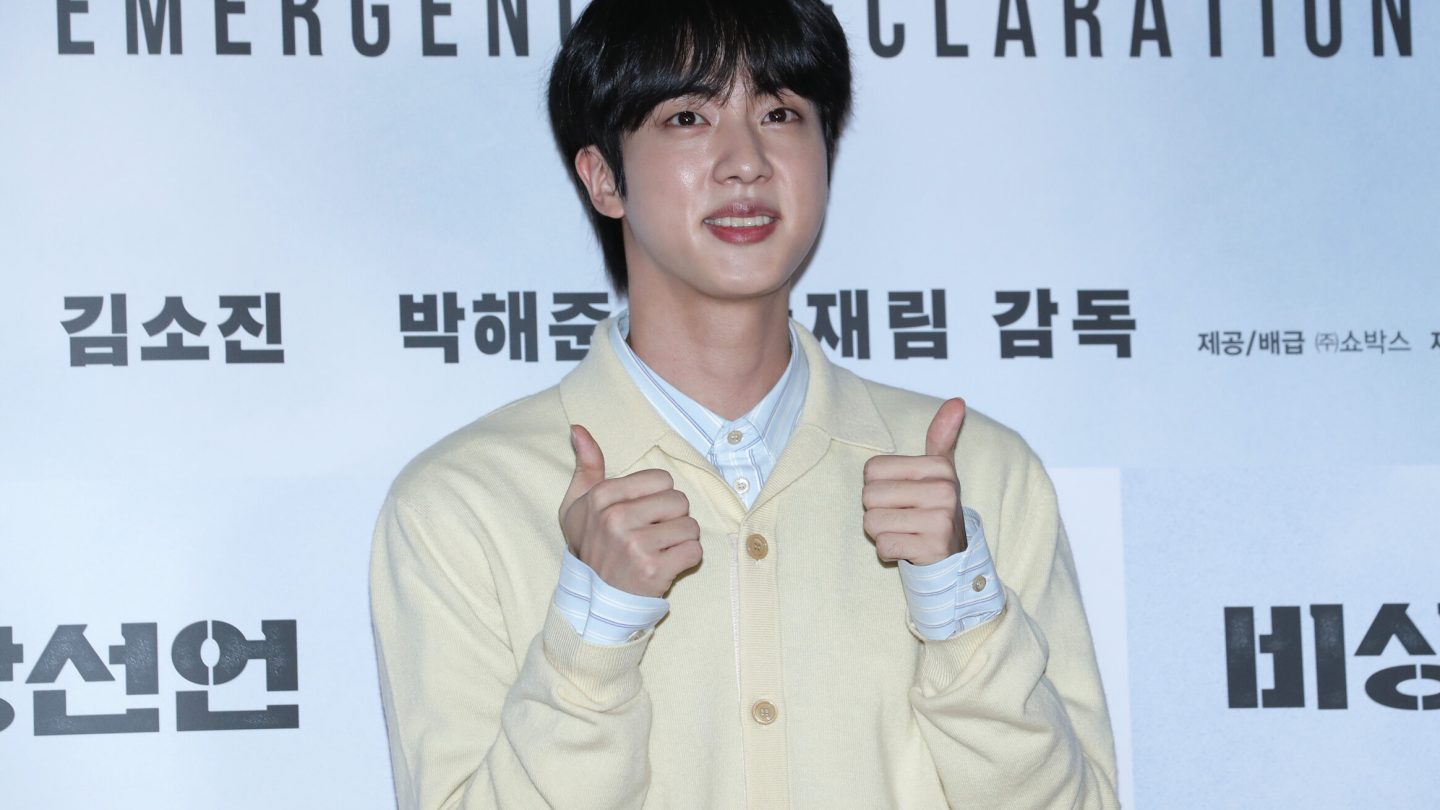 If I knew that I had an unavoidable military enlistment that was fast approaching, and which would require a commitment of 18 months away from home, I can’t say for sure, but I suspect that I might be curled up in the fetal position in the weeks leading up to it, no motivation to work or do much of anything but rest. For BTS member Jin, however — the oldest of the 7-member pop group, and whose mandatory Korean military service is thus coming up first — it’s a totally different story.

The fun-loving Kim Seok-jin — who playfully describes himself as “Worldwide Handsome” and always blows a slow-motion kiss at the crowd during his introduction at BTS concerts — has been, shall we say, a little busy over the last few weeks. He teamed up with Coldplay, for example, to record his solo song The Astronaut, a soaring and bittersweet (albeit temporary) goodbye to his fans ahead of his military enlistment. And he flew across the world, to River Plate stadium in Buenos Aires, to perform the song during a Coldplay show.

Also part of his seemingly never-ending fan service? A new 4-episode reality show, Drunken Truth, which will be available to stream for free on YouTube this weekend.

This show seems to have the same happy-go-lucky vibe of something like BTS’ older reality series Bon Voyage, which I’ve been going back through as a newcomer to the staggering mountain of content this group puts out collectively and on an individual basis.

For the new YouTube show, the focus is exclusively on Jin and his partner, popular chef Baek Jong Won. Jin, among other things, learns how to make his own alcohol, which strikes me as the perfect mission for a pop star who has in the past recorded his own mukbang show that consists of Jin filming himself eating. The first two episodes of Drunken Truth will be available to stream on the official BTS YouTube channel, BANGTANTV, on November 12, followed by the two final episodes on November 19.

It’s also nice to hear Jin, at one point in the trailer for the new show above, singing “There is no oooooooone else” — which is, of course, a line from The Astronaut, the official music video for which has already racked up almost 40 million views on YouTube since its release two weeks ago.

‘I get heaven to myself’

Speaking of The Astronaut, the song earned Jin his first solo entry on Billboard’s Hot 100 chart, which the publication putting its debut at No. 51 with almost 5 million US streams and 44,000 downloads sold during the first tracking week following its October 28 release.

This news makes Jin the fifth BTS member to earn a solo hit on Billboard’s Hot 100.

To be sure, the milestone is extremely bittersweet for the tens of millions of BTS fans around the world known as the group’s “ARMY,” since the band’s label has previously released a statement explaining that once promotional efforts around Jin’s The Astronaut wind down, at that point he’ll “follow the enlistment procedure” that all Korean have to abide by, before a certain age.

In hindsight, it feels very Jin to decide to put out one song before his enlistment begins — a song explaining his feelings about the BTS ARMY — and then fly across the world to perform it live, just one time.

More BTS ‘Yet to Come’

As we alluded to above, though, if you look up the dictionary definition of “fan service,” in a just world what you’d find there is the band’s official two-trapezoid symbol, representing open doors.

You don’t even have to be a fan of the group to appreciate the level of content and interaction with fans that they have released throughout their career. Disney Plus, for example, has become the indispensable streamer for fans of BTS, given that it’s the streaming home of a fantastic BTS concert film revisiting the Los Angeles shows from the band’s Permission to Dance tour at the end of 2021.

Disney Plus last month also debut a new reality series called In the Soop: Friendcation, an extension of the BTS-centric reality series of the same name carried by the online platform Weverse and which lets viewers follow BTS as they take a break from the hustle and bustle of pop superstardom to relax with each other in a remote location. In the “Friendcation” edition, viewers follow BTS member V and his friends from various entertainment fields — including Park Seo-joon, who’s part of the cast of the upcoming Captain Marvel 2: The Marvels — as they set out on a four-day vacation together.

“We were able to reach this far thanks to BTS. They were our starting point and the driving force throughout the way. We, including BTS think that we could not take a single step without ARMY. We've went through everything together in the process…” pic.twitter.com/FI9t4cgG1l

Also, a documentary focused entirely on BTS itself, titled BTS Monuments: Beyond the Star, is coming to Disney Plus in 2023.

The individual band members are also using the group’s current hiatus, which is largely a function of the required military service, to release individual projects as Jin did with The Astronaut. Next up? Group leader Kim Namjoon, who’s putting out his solo album titled Indigo on December 2.