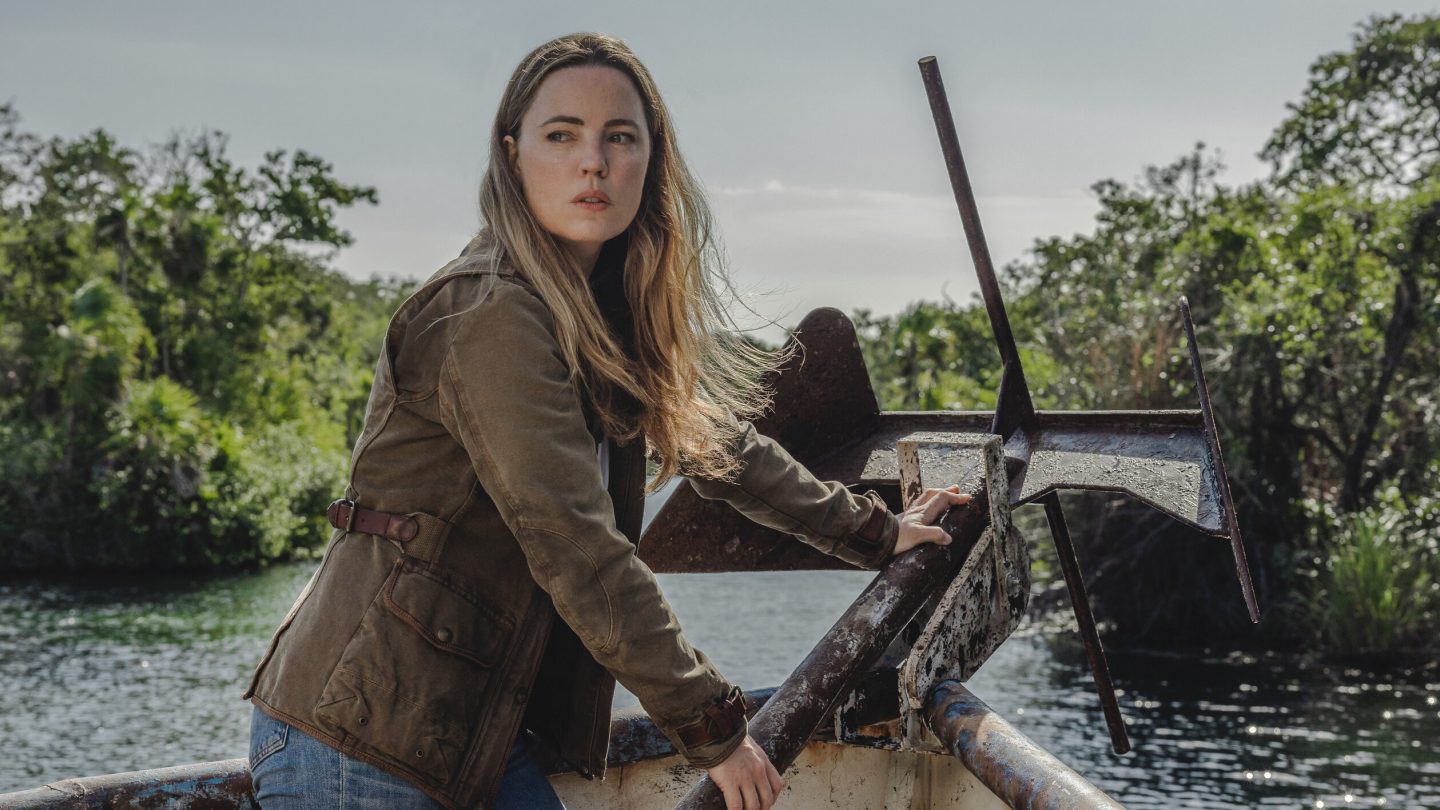 When Melissa George was first offered the role of Margot Fox — the long-suffering yet steely and determined wife and mother in Apple’s drama The Mosquito Coast — it was the kind of invitation that briefly gave her pause. “If you’re game to play Margot …” she was told, in such a way that made her wonder, wait, hold on … what am I getting myself into here?

That is to say, it wasn’t readily apparent to her the extent to which this show, which just debuted its 10-episode second season on Apple TV Plus, would unfold on location in the brutal jungles and dusty small towns of Mexico. Nor the hardcore nature of the narrative, which sees the Foxes (Melissa’s Margot, plus Justin Theroux’s Allie, along with their two kids) living off the grid and on the run, dodging a cartel, US federal agents, and much more.

The Mosquito Coast on Apple TV Plus

Nevertheless, there it was — the offer to George: “This’ll be a very hard journey. A very hard role.”

She didn’t say no — for reasons that actually make this show a little difficult to write about. That’s because The Mosquito Coast is really a cartel drama inside a family-on-the-run story that’s also nestled, in turn, inside a basic fish-out-of-water narrative. And that same multi-layered dynamic is certainly as true for the individual characters themselves as it is the larger world of the show (Episode 2 of which, titled Least Concern Species, just hit Apple’s streamer on Friday).

“With this woman, it was one of the most colorful, misplaced yet perfectly put-together characters of not just one thing but so many things,” George told me, about the character of Margot. No spoilers about her, by the way, but right away in Episode 1 (titled The Damage Done) there’s a huge reveal by way of a flashback that will change a good bit of what you thought you knew about the show during its inaugural season.

Apple TV really hasn't missed on any of the shows I've watched. Ptolemy Grey was really good. Now onto s2 of The Mosquito Coast.

‘You can bet something bigger’s coming’

The big narrative arc of Season 1 of the show basically saw the Foxes making a mad dash south of the border. Allie is a brilliant inventor who shadowy government agents are chasing for some unexplained reason, which leads him to pack up the family and get out of Dodge.

Throughout the entirety of the season — which critics and fans largely seemed to be unable to make heads or tails of, based on the Rotten Tomatoes scores — the Foxes, with a nonplussed Margot in tow, sneak their way into Mexico. There, they spend the duration of the season trying to work out how to survive, without being killed by cartel goons, or worse.

Season 2 subsequently does a curious thing, which George told me was a function of episodes getting moved around as opposed to a calculated decision on the writers’ part. In the new season premiere, we learn that it’s … well, a certain thing that Margot has done in her past which seems to have driven everything that happened to the family since. The reveal is, in fact, big enough that it reminds me of a warning delivered by one of the federal agents to his superiors at one point this season about the fugitive family Fox:

“You can bet something bigger’s coming,” he warns, about what he thinks the Foxes might be involved with. “Something big, and something noisy.”

“What I loved is if you look back — if you get through Season 2 and then look back at Season 1, you see (Margot) in these librarian glasses and that she’s a very loving mom. And then … you see how fast she packed those kids’ bags, and got into the car like a ninja. And you start to see — oh, wow, she’s a really good driver. Oh, wow, she’s severe. Oh, wow, she can get them out of that situation — how come? That’s what I loved about the role.”

Early on in the new season, as the family rides on a dilapidated boat floating down a jungle river, Margot tells Allie ominously, about the kids: “We need to tell them the truth.”

The truth that the kids didn’t know at that point — and what you and I didn’t either — is that Allie had created a computer program that could make sense of and derive patterns out of huge data sets. Useful for everything from predicting climate and weather patterns to … well, whatever else a shady government agency that wants to get its hands on that software could think of.

Margot, meanwhile, is an environmental activist who’s not afraid to, shall we say, flirt with the dark side. Needless to say, there’s a lot of truth they kept hidden — both from the kids, and from us.

Having watched the entirety of Season 1 and now Season 2, The Mosquito Coast has elements of shows like Lost and a Narcos-style cartel drama, though it doesn’t commit fully to a single approach or a single genre. To some critics, the resulting effect is scattershot and a narrative mess. As for myself, the storylines involving, for example, the teenaged Fox children aren’t as interesting this time around and slow things down a bit. Other critics seem to point to things like that as evidence of the show biting off more than it can chew.

In point of fact, though, The Mosquito Coast has too much going for it to be so easily dismissive. Ian Hart’s cartel enforcer with a Southern accent is malevolence personified. Theroux completely surrenders himself to the role of the perpetually ballcap-clad Allie — and, similarly, George is not playing a role here. She is Margot Fox, for better or worse. The show’s visuals are sumptuous, the soundtrack is sublime, and while the narrative might be a bit weak in places it’s certainly no fault of the actors who all turn in fine performances. Don’t think about it too much, just let the show take you away and it’ll do the job.