Microsoft’s Notepad app for Windows 10 gets its first update in a long, long time

While the Windows platform has been repeatedly overhauled and updated over the years, some of the most popular first-party apps on the operating system have failed to receive the same treatment. One of those apps is Notepad, but after being ignored for years, it will finally get a few new features in the coming months.

In a blog post this week, Windows Insider program employees Dona Sarkar and Brandon LeBlanc shared a sweeping list of updates that will be featured in the latest Windows 10 Insider Preview Build, including more options for signing in, changes to Windows Ink, and a host of improvements for Microsoft Edge, the Edge PDF reader, and Windows Defender Application Guard. But the updates for Notepad were the ones that stood out.

Build 17713, which is available now to all Windows Insiders in the Fast ring, will give Notepad users the ability to do wrap-around find and replace for the first time. Notepad will also remember previously entered values and the state of any checkboxes and automatically populate those when you open the find dialog. Plus, if you highlight a word or phrase and then open the find dialog, anything you’ve highlighted will be automatically filled in. 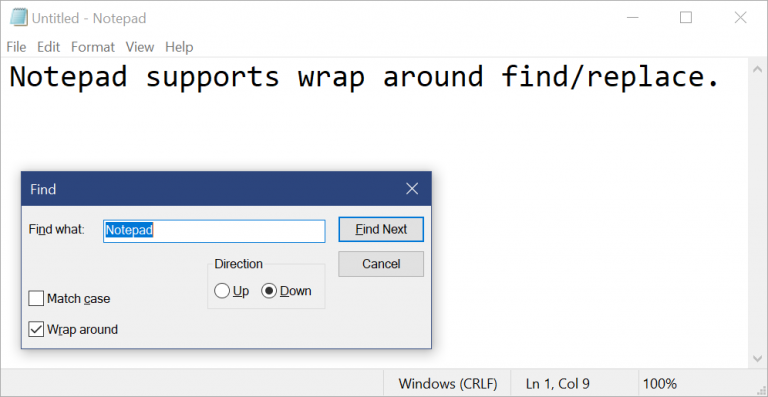 The updated Notepad also adds text zooming. You can either navigate to the menu and select View > Zoom, or use Ctrl + Plus, Ctrl + Minus and Ctrl + MouseWheel to zoom in and out. Ctrl + 0 restores the default zoom level.

Other improvements include the ability to display line and column numbers, even when word-wrap is enabled, better performance when opening large files, Ctrl + Backspace to delete the previous word, arrow keys correctly unselecting text before moving the cursor, and some other simple but necessary bug fixes.

If you’ve in the Fast ring of the Windows Insider program, you can download the latest build and begin playing with the new Notepad now. The rest of us will have to wait for Redstone 5 later this year.

Tweet
The new MacBook Pro keyboard may be quieter, but is it more reliable?