How to use Nintendo Switch controllers with your NES Classic Edition

Thankfully, if you bought a Switch as well, you can actually use your Joy-Con controllers or your Pro Controller with your NES Classic. All you need is a cheap wireless dongle and a firmware update.

Not long ago, 8Bitdo released a Retro Receiver for the NES Classic Edition to give owners the option to pair Bluetooth controllers with their wireless game controllers. This week, 8bitdo rolled out a firmware update for the Retro Receiver that would allow it to connect with the Joy-Cons and Switch Pro Controller. CNET’s Scott Stein installed the firmware, plugged in the receiver and found it to work without a hitch. 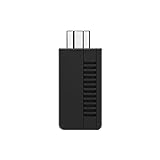 While the lack of a D-pad will certainly make the Joy-Con a less than ideal partner for the NES Classic, it’s petite form factor makes it one of the better travel controllers available. On the other hand, the Pro Controller is one of Nintendo’s best controllers since the WaveBird, so if you have to choose, that’s probably the way to go. Either way, it’s nice to see some interoperability between Nintendo’s latest devices.