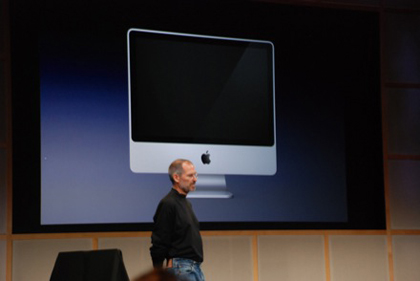 Fellow Apple fanboys rejoice — our leader has just announced a plethora of new goodies and the best part, you ask? Well, most of them are available now. That’s right, guys. We’ve got brand new iMacs which are available today, along with a brand new iLife, and a revamped .Mac service! The new iMacs sport Core 2 Duo processors up to 2.4GHz, up to a TB of hard drive space, 3 USB ports, 1 FireWire 400 port, and FireWire 800 port. The 20′ iMac has now replaced the 17′ iMac and pricing will start at $1199 for the base 20″ model, and level off at $1,799 for the 24″ one. Now, who wants to run down to the Apple store and pick me up a copy of iLife ’08?