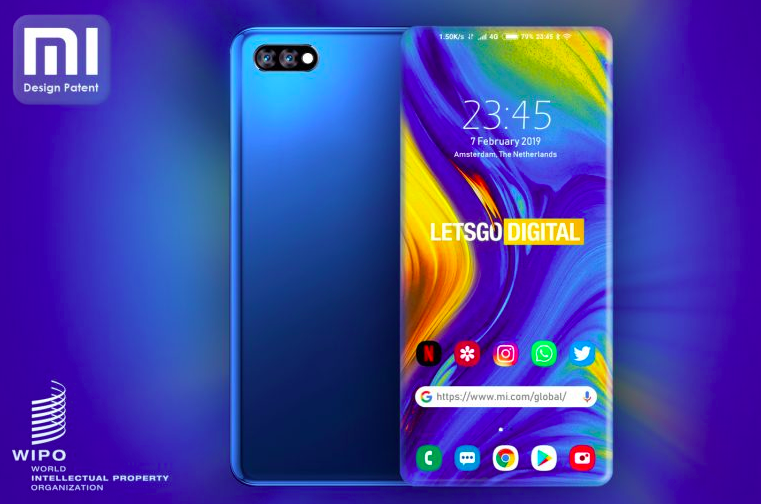 Xiaomi has been in the headlines recently for a few different developments, including the folding smartphone it’s working on, as well as its 5G smartphone that’s also on the way, and the China-based company will no doubt attract more attention during Mobile World Congress 2019 when its new phones are in the spotlight. Meanwhile, we’ve also got a new tidbit from the company to lust over — the design for a gorgeous, 4-sided edge display the company has just patented, as spotted by Dutch blog LetsGoDigital.

The blog sets up its reporting of the new design patent from Xiaomi, from which it prepared the rendering you can see above, by noting that while Xiaomi is one of the largest smartphone makers in China, it’s got something like 5% percent of the total market share in Europe (and of course you can’t buy the company’s handsets here in the US at all). In the blog’s home country, there’s no Xiaomi shop or retailer — the point being, if the company wants to ever break out of its home market, it will need to rely in part on innovation to get noticed.

Which brings us to the new design.

Xiaomi’s patent was published in the Global Design Database of the World Intellectual Property Office a few days ago. It depicts, among other things, a full-screen smartphone that sports a dual camera on the back.

Per LetsGoDigital, the really interesting thing about this device is the display that’s rounded on all four sides. There’s also no button on the screen, which comprises up to half the thickness of the housing, according to the site. We’re left to make assumptions about the front-facing camera, which could be situated under the screen. As the site goes on to note, Xiaomi introduced the Mi Mix 3 last year, which was the “world’s first full-screen smartphone with a slider camera that houses a dual front camera.”

Perhaps Xiaomi’s acquisition of rival Meitu late last year will also come into play here, with the company’s selfie apps possibly playing a part in forthcoming Xiaomi handsets like this one.

Chinese brands don’t always have the best track record in terms of garnering a solid commercial foothold in Western markets, for reasons that are really the subject of another blog post at another time. However, it’s certainly interesting to point out that designs and attention to detail like what Xiaomi apparently wants to attempt here continues to underscore the break that Chinese smartphone manufacturers have made from the past, when many of them were considered cheap, utilitarian — borderline disposable, even. A few brands have even managed to win fans in places like Europe and the US, like OnePlus. This Xiaomi design is admittedly gorgeous, and we’d certainly love to use one that looks like this, though, of course, beauty is in the eye of the… well, you know the rest.