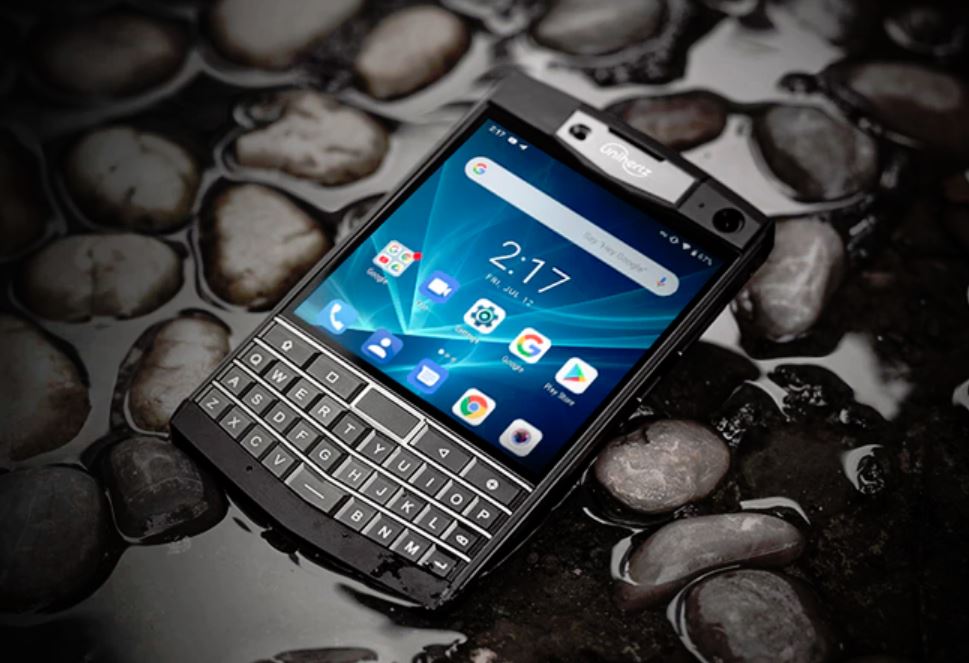 It goes without saying, but BlackBerry isn’t what it once was. The brand, which now relies on partners to manufacture its devices, has had a tough time sparking interest in its various smartphones. But there are still plenty of people who love having a physical keyboard on their smartphone, and Unihertz — the company that launched a pint-sized 4G Android phone back in 2017 after a successful Kickstarter campaign — sees an opportunity.

The company’s newest effort is called the Titan, and it lives up to its name in a number of ways, not least of which is its size. The phone features a large, backlit QWERTY keyboard that doubles as a trackpad, a 4.5-inch touchscreen, and a beefy design with IP67 water and dust resistance.

In terms of important specs, the phone is powered by a massive 6000 mAh battery that sends its juice to a 2GHz, eight-core processor. The phone comes with 6GB of memory and 128GB of storage. A single rear lens snaps 16MP photos while an 8MP lens faces the front. The large central button on the front of the device is both a home button and a fingerprint sensor, and the phone supports wireless charging as well.

The Titan (pictured next to an iPhone X above) is huge. It measures 6 inches tall and 3.6 inches wide. That’s roughly as tall as an iPhone XS Max but over a half-inch wider. It also weighs in at a hefty 10.6 ounces (compared to 7.3 ounces for the XS Max, if we’re comparing big phones).

If you like toting around a tiny little phone, this ain’t it, but that’s not necessarily a bad thing. I didn’t find the size to be a problem when using it for this review, but I also have a history of preferring obscenely large phones, so take that for what it’s worth.

The keyboard is a mixed bag of sorts. It feels good, with firm keys and absolutely zero key wobble, and actually typing things out is a breeze. Because the phone is so tall and wide, there’s plenty of room for large keys, and Unihertz made the most of it.

That said, there are a couple of issues, including the aforementioned backlighting. The keys aren’t uniformly lit and the rows on the sides of the phone are significantly brighter than the rest of the keys.

The uneven lighting is easy to overlook but what’s less forgivable are the significant issues with the keyboard’s touch features. You can use the keyboard to swipe and gesture by dragging your finger across it, which is great when browsing a web page or scrolling through an app, but the feature isn’t particularly smart, registering scrolls and swipes during password entry or regular typing. This leads the screen to scroll away from text-entry fields while you’re in the midst of typing into them, and that’s pretty frustrating.

The screen is a high point, and at a resolution of 1,400 by 1,400 it’s incredibly sharp and looks great. However, the 1:1 aspect ratio leads to some issues with apps, including first-party Google apps like YouTube and Chrome. For example, tapping the full-screen icon on a YouTube video rotates the video so that it’s sideways on the device. This would make perfect sense on a phone screen that is taller than it is wide, but it’s totally pointless on a square display. I guess we’ll chalk that up to an Android quirk.

The simple fact is most apps weren’t built for a square display, and as good as Android is at adapting some apps to work on a 1:1 aspect ratio, many are quite difficult to use on this device. Pokemon Go, for instance, is basically unplayable due to everything on the screen being either too big or far too small. If you’re using the device strictly for web browsing, email, and messaging you’ll be just fine, but it’s worth considering how your favorite apps will deal with the Titan’s display.

One of the Titan’s biggest areas of appeal is its price. The phone can be had for as little as $259 via the Kickstarter campaign, and that’s a mighty appealing price for a smartphone with features like a fingerprint sensor, wireless charging, and water resistance. Unihertz is positioning it as the best option for a person who wants a rugged phone with a keyboard, and it’s hard to argue with that.

As a business-minded device, it definitely pulls its weight, but it’s probably not going to be anyone’s first choice for media consumption or entertainment apps.