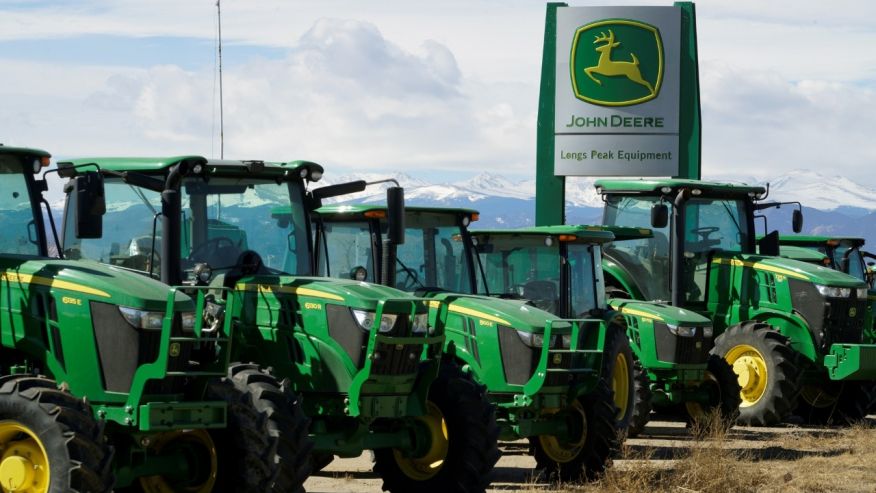 Farming was simple once. It was hard, backbreaking work, but it followed a basic formula: You plant it, you grow it, you harvest it.

Then the tractor came along, and it became a little less backbreaking.

But that was way back in the 20th century. Here in the 21st, farming is making the transition from backbreaking to head-spinning, thanks to all the high-tech Silicon Valley doodads tractor makers are planting in their products.

Today, if you’re a farmer in the heartland of America who wants to keep planting it, growing it and harvesting it with the help of your trusty tractor, nothing is simple anymore — especially if your tractor breaks down.

FARMERS FIGHT FOR THE RIGHT TO REPAIR THEIR OWN TRACTORS

That’s when your new best friend may turn out to be a shadowy software hacker living in the Ukraine.

As reported in Motherboard, a thriving crop of black-market hackers in Europe is creating and selling software hacks to John Deere software, which local mechanics in America’s breadbasket are downloading and using to repair the company’s tractors.

“When crunch time comes and we break down, chances are we don’t have time to wait for a dealership employee to show up and fix it,” Danny Kluthe, a hog farmer in Nebraska, told his state legislature earlier this month. “Most all the new equipment [requires] a download [to fix].”

But farmers who buy new John Deere equipment must sign a license agreement that forbids nearly all “unauthorized” repair and modification to the company’s machines that contain embedded software. You can tinker under the hood, but don’t mess with the software.

“You want to replace a transmission and you take it to an independent mechanic — he can put in the new transmission, but the tractor can’t drive out of the shop,” Kevin Kenney, a farmer in Nebraska, told Motherboard. “Deere charges $230, plus $130 an hour, for a technician to drive out and plug a connector into their USB port to authorize the part.”

But if your local mechanic does a little searching on the internet, there’s a good chance he’ll find just what you’re looking for.

“What you’ve got is technicians running around here with cracked Ukrainian John Deere software that they bought off the black market,” Kenney said.

According to Motherboard, Nebraska is one of eight states that are considering right-to-repair legislation that would invalidate John Deere’s license agreement, which also prevents farmers from suing for “crop loss, lost profits, loss of goodwill, loss of use of equipment … arising from the performance or non-performance of any aspect of the software.” John Deere, predictably, is opposing such legislation.

“Software modifications increase the risk that equipment will not function as designed,” the company continued. “As a result, allowing unqualified individuals to modify equipment software can endanger machine performance, in addition to Deere customers, dealers and others, resulting in equipment that no longer complies with industry and safety/environmental regulations.”

Thanks to an exemption to the Digital Millennium Copyright Act that applies to land vehicles, modifying embedded software may be legal if it “is a necessary step undertaken by the authorized owner of the vehicle to allow the diagnosis, repair, or lawful modification of a vehicle function.” — provided that it continues to meet emissions regulations.

Whether it’s legal to download cracked software hasn’t been answered yet. But whether it is or isn’t, it’s available.

“There’s software out there a guy can get his hands on if he looks for it,” a farmer and repair mechanic in Nebraska who uses cracked John Deere software told Motherboard.

“I’m not a big business or anything, but let’s say you’ve got a guy here who has a tractor and something goes wrong with it — the nearest dealership is 40 miles away, but you’ve got me or a diesel shop a mile away. The only way we can fix things is illegally, which is what’s holding back free enterprise more than anything and hampers a farmer’s ability to get stuff done, too.”