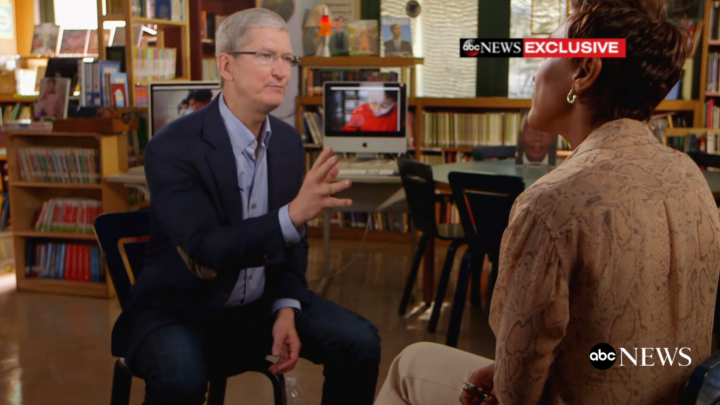 Ahead of the iPhone 7 launch on Friday, Apple CEO Tim Cook has started doing the rounds on TV. The first stop was ABC’s Good Morning America, where Cook discussed everything from iPhone 7 design, to his morning runs and the future of augmented reality versus virtual reality.

Speaking about AR and VR, Cook said “my own view is that augmented reality is the larger of the two, probably by far, because this gives the capability for both of us to sit and be very present talking to each other, but also have other things visually for both of us to see. Maybe it’s something we’re talking about, maybe it’s someone else here that is not here, present, but could be made to appear to be present with us. So there’s a lot of really cool things there.”

What Cook may be not-so-subtly hinting at here is Apple working on some kind of AR tele-conferencing system that lets you virtually bring people into meetings, phone calls, school lectures or the like. It’s not the hyper-cool future we’ve all been promised — it’s not even as visually exciting as Microsoft’s VR spider-fighting games — but it sure is a practical and grown-up application of new software.

Apple has been rumored to be working on some kind of VR/AR platform for a while, but this definitely tips the scales in favour of AR. That lines up well with recent hardware releases, since the dual-camera system on the iPhone 7 Plus could easily be adapted for a 3-D AR camera.

In the interview, Cook also talked about one of the AirPods’ most criticized flaws, namely that they’ll fall out all the time. He says he’s been jogging and dancing with AirPods, and they’ve never fallen out once. Sure, Tim.