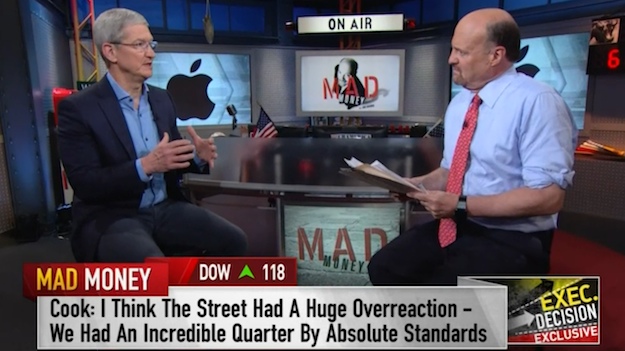 Consequently, the usual contingent of pundits and analysts have come out of the woodwork, all exclaiming that we’ve reached ‘peak iPhone’ and that Apple at this point has nowhere to go but down. In an effort to inject a bit of good news and all-around optimism to a particularly negative Apple news cycle, Tim Cook earlier today appeared on CNBC with Jim Cramer where the Apple CEO teased that the company has some interesting and innovative items in the product pipeline.

“We’ve got great innovation in the pipeline,” Cook said to Cramer. “New iPhones that will incentivize you and other people that have iPhones today to upgrade to new iPhones. We are going to give you things you can’t live without that you just don’t know you need today. That has always been the objective at Apple, to do things that really enrich people’s lives. That you look back on and you wonder, how did I live without this.”

As for the drop in iPhone sales, Cook was quick to call everyone’s doom and gloom scenarios a ‘huge overreaction.’

“We just had an incredible quarter by absolute standards, $50 billion in revenue and $10 billion in profits,” Cook said. “What we’re seeing is that people are upgrading at a lower rate than they did last year, but still higher than the year before. And so we had this abnormally high upgrade rate last year as people bought into the iPhone 6, and now we’re comparing to that along with the other things going on that many companies are facing, with currency rates and macroeconomics etc.”

With respect to the Apple Watch – a device that we’ve still not seen any specific sales figure for – Cook remained nothing short of optimistic. Specifically, Cook reminded viewers that the iPod, one of the company’s most iconic products, wasn’t exactly an overnight success. Indeed, it wasn’t until about 3-4 years after its initial release that the iPod became a runaway hit. In a similar vein, Cook intimated that we should exercise a bit of patience before declaring the Apple Watch DOA.

“And so I think that in a few years we will look back and people will say, how could I have ever thought about not wearing this watch?, because it’s doing so much for you. And then it will all of a sudden be an overnight success.”

Video of Cook’s interview with Cramer can be seen below.