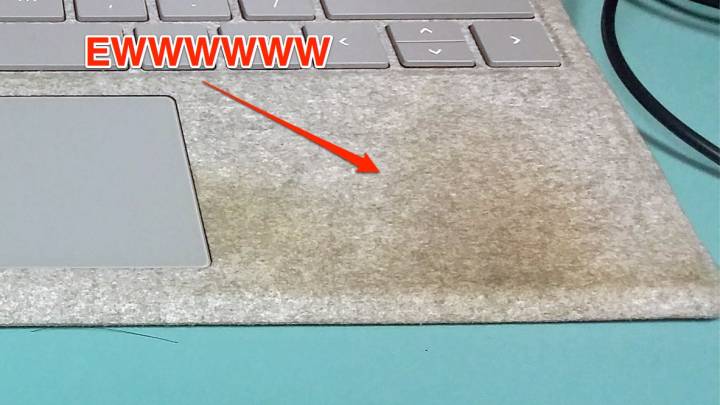 Microsoft’s Surface Laptop — ugh, that name — is one of the more interesting device announcements we’ve seen so far in 2017. It’s a mid-range notebook with a stripped-down operating system designed with simplicity in mind, and carries a not-quite-budget price of $999. It also happens to have an interior adorned with fabric. How luxurious! Unfortunately for Microsoft, there’s a really, really good reason why fabric and electronics don’t usually mingle: humans are gross.

Microsoft didn’t choose just any old fabric for its fancy new laptop. Instead, it sourced color-matched Alcantara, which is essentially a 70-30 mix of polyester and polyurethane. It’s an extremely durable material, and doesn’t physically wear through or fray very easily, which is why it’s a good choice for applications where an object is going to see lots of contact.

However, like anything repeatedly touched by human hands, it’s prone to dirt build up. Even the smooth plastic or metal surface of a smartphone or traditional laptop keyboard builds up dirt and grime over time, but fabric just makes things worse. How much worse? Microsoft’s past use of Alcantara on Surface devices can give us a pretty good idea. That greasy, grimy, oddly brown object you see in the photo above is the Surface Pro 4 “Signature Type Cover,” which also happens to be covered in Alcantara fabric. The photo was posted to Reddit a number of months ago, with the owner of the device begging for advice on how to clean it.

Similar threads can be found on Microsoft forums and other places around the web. Fellow owners often empathize and share their own dirty-keyboard woes, claiming that they’ve resorted to everything from microfiber clothes, alcohol-soaked rags and vacuums (???) to “unscented baby wipes.” The percentage of success seems to be about fifty-fifty with any given method.

Sure, fabric might feel nice on your wrists and avoid that “cold steel” feel of many laptops, but the trade-off is toting around a filthy gadget or performing an obviously much more complicated cleaning process than simply wiping the grime off.