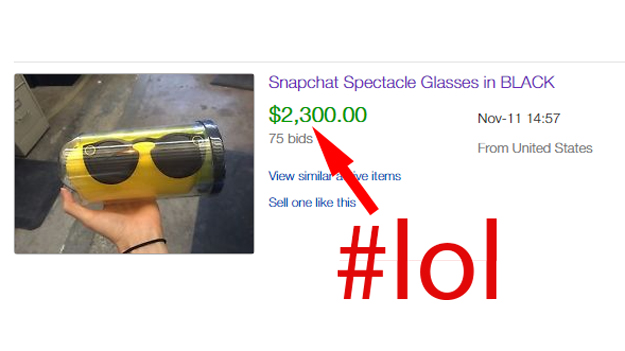 In 1759 Adam Smith, the father of modern economics, wrote that an “invisible hand” guides supply and demand, creating an equilibrium that advances the interests of society.

Well, in 2016, that invisible hand appears to be jerking us around. Exhibit A: people spending $2,300 on a pair of glasses that let you take a photo.

You may have heard from your local tween that Snapchat has released its first piece of hardware, the Spectacles. They allow you to take 10-second snaps with the press of a button, and are generally a more lighthearted and quirky version of the Google Glass headset that Google kinda-sorta-launched a few years ago.

But they’re also in crazy-high demand right now, thanks to Snapchat’s launch strategy. The company has gone full-on press stunt, and is only releasing Spectacles through vending machine ‘drops’ in select cities. So far, they’ve shown up in LA and Big Sur, where obscenely long lines have formed for people to get Spectacles from a vending machine.

As we’re constantly reminded, however, we live in a capitalist utopia that allows the free trade of goods and services, so the secondary market you’d expect has exploded on eBay.

The Spectacles cost $130 from Snapchat’s machine, but far, far more if you have to buy from a middleman. Wired‘s David Pierce spent $600, but it looks like he got a steal.

Browsing eBay’s completed listings for Snapchat Spectacles, it seems that the current going price is around $1,200 a pair. The highest I’ve seen is $2,300 for an individual pair, which is quite the markup over the original sale price. Other pairs have gone for $1,750 and $2,000, so that high price really isn’t that much of an outlier.

I’m not done, though! The completed listings aren’t the craziest things on eBay right now. One self-described “traveler, adventurer & social media influencer” wants to fly a Snapchat Spectacle owner out to Australia’s Gold Coast to adventure with him, and document the entire deal on Spectacles. Free international shipping is included.