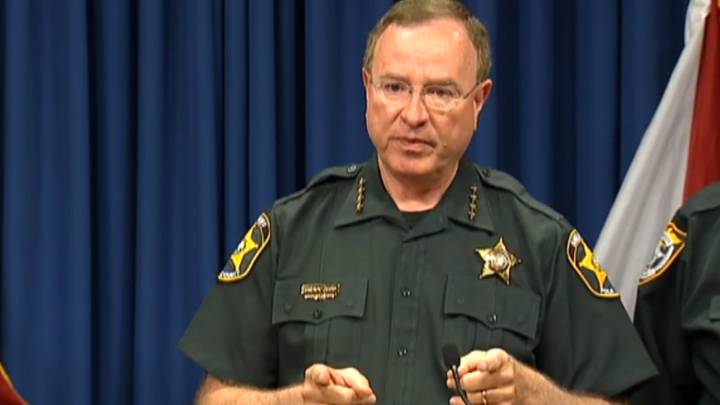 Watch out, Tim Cook — it looks like you have another law enforcement official who’s out to bring you in! It seems one Florida sheriff wants to end the debate between Apple and the FBI by arresting Apple’s “rascal” CEO Tim Cook.

Polk County Sheriff Grady Judd commented on the Apple vs. FBI case during a press conference this week. Police apprehended three suspects that had allegedly beaten, sexually assaulted, and killed a drug dealer in Lakeland, Florida. The three took pictures of their victim’s body and showed it to other people while bragging about the murder.

The suspects did share the passcode of the phone with the police during the investigation, FOX 13 reports.

“You cannot create a business model to go, ‘We’re not paying attention to the federal judge or the state judge. You see, we’re above the law,'” Judd said when asked about Apple’s refusal to allow the FBI access to the iPhone 5c from the San Bernardino shooting. “The CEO of Apple needs to know he’s not above the law, and neither is anybody else in the United States.”

“I can tell you, the first time we do have trouble getting into a cell phone, we’re going to seek a court order from Apple. And when they deny us, I’m going to go lock the CEO of Apple up,” he continued (see the video below). “I’ll lock the rascal up.”

It’s probably likely that Judd would have a hard time arresting Cook in the first place, not only because Cook usually spends his time in California, but also because Apple has a legal army that would likely keep Cook and any other execs out of such troubles. But Judd’s comments go to show that the encryption battle is far from done and that many people, including law enforcement personnel, need to understand what encryption backdoors actually mean – maybe this explanation from Last Week Tonight’s John Oliver could help.