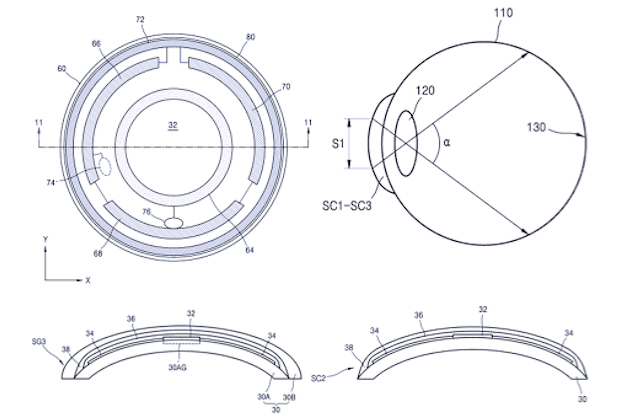 Google’s failed failed first attempt at wearables sounded very exciting at first, though it soon became apparent Glass would not be the hit product the company may have envisioned. Not only was it an expensive prototype during its limited release, but it was also met with huge privacy-related backlash.

Samsung, on the other hand, seems to have the right idea of how to build this kind of product.

Rather than wearing a device on your head, which is an eyesore to say the least, Samsung proposes stuffing all that tech inside a smaller device: A smart contact lens.

A Samsung patent application from 2014 was discovered in Korea, describing what looks like a smart contact lens that sports an embedded OLED display, a camera and Wi-Fi support.

The device would connect to a smartphone via Wi-Fi and work just like Google Glass. The user would see a display in front of his or her eyes, and would be able to control it by blinking. The OLED display would be inserted in between two contact lens layers.

Whether Samsung does build a device like the proposed smart contact in the future remains to be seen. However, it seems more than clear that the next step in computing involves wearing some device that will facilitate augmented or virtual reality, and the eyes are the obvious point of entry. It remains to be seen if AR and VR headset technology can be miniaturized to this extent, of course.

Google does have a smart contact lens project of its own, but its main feature is measuring blood glucose in diabetics – that product is also still in the development stage at this point