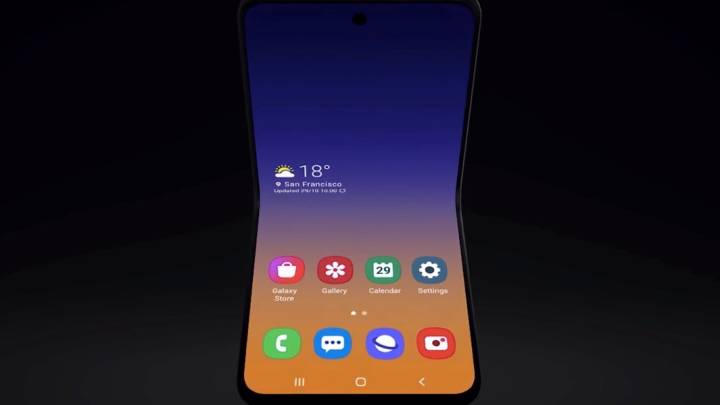 With Samsung’s big Galaxy S20 Unpacked event now exactly two weeks away, there’s something we need to discuss and it has nothing to do with the Galaxy S20, Galaxy S20+, or Galaxy S20 Ultra that will headline the show. It’s about the fourth new flagship smartphone set to be unveiled next week, and we might be even more excited about this one than we are about the Galaxy S20 series.

Samsung’s first foldable smartphone was a piece of junk. Sorry to say it, Samsung fans, but I told you so. In fact, I had been saying for about a year before the Galaxy Fold was even announced that Samsung’s first foldable smartphone would be a piece of junk. How did I know? Do I have a crystal ball? No, I’ve just been doing this for long enough to see certain patterns emerge, and there’s one pattern that is undeniable to anyone who follows the industry: Samsung’s first-generation mobile products are always junk. It was true a decade ago when Samsung first entered the smartphone market and it’s still true today. The company simply can’t stop itself from wanting to be first. Samsung was and still is more concerned with beating rivals to market with new tech than it is with creating good products. I’ve said it once and I’ll say it again: first-generation Samsung smartphones are the physical embodiment of a basement-dweller rushing to shout “FIRST!” in the comments under a YouTube video. Early Galaxy S phones were junk, early Galaxy tablets were junk, Samsung’s first phone with a curved screen was junk, and the Galaxy Fold was junk.

Thankfully, there’s something else I know beyond a shadow of a doubt about Samsung: it’s one of the best companies in the smartphone industry when it comes to refining devices over time. Look at the company’s Galaxy S phones now. While the early models were plasticky and cheap with a horrible user interface, Samsung’s recent flagship phones are arguably the sleekest smartphones on the planet. Based on design alone, I would take a Galaxy S10 over an iPhone 11 any day of the week. Samsung is masterful at improving its mobile products a little bit at a time, and now we’re watching the same old story unfold — pun intended — yet again with the new Galaxy Z Flip.

Samsung’s second-generation foldable smartphone is set to be unveiled on February 11th during an Unpacked press conference in San Francisco. It won’t be called the Galaxy Fold 2, which is actually a good thing. Were I Samsung, I wouldn’t want people thinking of that piece of junk either when they saw my sleek new foldable smartphone. The Galaxy Z Flip is indeed set to be better than the Fold in nearly every way, but there are five areas in particular where Samsung’s new Galaxy Z Flip appears to be a huge improvement over the Galaxy Fold.

The first one is fairly simple: Samsung’s Galaxy Z Flip folds open along a horizontal hinge instead of a vertical hinge. This clamshell design makes far more sense based on the way we use smartphones.

The whole point of buying a foldable smartphone is so that you have a larger display with more usable space that’s still compact enough to carry around. With the Galaxy Fold, the aspect ratio of the screen was practically square so much of the extra space wasn’t really usable. Samsung’s Galaxy Z Flip, on the other hand, will have an aspect ratio that’s much closer to a normal smartphone. It’s better for videos, it’s better for games, and it’s better in general for all-around usability.

Take a look at these fan-made renders of the Galaxy Z Flip. They’re stunning. While they’re definitely not completely accurate, they should end up being a pretty close representation of the new foldable smartphone that Samsung unveils in a few weeks. Horrible design flaws aside, last year’s Galaxy Fold is still a pretty ugly phone. It’s too thick, the hinge is weird, and the inner display is a mess. Based on everything we’ve seen so far in leaks, the new Samsung Galaxy Z Flip will be a huge improvement.

We already spoke about how the aspect ratio on the Galaxy Z Flip’s display will be a huge improvement over the Galaxy Fold. But the display design in general is also so much better, as you can see in this leaked Galaxy Z Flip photo:

This leaked image is believed to show a Galaxy Z Flip prototype, but the release version should be almost exactly the same. It still has huge bezels around the screen, but that’s to be expected in these early days of foldable phones. What you should focus on is the fact that there’s no massive notch chopped out of the top corner like there is on the Galaxy Fold. On top of that, the new Galaxy Z Flip has a modern hole-punch design for the selfie camera. Apple hasn’t even pulled that off on its iPhones yet, and Samsung will have it on a foldable phone!

This rumor is still unconfirmed, but word on the street is that the new Galaxy Z Flip will have a layer of thin, flexible glass atop the display instead of plastic. Flexible plastic is much easier to pull off, which is why it’s used on the Galaxy Fold. But it’s also much more prone to scratching and damage. Corning has been working on flexible glass for smartphones for a while now, but it’s unclear if Corning’s solution made it to the Galaxy Z Flip. Either way, we’re crossing our fingers that this rumor pans out.

Samsung’s Galaxy Fold costs about $2,000. New tech is always pricey, of course, but $2,000 for a piece of junk is obscene and insane. The upcoming new Galaxy Z Flip is better than its predecessor in every way, and yet leaks suggest it will also be far more affordable. According to the most recent information floating around, Samsung’s Galaxy Z flip should end up costing around $1,300 or $1,400. That’s less than a top-of-the-line iPhone 11 Pro Max!