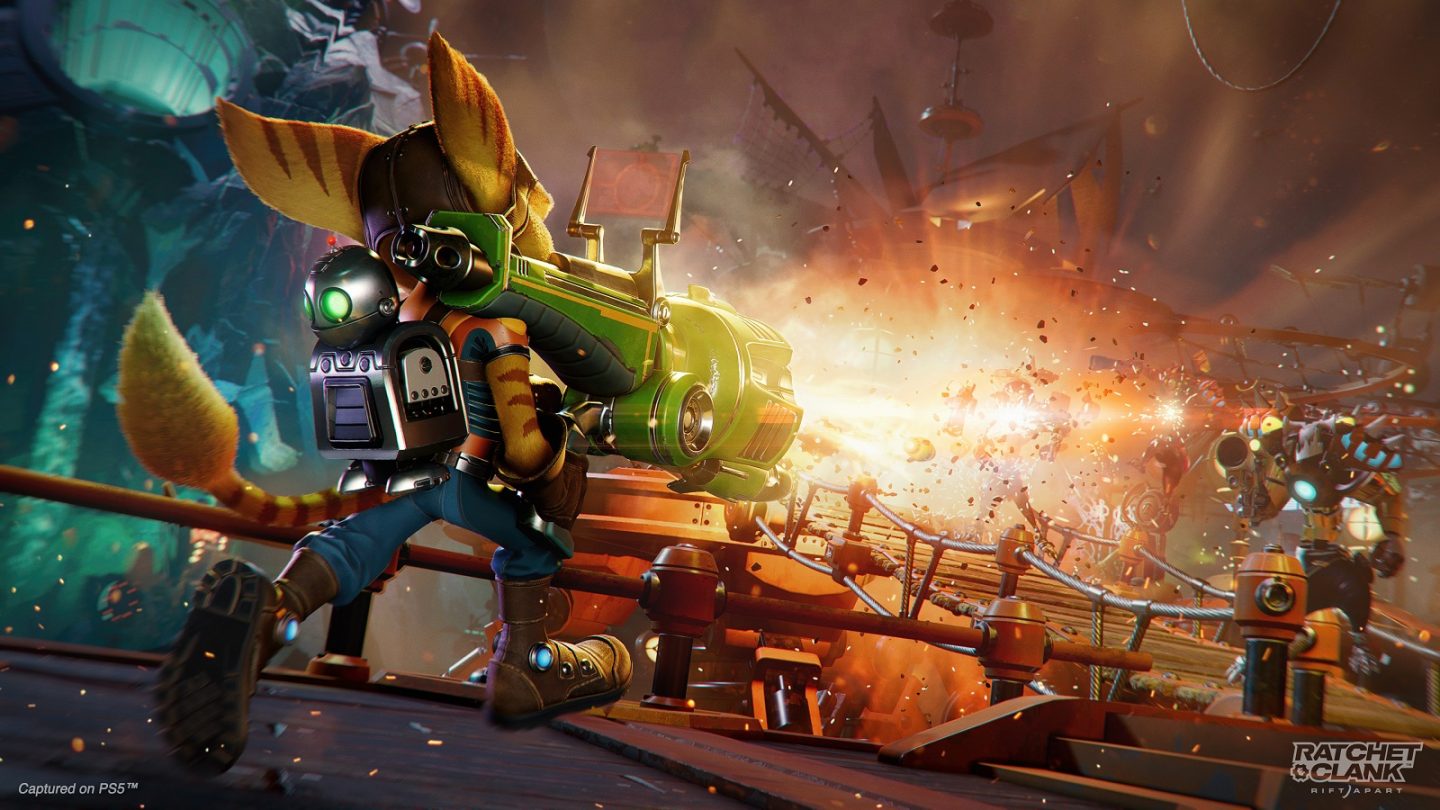 The fact that Insomniac — the same studio behind Marvel’s Spider-Man — has kept the series running after all these years is an achievement all its own, but it would be bittersweet if the first truly new Ratchet & Clank game in nearly a decade was just mediocre. Thankfully, that’s not the case, as Rift Apart is both a worthy sequel to the entries that came before it and a jaw-dropping showcase of what the next-generation consoles bring to the table.

The first thing that you’ll notice about Ratchet & Clank: Rift Apart is that the cutscenes are so smoothly and meticulously animated that you’ll occasionally forget you aren’t just watching the follow-up to the Ratchet & Clank animated movie that came out in 2016. Everything from the facial expressions to the kinetic motion of the characters to the lush, colorful scenery puts this game in the running for one of the best-looking games of all time. I have no doubt that game developers will continue to top themselves throughout this generation, but Rift Apart takes an early lead with its movie-quality animation and painstaking attention to detail.

Of course, the game’s looks wouldn’t mean much if it wasn’t fun to play, but Rift Apart does a brilliant job meshing the tried and true run-and-gun gameplay that has always defined the series with some new tricks that bring the game up to speed for 2021. If you’ve never played a Ratchet & Clank game before, the oversimplified summary is that you have to get from point A to point B by blowing away enemies with an increasingly ridiculous and ever-evolving arsenal of weapons. The wild weapons are the herbs and spices that make Ratchet & Clank games taste different than any of their contemporaries, and the tradition is alive and well in Rift Apart.

Some of my favorites are the Lightning Strike (which shoots bolts of electricity that can electrify enemies), the Apocalypse Glove (which tosses eggs filled with tiny robots that bite enemies to death), the Topiary Sprinkler (which blast enemies with water until they turn into shrubs), and the Negatron Collider (which fires a continuous beam that damages enemies from afar).

The more you use the weapons, the more powerful they become, which incentivizes you to use all of the weapons that you find and purchase throughout the game. Ammo is relatively plentiful, but you’ll need to empty multiple clips to take down some of Rift Apart’s most difficult bosses, which means you can’t always play favorites with your arsenal.

If you have been following the Ratchet & Clank games for the last two decades, you know that one of the throughlines connecting all of the entries is the fact that Ratchet is the last of his kind. He has never met another lombax (a humanoid, cat-like species), but when persistent villain Dr. Nefarious steals the Dimensionator from Ratchet and his robot pal Clank at the beginning of Rift Apart, he opens countless portals to alternate dimensions in search of one where he is actually capable of defeating the titular duo. He eventually finds one, but there also happens to be a female lombax in this dimension named Rivet.

I won’t spoil what happens next, but the characters are as charming and colorful as ever, and having Rivet as a playable character gives the story added texture, even if she is little more than a reskin of Ratchet when it comes to the way that she plays. That said, Jennifer Hale does a great job as the voice of Rivet, and it seems inevitable that she will continue to play a major role in the franchise going forward.

Following the dimensional incursion, Ratchet and Rivet embark on a planet-hopping journey in order to stop Nefarious and save the universe. Beyond blasting foes with upgradeable weapons, the two lombaxes also have to use a variety of tools and objects to navigate dangerous locales, from grinding on rails to swinging between nodes to walking upside-down on magnetic surfaces.

My favorite additions to the tool belt in Rift Apart were the Omniglove and the upgraded Hover Boots. The Omniglove allows Ratchet and Rivet to tether themselves to dimensional rifts, which is especially useful when a hail of bullets is heading in their direction and they need a quick escape plan. It also enables the Phantom Dash, which makes the lombaxes temporarily invincible as they dash in or out of combat. But the Hover Boots are the star of the show in Rift Apart. If you hold down the R1 button, Ratchet and Rivet will begin boosting across the landscape, and you can press L2 to gain speed. There are plenty of side missions and collectables scattered around the planets you visit, as has always been the case in this series, but backtracking is easier — and more enjoyable — than ever with the Hover Boots.

For better or worse, Rift Apart feels like a natural extension of the existing franchise, rather than a God of War-style reboot. As an unabashed enthusiast of mid-2000s platformers, this wasn’t an issue for me, but there certainly are not many popular games on the market quite like Ratchet & Clank nowadays. But in addition to being a blast from the past, Rift Apart is also a window into the future, because Insomniac built this game from the ground up — be it the events that drive the story all the way down to the ways in which the characters move through the environment — to take full advantage of the power of the PS5.

As in Marvel’s Spider-Man: Miles Morales (another Insomniac game for the PS5), load times are nonexistent. Whether you’re booting up the game or warping from one planet to another, nothing takes more than a few seconds, and while I am aware that this is going to be the case for most, if not all, PS5 games, it still blows my mind. Then there are the pocket dimensions scattered throughout the various worlds which contain short platforming challenges and reward you with cosmetic armor pieces. Once you open them up, you can see an entirely new setting through the portal, but there isn’t even an instant of hesitation on the game’s part when you walk through. So much of this game would have seemingly been impossible to achieve on the PS4.

Ratchet & Clank: Rift Apart is as much a showcase for the PS5 as it is an outstanding addition to one of the longest-running PlayStation franchises of all time. The fact that Insomniac Games is capable of releasing a game of this quality just seven months after Miles Morales hard to even wrap my head around — much like the alternate dimensions of Rift Apart. By the time the credits rolled, I was already itching for a sequel, and that’s about the highest praise I can offer a game.