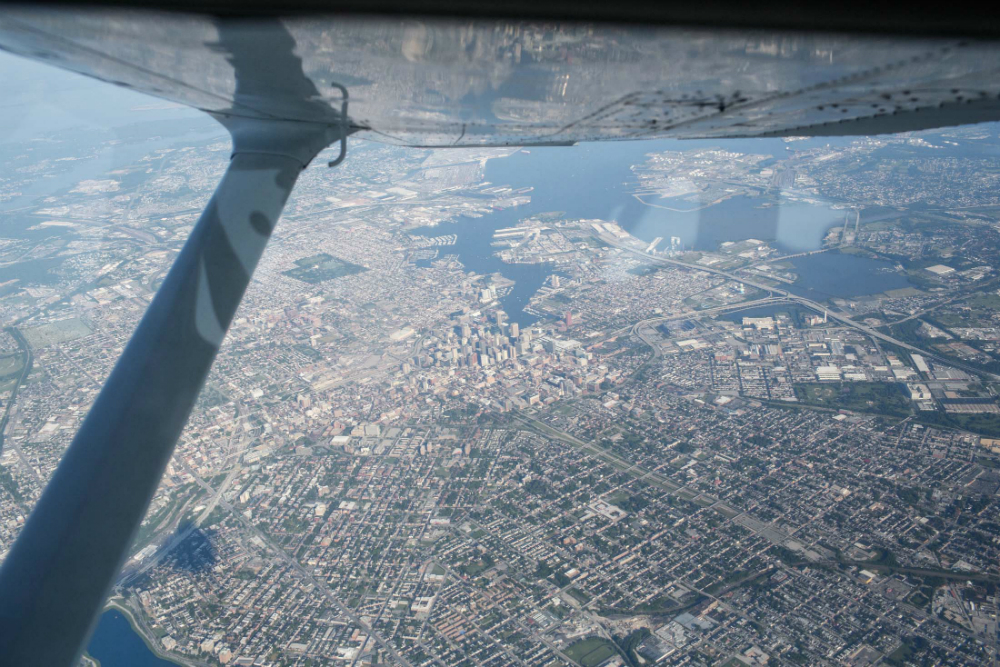 “Imagine Google Earth with TiVo capability.” That’s how the impressive, and very high-tech, one company’s real-time surveillance system is sold to interested parties. In short, Big Brother is here, and as time goes on it’ll get only better at seeing everything you do.

Mounted on a Cessna plane that can hover above a city around the clock, an array of wide-angle cameras produce 192-megapixel images of an area that measures roughly 30 square miles, constantly beaming the images down to hard drives that store them indefinitely. Sitting at their desks, analysts can sift through the available images and move backward and forward thorough time to search for clues that might help law enforcement.

The system may not be able to identify a person, which measures about a pixel, and can’t magically read license plates numbers by simply magnifying a blurry image like you see in the movies. Instead, it’s able to track objects and identify patterns. Analysts can tell police what a person did after he or she killed or robbed someone, for example. They can track a getaway car to see where it stopped, and they can go back in time to see how it arrived at the crime scene in the first place.

Police can then combine that data with street cameras and footage from other locations that offer local surveillance, giving them a better chance of apprehending suspects.

This isn’t the plot of an Enemy of the State sequel. It’s actually happening in the US right now, with a privately funded program underway in Baltimore, Maryland. At $2 million per year, the program is cheaper than police helicopters and it could help out with the city’s aim of lowering crime rates. But in the wrong hands, the technology can be devastating, as it’s essentially invading the privacy of every individual in the city.

In Bloomberg Businessweek’s massive expose, you’ll learn exactly how this type of surveillance came to be. It all started in Iraq for Persistent Surveillance Systems’ CEO Ross McNutt, where he provided a similar system that the Army could use to investigate bombings. Upon his return, he founded a private company that deals in professional surveillance. His object is to prevent crimes, and he says the system is designed in such a way that analysts looking at images would not be able to track targets for personal reasons, since everything is logged.

However, as successful as the Baltimore project might be, it’s still something local police would not acknowledge. And something regular citizens might not appreciate because of the obvious privacy implications.

If this type of spying sounds similar, that’s because law enforcement agencies have used similarly sophisticated surveillance systems mounted on planes in the recent past. Called StingRays, fake cell phone towers that can be installed on small plans can also help agencies spy on a community. And yes, before you ask, it appears that StingRays were also used in Baltimore as part of this new program.

McNutt’s firm isn’t the only one selling surveillance to cities, and as camera and computer technologies evolve we’ll only see more advanced systems ready to track everything we do from up above. Bloomberg’s story, complete with video, is available in full at this link. Definitely check it out.