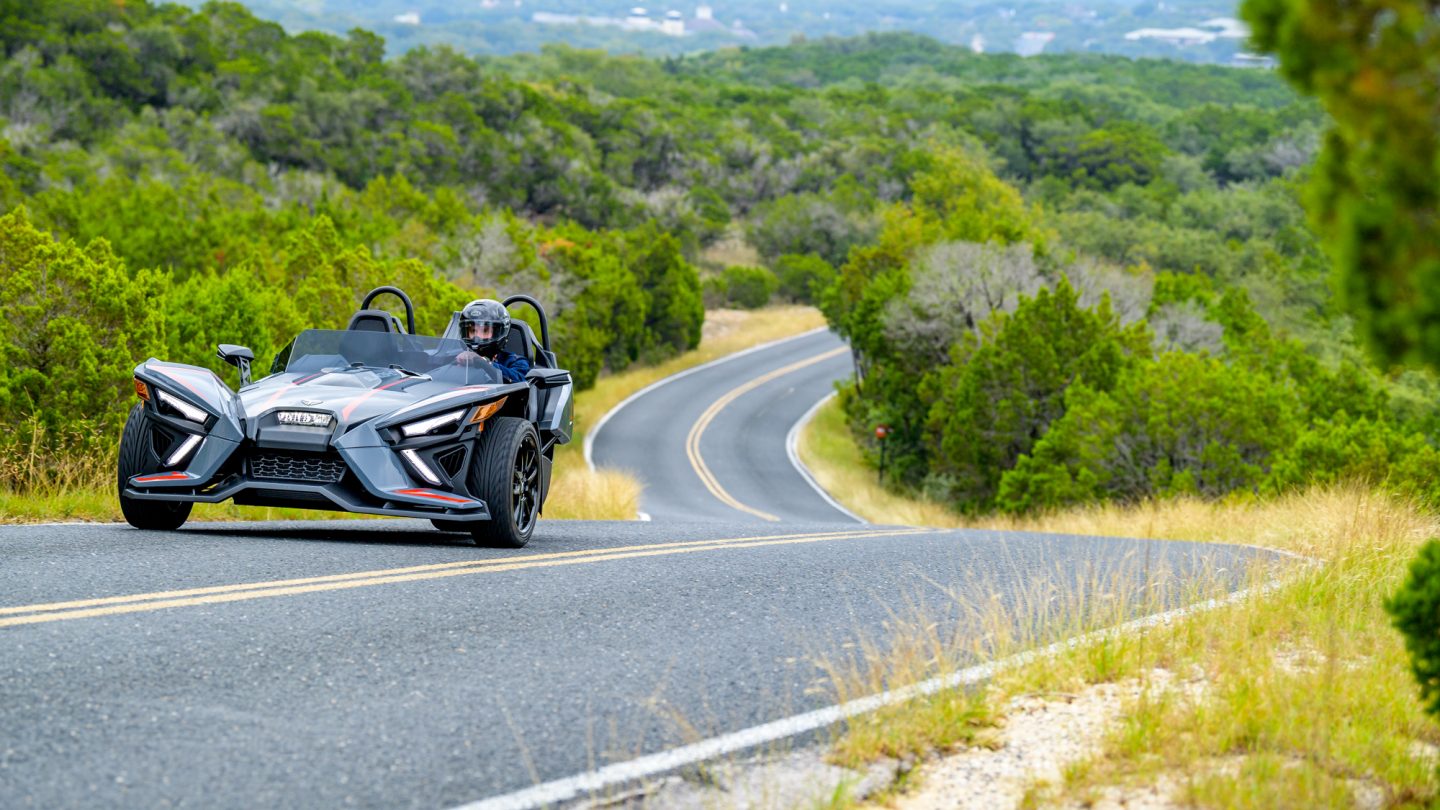 What’s the first thing you do when you get to a new city? Check into your hotel, perhaps? Maybe look up all the sights you want to see? I have another option to add to your list — seeing if you can rent a Slingshot.

Polaris has been using its experience in building ATVs and motorcycles to build the Slingshot for some time now. The Slingshot is aimed at blurring the line between a motorcycle and a car — offering three wheels, two seats, and…not much else.

That’s not a bad thing though. The minimalism of the Slingshot is kind of the point, allowing you to feel close to the road and feel the wind as it rushes past. For 2023, Polaris is bringing a number of improvements to the Slingshot line, and the company flew me out to Austin to check out what’s new.

As mentioned, Polaris is bringing a number of improvements to the Slingshot series for 2023 — but rest assured that the overall experience of driving a Slingshot is pretty much the same.

First up are the aesthetic improvements, and they basically boil down to new colorways. Minor, to be sure, but having seen them in person the new colors do indeed look pretty great. Included in the new options are Jet Black, on the Slingshot S with Technology, Cobalt Blue on the SL, and Red Shadow on the SLR.

There are updates that aren’t aesthetic though. For example, the cars offer a new enhanced infotainment system option, which adds CarPlay support, and Bluetooth support — so you’ll be able to better access the music and information on your phone.

Other upgrades include heated and cooled seats, new premium Brembo brakes, and more.

For many, the upgrades to the lineup won’t matter. Some people buy Slingshots as an extra toy to have in the garage. But many people instead rent one — as a way to see a new city, or simple have a bit of fun in an interview.

It makes sense. They are fun.

As mentioned, I was able to test drive the new cars around Austin over two afternoons, and absolutely loved the experience. The addition of things like CarPlay helps ensure that it’s easy to get from sight to sight, which is always handy.

But when you’re driving a Slingshot, accessing CarPlay is an afterthought. The open-air, close-to-the-road drive, and loud engine, is thrilling in a way that you won’t get from other vehicles. The car is loud like a motorcycle and looks like nothing else on the road, so you’ll definitely turn heads as you drive — and that’s part of the appeal. If you get a Slingshot, expect people to take photos of you.

So should you buy a Slingshot for yourself? Well, if you’re really into toys like this perhaps — but I think it really serves as a great rental option for those who want to explore a new city on their own in style.