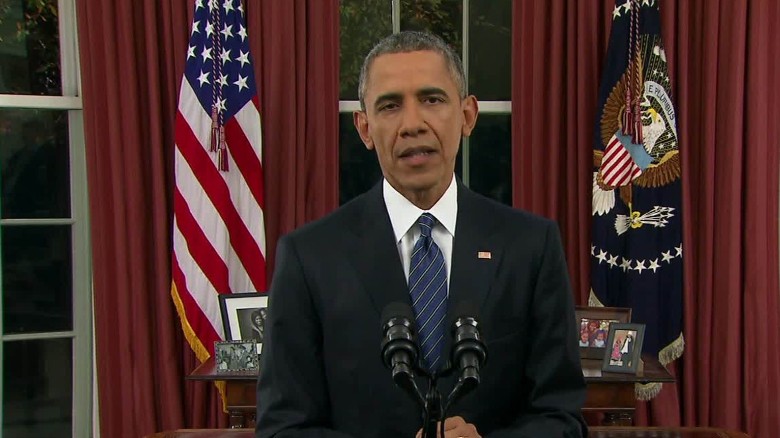 President Barack Obama all but called out encryption in a 15-minute Address to the Nation speech on Sunday night. The President touched on various subjects related to the recent terrorist attacks, explaining what the U.S. is doing to prevent similar tragedies in the future. Part of the country’s strategy against ISIS involves the ability of intelligence agencies to spy on potential suspects, though Obama didn’t explicitly mention encryption in his speech. Similarly, he did not call out any specific tech companies that currently encrypt their software or online services.

“And that’s why I will urge high-tech and law enforcement leaders to make it harder for terrorists to use technology to escape from justice,” is the sentence used in Obama’s speech to end a paragraph offering conclusions related to America’s strategy to fight ISIS. That’s everything the President had to say about the involvement of tech companies in helping out intelligence agencies. But Obama did make several references to how online services might help terrorism.

He said there’s no evidence linking the San Bernardino shooters to ISIS, but that the attack still constitutes a terrorist threat to regular citizens. “And as groups like ISIL grew stronger amidst the chaos of war in Iraq and then Syria, and as the Internet erases the distance between countries, we see growing efforts by terrorists to poison the minds of people like the Boston Marathon bombers and the San Bernardino killers,” Obama said early in his address, making it the first mention of the online war against radicalization.

“[We] are cooperating with Muslim-majority countries – and with our Muslim communities here at home – to counter the vicious ideology that ISIL promotes online,” he said while presenting the various actions the U.S. government has taken in the aftermath of the Paris attacks.

Without providing any specifics regarding the plots thwarted by law enforcement agencies, Obama said that “intelligence and law enforcement agencies have disrupted countless plots here and overseas, and worked around the clock to keep us safe.” It’s not clear how or if any of these threats were stopped thanks to the amount of information intelligence agencies had collected online over the past years, before encryption became the norm for Internet services.

Obama also acknowledged that spies might not be able to stop all imminent attacks no matter how good their intel, and he called for better gun control measures.

“We also need to make it harder for people to buy powerful assault weapons like the ones that were used in San Bernardino,” the President said. “I know there are some who reject any gun safety measures. But the fact is that our intelligence and law enforcement agencies – no matter how effective they are – cannot identify every would-be mass shooter, whether that individual is motivated by ISIL or some other hateful ideology. What we can do – and must do – is make it harder for them to kill.”

Obama’s entire speech is available on the White House’s website.

Presidential candidate Hillary Clinton echoed some of Obama’s remarks while Talking at the Brookings Institution’s Saban Forum on the Israeli-American relationship. Clinton did not mention softening encryption so that intelligence agencies can access protected communication, but she did call for tech companies to help combat ISIS.

She urged the “government and the high-tech community to confront [ISIS] together,” Re/code reports.

“They are using websites, social media, chat rooms and other platforms to celebrate beheadings, recruit future terrorists and call for attacks. We should work with host companies to shut them down,” Clinton said. The Democratic candidate referred to San Bernardino suspect Tashfeen Malik’s Facebook allegiance pledge to ISIS and ISIS leader al-Baghdadi before the massacre.