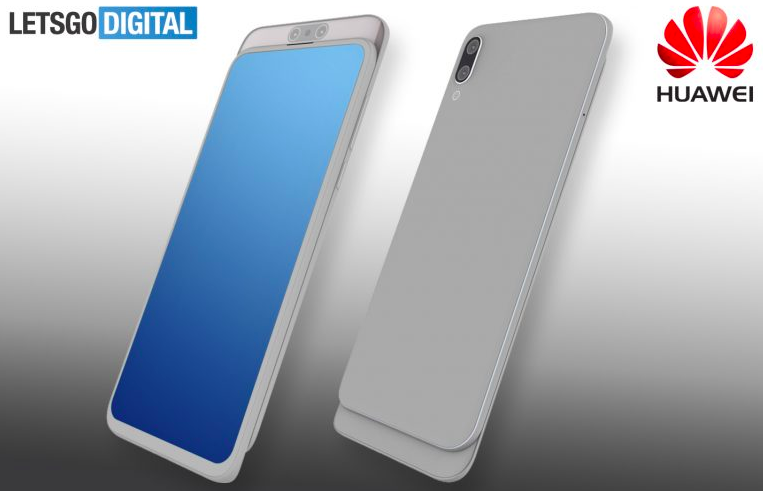 The push by smartphone makers to dedicate as much of the front of their handsets as possible to the actual display has made the inclusion of front-facing elements like the camera an increasingly tighter fit. Some devices, of course, have tried to solve that problem with the introduction of a notch to house the relevant components. Other device-makers like Huawei, meanwhile, are trying something different — a slide-out system that can reveal hidden elements like the selfie camera, so that they don’t have to take up precious real estate on the front.

A Huawei design patent published on Friday in the Global Design Database of the World Intellectual Property Office shows Huawei following along the lines of companies like Vivo, Oppo and Xiaomi in adding a retractable element into some of its smartphone plans. A color render prepared by Dutch tech blog LetsGoDigital, which can be seen at the top of this post, shows what is envisioned — when you extend the slide-out, for example, a dual selfie camera is revealed, with a flash in the middle.

The design of the handset itself includes rounded corners and essentially no borders. Per LetsGoDigital, there’s also room for two cameras and a flash on the back of the device, which apparently lacks a fingerprint scanner — suggesting that it may be included under the display or in the power button.

Given that this is a patent, there’s no indication yet of Huawei’s specific plans along these lines, including whether such a phone will ever be released at all. One assumption is that since these plans only show two cameras in the back, the phone envisioned here may well be positioned as a budget device, given the frequency with which increasingly complex camera systems are a centerpiece of premium smartphones.

As we said, though, Huawei is certainly not alone in thinking along these lines. Handsets like the Vivo NEX, Oppo Find X and Xiaomi Mi Mix 3, as well as Samsung’s Galaxy A90, take similar approaches in hiding their front cameras. About Oppo’s specifically, the folks at Ars Technica said the slide-out felt a little like those retro slider phones, just with a top that slides out instead of keyboard you slide out to start texting. At any rate, whether Huawei ever does something with this or not, it’s certainly interesting to see how smartphone makers are choosing to wrestle with the myriad design problems that result from the preference for phones to increasingly go bezel-free and to dedicate as much space as they can to large, beautiful screens.