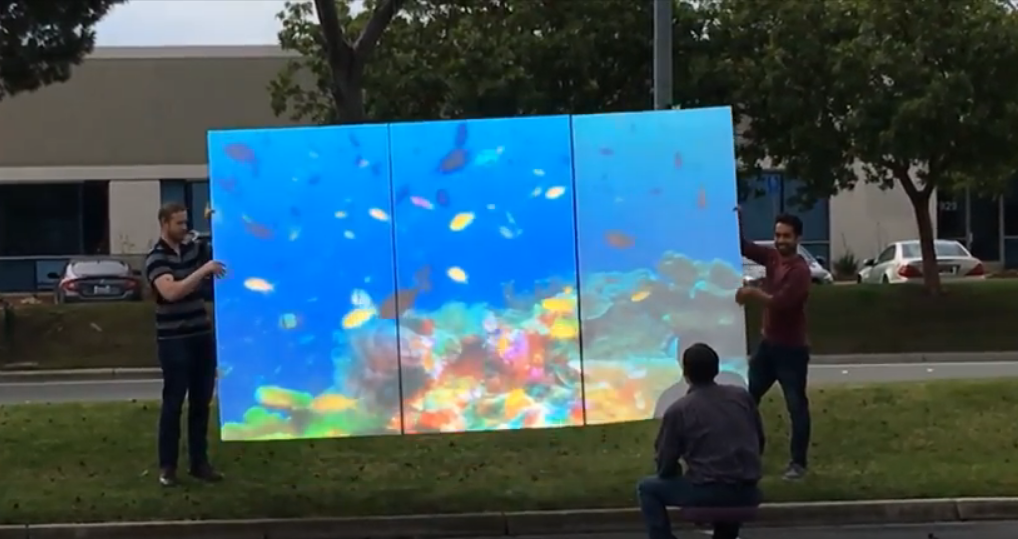 We see brand new projectors with exciting features and eye-popping price tags year in and year out, but rarely do we see a projector screen that attracts the same attention. And yet, that’s exactly what happened at CES 2018 this week as display startup MirraViz has been showing off its new MultiView system to members of the press.

Using technology that looks like magic, the MirraViz MultiView screen allows multiple viewers to see different content on the same display at the same time. In other words, I could be playing a game on the screen from one angle while a friend is watching a movie from another angle and a third person is watching TV from a third angle.

As MirraViz points out on its website, this kind of technology has been attempted by several other companies in the past, but it typically requires glasses or fixed viewing locations. MultiView, on the other hand, doesn’t require glasses and allows for dynamic viewing locations. Plus, screens can be up to 97 inches or even larger.

“With the MirraViz MultiView breakthrough capability users can enjoy in-person social gaming with friends and family on large area displays without split-screen and screen cheating,” the company explains. “Additionally, the systems can be used as a large screen size home theater system or for casual TV or movie viewing.”

As fascinating as this technology might sound, it’s not exactly accessible for the average user at the moment. In order to get the MultiView display up and running, users will need at least two projectors to transmit content on the screen. Furthermore, those projectors need to be of the high-end DLP variety — cheap pico projectors won’t work.

If you’re already set in terms of projectors, MirraViz screens start at $499 for 55 inches. The company will also sell its own bundles with projectors included, such as a home theater package for $2,000 and a gaming-centric package for $3,000 that features projectors as well as a high-end audio system and gaming chairs.