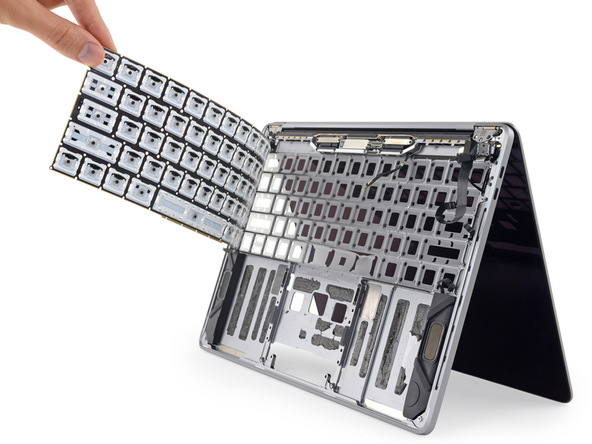 Last week, in true Apple style, the company released a series of updates to the MacBook Pro lineup. We got new processors, support for Hey Siri, and a keyboard that Apple described as “quieter.” The keyboard changes got the most attention, and not because of the supposed noise improvements. Apple’s recent butterfly keyboards have been plagued by a design flaw that can see dust get under the keyboard and into the mechanism, breaking the key and requiring a hugely expensive repair to fix.

Apple has acknowledged the issue, and created a repair program to fix any affected MacBooks free of charge. But it’s still refused to publicly acknowledge the fact that the new silicon membrane under the keyboard improves durability, even though its own support documentation says so. It’s classic Apple: Fix the problem, but be too proud to actually tell people you’ve made your product better, because you don’t want to admit there was ever a problem to begin with.

So, if we want to know how much the new silicon membrane under the keyboard improves durability, we’ll have to turn to the device-breakers extraordinaire at iFixit. The group has conducted a thorough teardown of the keyboard, and in a new blog post Thursday, they revealed the results of some torture testing.

We pumped this keyboard full of particulates to test our ingress-proofing theory. We started with a fine, powdered paint additive to add a bit of color and enable finer tracking (thanks for the tip, Dan!). Lo and behold, the dust is safely sequestered at the edges of the membrane, leaving the mechanism fairly sheltered. The holes in the membrane allow the keycap clips to pass through, but are covered by the cap itself, blocking dust ingress. The previous-gen butterfly keys are far less protected, and are almost immediately flooded with our glowing granules.

On the 2018 keyboard, with the addition of more particulate and some aggressive typing, the dust eventually penetrates under the sheltered clips, and gets on top of the switch—so the ingress-proofing isn’t foolproof just yet. Time will tell how long the barrier will hold up. Following the Mythbusters method of testing, we pushed the keyboard to failure with the higher-grit particulate we used last time: sand. And just like last time, a few poorly placed particles bring the mighty butterfly down to earth, never to click again.

So there you have it: the 2018 MacBook Pro keyboards are much more durable than the keyboards on previous models, but it still couldn’t be considered “rugged” or durable. In short, it’s a notebook keyboard: Using it in a dusty room won’t kill it, but don’t take it to the beach.