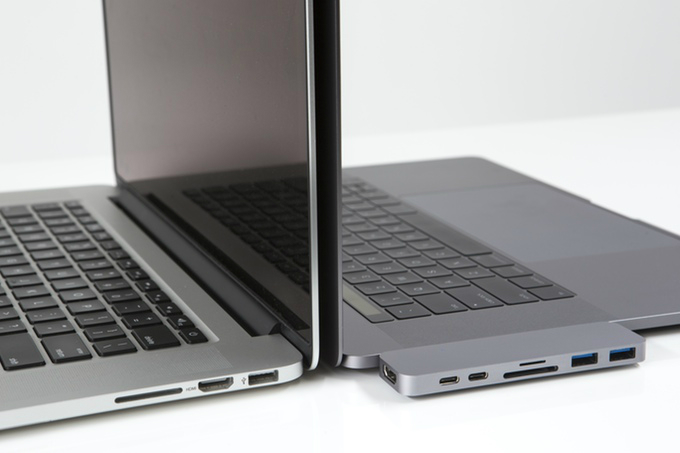 Apple’s MacBook Pro 2016 has a serious dongle issue, and the problem will not go away anytime soon. Sure, in the future, accessory makers will likely switch to the brand new USB-C port, but until then you’ll still have to buy all sorts of adapters for your machine. If you’re in need for such adapters and are looking for an all-in-one solution, then you absolutely need to look at this Kickstarter campaign that should save you from dongle hell.

The metal adapter in these images uses two USB-C ports to connect to the MacBook Pro, and offers a bunch of ports, including HDMI, two USB-C ports (one of them is Thunderbolt 3.0), two USB 3.1 ports, an SD slot, and a microSD slot. It can stay permanently docked to your MacBook, making it easier to take it with you at all times. The device matches the color of your MacBook and lines up perfectly with it, at least in theory.

What’s great about this campaign is that we’re not looking at a startup looking to try its hand at hardware manufacturing for the first time. HyperDrive, a company that already makes such dongles for the 12-inch MacBook and who’s been making external batteries for MacBooks for a few years, is behind the campaign.

This fact alone makes it a lot easier to trust this particular crowdfunding effort, which can’t always be said about every product concept that pops up on Kickstarter and Indiegogo.

Check out the video below to see this all-in-one dongle in action.