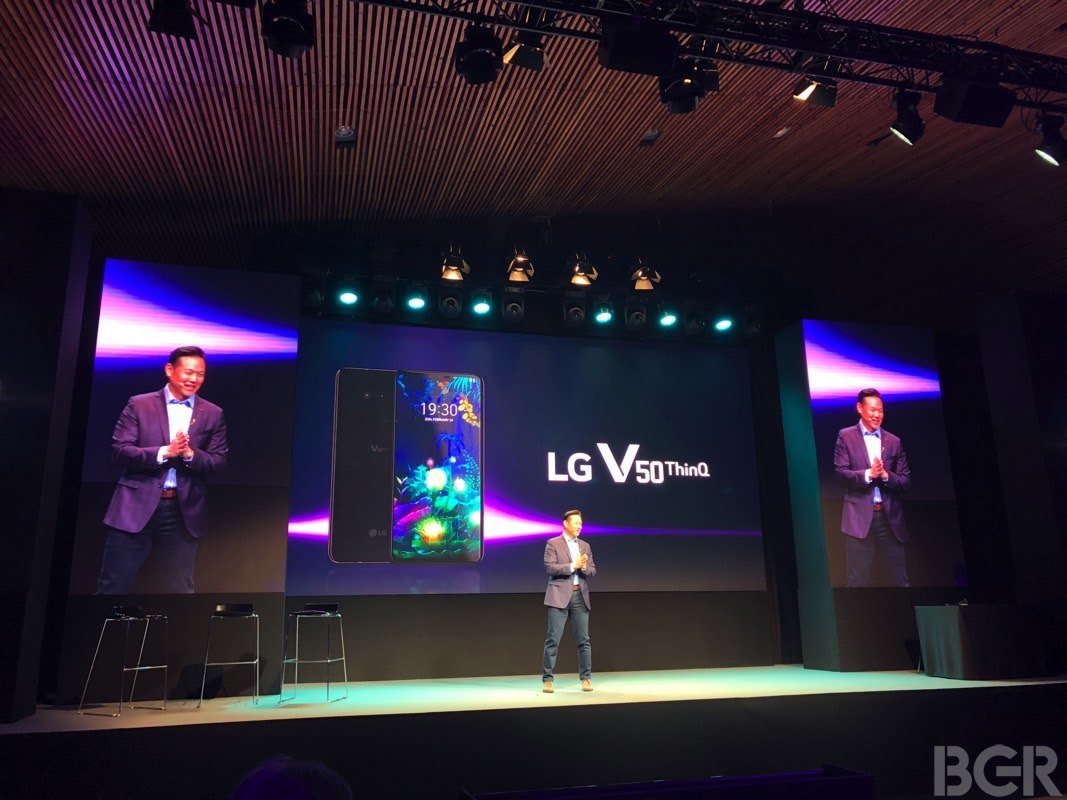 MWC 2019 hasn’t even officially started, but, like every year, all the major press events are scheduled for the Sunday that precedes the first day of the massive mobile trade show in Barcelona, Spain. Samsung is an exception this year, as the company decided to skip the usual Sunday event to get a few days of extra attention from the press. That’s why the Galaxy S10 versions and the Galaxy Fold launched earlier than expected.

While MWC hasn’t even started, it’s absolutely clear that foldable devices and 5G phones will be a significant thing this year. And LG made a phone that addresses both of these new trends.

The V50 ThinQ wouldn’t be the kind of device you’d expect LG to unveil at the show, but LG did things differently this year. In addition to the G8 ThinQ flagship that’s going to be a 4G phone, it also launched the V50 ThinQ in Barcelona, a phone that appeared in several leaks in the past few weeks.

That’s because LG doesn’t want to miss out on being among the first companies to announce a 5G phone, even if you can’t do much with a 5G handset right now because 5G coverage is minimal. Xiaomi sells a cheap 5G phone, Samsung has its 5G Galaxy S10+, and Huawei’s first 5G phone is the Mate X foldable phone that we saw earlier.

So how does the V50 ThinQ compete? The phone will feature a Snapdragon 855 processor paired with Qualcomm’s 5G chip to deliver a fast experience as well as 5G connectivity. A second screen, meanwhile, will offer users more space for consuming content and enhancing productivity. It’s not quite a foldable device, as LG said it’s not making foldable phones this year. So how does the magic happen? With the help of a case that makes the phone look like those ugly “foldable” phones from the past.

Inside, we’ll have a much bigger Vapor Chamber than the V40’s Heat Pipe, meant to dissipate heat more efficiently, as well as a generous 4,000 mAh battery, which puts the V50 in line with the Galaxy S10+ and the Mate 20 Pro.

The notch all-screen design for the main display is still there, complete with multi-camera support. On the back, meanwhile, the phone will have a triple-lens arrangement just like the V40 before it, as well as a rear-facing fingerprint sensor.

The V50 ThinQ will launch this spring on Sprint and other carriers that will soon have 5G networks up and running. Pricing details, however, have not been disclosed. That said, here are the full specs for the handset: