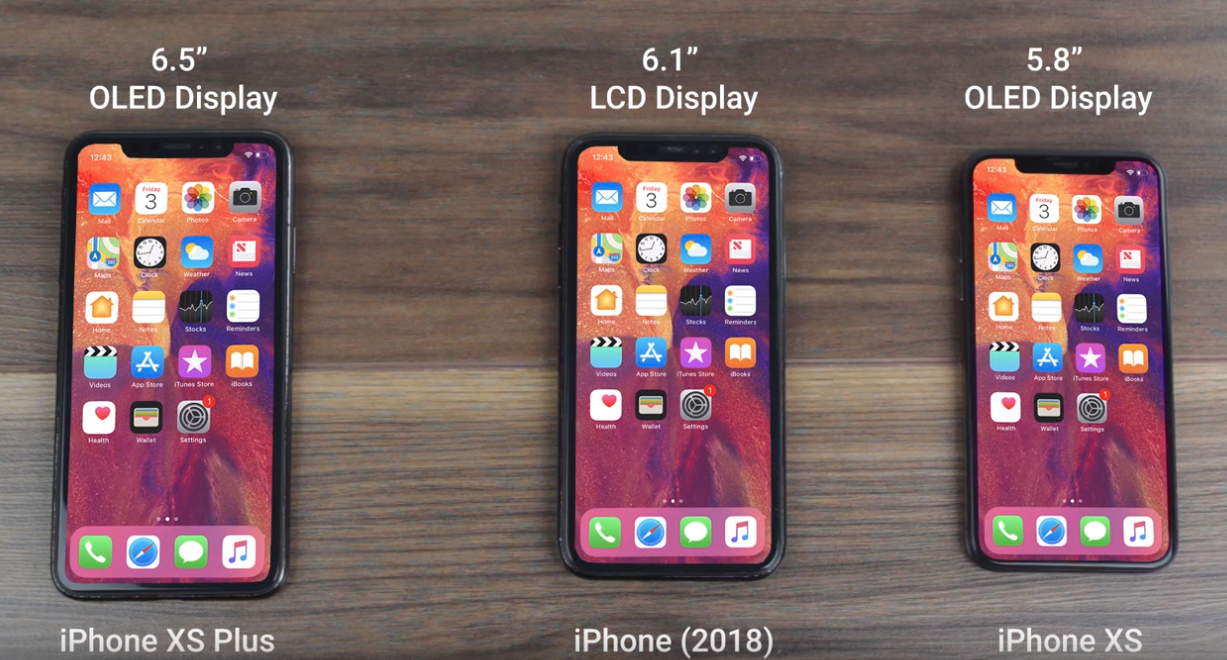 There’s just over a month to go until we’re expecting to see Apple debut three new iPhones, and the leaks are hitting fever pitch. Just yesterday, a leak showed us mockups of all three iPhone designs side-by-side, but today, we’re getting one better: A three-minute hands-on video featuring high-quality mockups next to a current-gen iPhone X, letting us get a true feel for the size and design of the 2018 iPhones.

Mobile Fun, a YouTube channel with a good track record, got their hands on high-quality dummy mockups of two of the three new 2018 iPhones. The two models they acquired purport to show the iPhone XS Plus, the 6.5″ OLED model that’s set to become the most expensive iPhone in the range, as well as the 6.1″ iPhone, which will have an LCD screen rather than OLED, and come in at a lower price. For the 2018 iPhone XS, Mobile Fun is using a current-gen iPhone X, since the iPhone XS that will replace it will likely have exactly the same design and dimensions.

It’s worth remembering that these are just mockups based on previous schematic and design leaks we’ve seen. Making dummy mockups, both for case manufacturers to work on designs as well as for us to fawn over, is surprisingly big business these days. The mockups themselves don’t represent a new source of information about the 2018 iPhone design; they’re just useful to look at for the sake of comparison.

With that in mind, take a look at the video, which is just three minutes long. The first thing that jumps out at me is how sad the cheaper device (reportedly just called the iPhone) looks next to this year’s iPhone X. The use of an LCD display rather than OLED might make it cheaper, but it also adds more bezel, which is a step backwards at a time when phone companies are looking to kill as much bezel as possible. Even though there’s only a 0.3-inch difference in screen size between the iPhone and iPhone XS, the phone looks much bigger and clunkier, almost as if it’s wrapped in a case.

The iPhone XS Plus, as you’d expect, just looks huge. 6.5-inches was a screen size that people were using for honest-to-goodness tablets just a few years ago, but given the popularity of the Note range, I can see this catching on. The only saving grace is that from the sounds of things (and the look of the mockups), the iPhone XS Plus won’t have any features that the iPhone XS doesn’t have. This hasn’t been the case in past years, as Apple reserved some features exclusively for the iPhone 6S and iPhone 7S. That was incredibly annoying for those of us that didn’t want a huge phone but wanted all the latest features, so I’m glad to see that the smallest new iPhone this year looks to be getting some love.