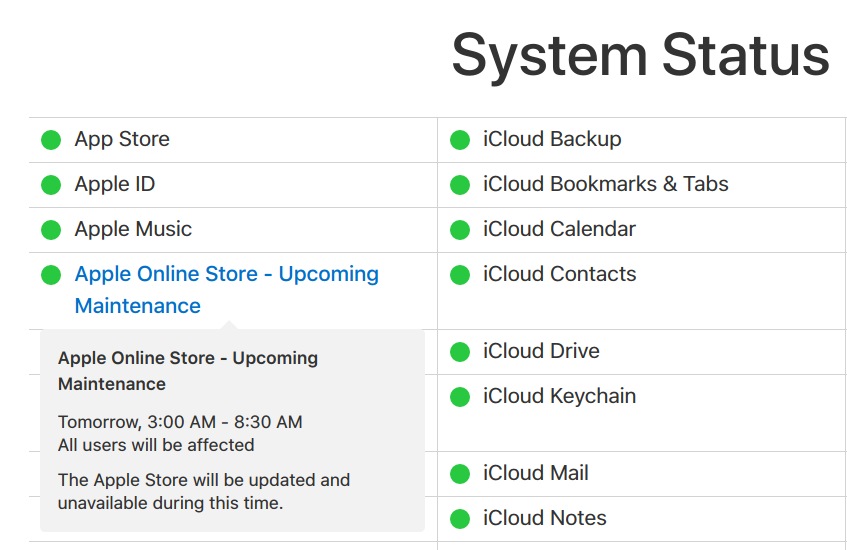 We’ve been hearing rumors swirling about some kind of Apple product launch this spring, but event invites are still nowhere to be seen. With time running out for a March event to happen, it’s increasingly possible that Apple could be planning to quietly release updates to some products with no event and minimal fanfare. And based on hints coming from Apple’s own website, it could happen tomorrow morning.

As MacRumors spotted, Apple’s system status page currently shows that the Apple Store will be down tomorrow morning from 3.00AM to 8.30AM. The Apple Store traditionally goes down before new products are announced; 8.30AM is also a common time for Apple to send out press releases. Combine that with the rumors that have been swirling about product updates, and it’s definitely time to be suspicious.

So, what’s Tim Cook & Co got cooking? The likeliest new product that wouldn’t merit a launch event would be a spec-bumped version of the iPhone SE. We’ve been hearing that Apple might be updating it to include a 128GB storage option, bringing it in line with other new iPhones. It’s also very possible that other minor components get an update, like moving to the second-generation Touch ID sensor or a newer camera module.

The iPhone SE was launched this time last year, so an update at this point would make sense, but changing the physical design and form factor wouldn’t. Moreover, with the launch of an iPhone 7S and iPhone 8 both expected in September, it wouldn’t make sense for Apple to release a splashy new design in spring, which would potentially cannibalize iPhone 8 sales in the fall.

But on the other hand, Samsung is launching its latest and greatest on March 29th, and releasing a new handset at the same time would be a classically trolly move from Apple.

Other good guesses for spec-bumped products would be updated iPads, which we were all half-expecting to see at an event this spring. It would be uncharacteristic for Apple to launch a brand-new iPad size (as had been rumored) without a launch event, but a spec bump and slimming-down of the current lineup would make sense.

There’s also the Mac line to consider. Although the MacBook Pro just got a once-in-a-generation overhaul, the iMac is due a minor update, and Intel’s recently-released Kaby Lake processors are yet to find their way inside.