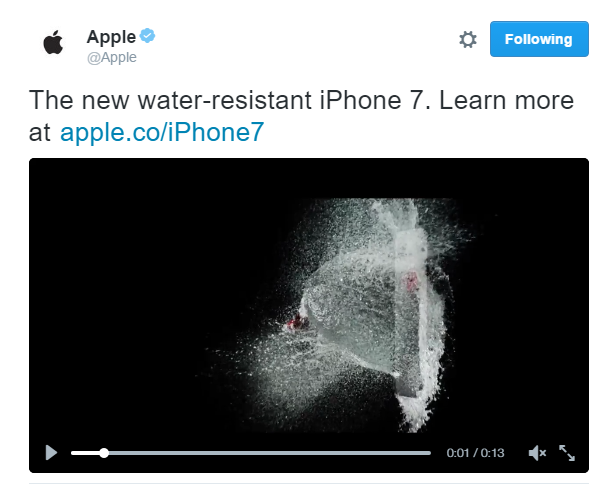 Apple’s event is still in progress, and right now we’re talking about the App Store and Mario coming to the iPhone. But Apple’s brand-new Twitter account just tweeted (and deleted) a short video of the new, “water-resistant” iPhone 7.

There are no more details yet, but water resistant implies a pretty low level of waterproofing. You can expect it to withstand a shower, or short immersion in a body of water, but it won’t be fully waterproof like the Samsung Galaxy S7 Active.

The iPhones have been becoming more waterproof with time. Tests conducted on the iPhone 6s showed a high level of water resistance, but Apple has never officially said that its devices were resistant to liquid damage. With the iPhone 7, it seems like that is all changing.

The leaked tweets also confirm a few new details: an all-black color, better battery life, and new cameras. None of these are a surprise, given the leaks we’ve seen in the last few weeks. What is a surprise is that such a large company managed to screw up quite so badly.