Under the direction of Jony Ive, Apple over the years has strived to make the iPhone increasingly thinner. This created something of a disconnect with users who shouted rather loudly that they’d be more than happy to put up with a thicker device if it resulted in improved battery life. In fact, countless surveys over the past few years made it overwhelmingly clear that improved battery life was the most desired feature among iPhone owners, ranking far above design features like thinness.

Nonetheless, Apple’s near-obsession with device thinness marched on unabated, prompting some to wonder if Apple had completely lost touch with its user base. With the iPhone 7, however, Apple finally delivered the drastic improvements to battery life that users had been demanding for years. But curiously, the iPhone 7’s battery life almost seems like a complete non-story as all anyone can seemingly talk about is the missing headphone jack or the curious design of Apple’s AirPods.

So if we may take a brief reprieve from the ongoing headphone jack controversy, let’s take a closer look at battery life on the iPhone 7.

As the chart below demonstrates, the battery life improvements with the iPhone 7 are substantial. All the more impressive is that Apple managed to increase battery life while not making the device itself even a millimeter thicker. Suffice it to say, there’s a lot to be happy about. 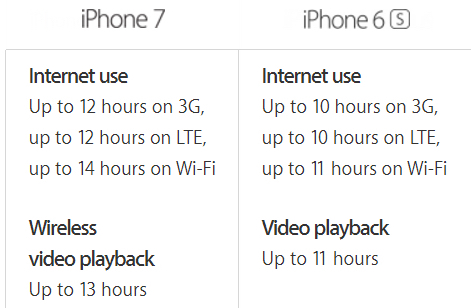 Isn’t this what iPhone users have been demanding for years on end?

3G and LTE browsing improved by a solid 20% while Wi-Fi browsing increased by an even more impressive 27%. And rounding things out, video playback increased by a respectable 2 hours. Interestingly, the iPhone 7 marks the first time that Apple managed to increase LTE browsing time on the iPhone since the release of iPhone 5.

With respect to the iPhone 7 Plus, users should be able to enjoy about 1 hour more of battery life relative to the iPhone 6 Plus.

And yet, in the midst of an unprecedented Galaxy Note 7 recall and stellar improvements to iPhone battery life and performance, all anyone can talk about is the removal of the 3.5mm headphone jack.

So it goes in the world of Apple.