Just a few short months ago, Apple’s next-generation iPhone 11 lineup was shaping up to be one of the most boring iPhone updates in recent history. It couldn’t be the most boring iPhone update, since there’s no way Apple will be able to top the iPhone XS in that department. Thankfully, a few new reports from well-placed sources over the past few weeks have painted a much more compelling picture of the iPhone 11. While the overall design of Apple’s upcoming new iPhone lineup will remain largely unchanged, we’ve seen more and more news of big upgrades lately. Most recently, the world’s top Apple insider reported that Apple’s iPhone 11 and iPhone 11 Max will both feature triple-lens rear cameras that pack all sorts of new tricks, while the iPhone 11R (or whatever Apple ends up calling it) will sport an upgraded dual-lens camera. On top of all that, Apple has big things planned for iOS 13 and some of the details surrounding the company’s upcoming new mobile software update have already leaked.

Long story short, 2019 is looking a bit brighter for Apple fans than it was a couple of months ago. iPhone owners who don’t plan to upgrade to a new phone will still have a pretty huge software update to look forward to in September (or in June, if they’re brave enough to install the early beta versions following WWDC 2019). Meanwhile, people who do upgrade will apparently get an updated design, plenty more power, and a massive camera upgrade that’s much-needed, considering how far Apple has fallen behind the likes of Google and Huawei in this crucial area. If you’re wondering what all that will look like when it comes together, a new leak that just hit the web this morning is just what the doctor ordered. The video in question shows Apple’s final iPhone 11 and iPhone 11 Max designs side by side, and it shows what they’ll look like in real life as opposed to just pictures.

Remember back in 2016 when Apple released the iPhone 7 and iPhone 7 Plus? They used the exact same designs as the iPhone 6s series that came before them, and the iPhone 6 series that came before that. In order to make up for that, Apple introduced some sleek new finishes, a bunch of new features, and an upgraded dual-lens camera on the larger iPhone 7 Plus. It worked quite will for the company — Apple sold a record 78.29 million iPhones in the holiday quarter following the iPhone 7’s release. That’s a record that still stands to this day.

It appears as though Apple’s 2019 iPhone lineup is going to follow the same pattern as far as design and features are concerned. From afar, the iPhone 11 will look just like the iPhone X that was released two years before it. The iPhone 7 from 2016 looked just like the iPhone 6 from 2014. But leaks have shown us that Apple is planning a huge upgrade for the iPhone 11’s camera, and reports from insiders suggest a few important design changes such as a new finish and new frosted glass on the back. 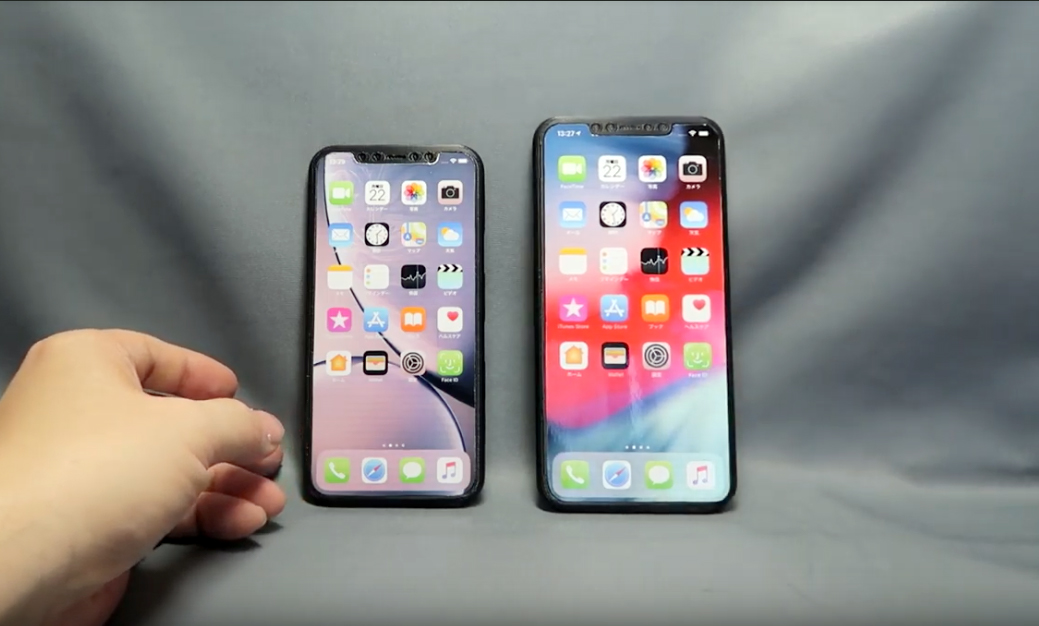 It will still be a while before we know exactly what Apple has in store for us in 2019, but a new leak gives us a very good idea of what to expect. Using schematics that had previously leaked from a factory set to manufacture Apple’s upcoming iPhone 11 series phones, 3D printed dummy models of the upcoming iPhone 11 and iPhone 11 Max have made their way to Alibaba. Japanese Apple news blog Mac Otakara recently purchased a pair, and on Thursday the blog posted a video of them in action.

Again, these are not actually Apple’s upcoming new iPhones. That said, they are models that were built to scale using schematics that are believed to be accurate, so they’re almost certainly a very good representation of what we can expect from the iPhone 11 and iPhone 11 Max when they’re announced in September. The video showing the mockups is embedded below.