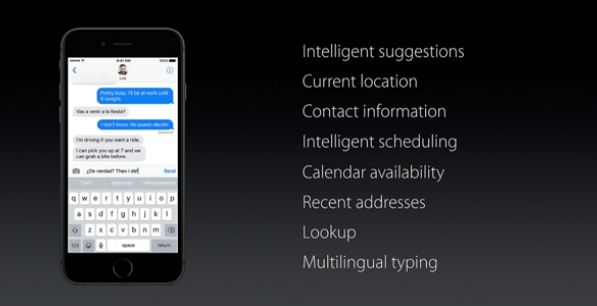 One of the main iOS 10 features concerns Siri, Apple’s virtual assistant that’s now getting smarter than ever with the help of developers.

Just like Siri for Mac, which was just announced, it’s no surprise that Apple is finally opening Siri to developers. That means you’ll be able to use your voice in iOS 10 to command various features inside third party apps.

If you’re used to sending messages or emails using Apple’s default apps in iOS 10 with Siri, you’ll quickly adapt to doing it using alternative apps that might be even more popular than Apple’s. For example, you’ll be able to tell Siri to “Send a WeChat to Nancy,” and the assistant will invoke the right application to do the job.

Siri will get messaging support for a large variety of popular messaging apps, including WeChat, WhatsApp, and Slack, to name just a few. It’s likely that, as long as developers support Siri, the digital assistant can be quickly baked into any app using the proper Siri SDK tools. VoIP apps including Spark, Skype, and Vonage will also get Siri support.

Siri will work with Uber, Lyft, and Didi, which means you’ll be able to get a ride with Siri without even reaching for the phone. Just say “Hey Siri” and then get your car.

The voice-based assistant will work inside photo apps as well, and it will be able to search for photos with ease inside Shutterfly, Pinterest, and others.

Siri will work with fitness apps, including Runtastic and RunKeeper, and it will let you pay for stuff with your voice inside Square, and other payment apps.

If that’s not enough, Siri for iOS 10 will work with CarPlay as well, giving you even more control of your digital life while you’re behind the wheel.

In case you were wondering, the new Siri is also getting advanced intelligence, meaning that not only is Siri getting smarter because it can use other apps, but also because Apple is putting its deep learning tools to good use.

A new technology called LSTM, which is short for “long short term memory,important” will let Siri offer you a bunch of interesting features, including intelligent suggestions and scheduling, a smart way to prefill relevant contact information and calendar events, support for a multilingual keyboard experience.

By far, this is significant Siri update in years, which should help Apple put up a better fight against Amazon and Google.

Apple also explained that all the smart Siri features, as well as all the other smart AI-based features of iOS 10 (such as the photo management experience), will respect the user’s privacy. Everything happens on the iPhone, and Apple will probably not have any access to the data is collecting – while the company stressed on the fact that your privacy is protected, it didn’t explain in great detail how its newly unveiled AI will work.