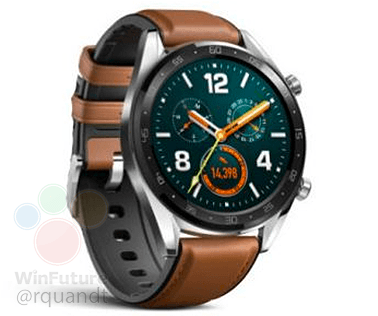 Huawei CEO Richard Yu said in a recent interview the company isn’t done with smartwatches, not by a long shot, and today we’re getting a taste of what the company has next in store along those lines.

Via WinFuture, we have a new image of the Huawei Watch GT that’s leaked, along with fresh details about the wearable that’s launching with the Mate 20 later this month.

Per 9to5Google, that image represents our first look at the Huawei Watch GT “Classic” or “Fashion.” “Apparently, a second variant of the watch is set to arrive as the Huawei Watch GT Sport, differentiated by different colors used on the bezel and the color of the band.

That report goes on to note the watch will offer power-saving modes that supposedly give you up to two solid weeks of battery life on a single charge. It’s speculated that Huawei may use a new chipset in order to be able to do that, possibly the Qualcomm Snapdragon Wear 3100. But we don’t yet know that, or whether the watch will definitely run Wear OS as assumed.

9to5Google reports it’s also not yet clear if the watch will sport a heart-rate monitor, but GPS and NFC are “apparently confirmed.” The watch also uses a 420mAh battery and has a “swimproof” water resistance rating.

“We want to make bigger improvements and make the experience much better than today,” Yu told Digital Trends in August. “That’s my target. We want to make the smartwatch more useful, more intimate, more functional, and with much longer battery life.”

Huawei last released a smartwatch in April 2017, the Huawei Watch 2, the site goes on to note. “Today we have two days battery life,” Yu continued. “I hope to have one running for a week. We want much better performance, and more usability.”