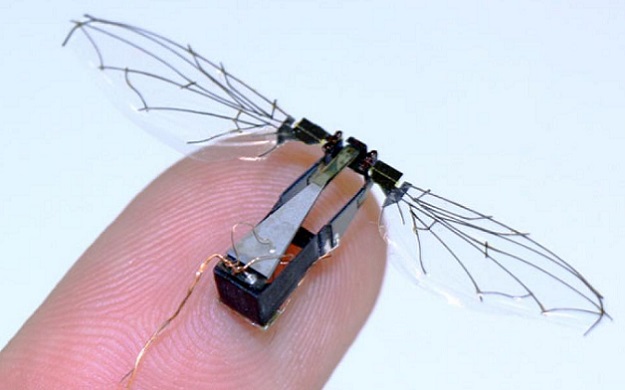 Remember the MIT’s RoboBee? The initiative kicked off a couple of years ago, aiming to fix a major problem that we currently have: the bee population is slowly dying, and without bees, we’re pretty much doomed. Last fall we learned that researchers from Harvard created an insect-size robot that can both fly and swim. And now we hear that MIT and Harvard researchers have partnered up to create a RoboBee that can perch.

Why is that an important feature? Well, just like with other drones, there’s one problem with the RoboBee: it can only fly as long as it has enough energy to do so. By being able to attach itself to surfaces, the RoboBee can conserve energy in between flights.

The perching RoboBee uses static electricity to attach itself to surfaces, UPI reports, and can detach to continue the flight to the next task.

The RoboBee is no bigger than a quarter, but it can fly around by itself. A simple jolt of static electricity emitted through a tiny foam patch on its head lets it glue itself to plants or ceilings.

This technology could one day be used on different kind of drones, the ones involved in search and rescue operations. And even in intelligence gathering operations, considering that such tiny robots do have external cameras and sensors that help it fly around.

“Perching onto structures can save energy and maintain a high, stable observation or resting position,” researcher Mirko Kovac wrote, saying that the next step is to come up with ways of recharging the battery while the RoboBee rests – like using solar cells to collect energy.

A video showing RoboBee’s new capability follows below, with more details about the project available in the journal Science.