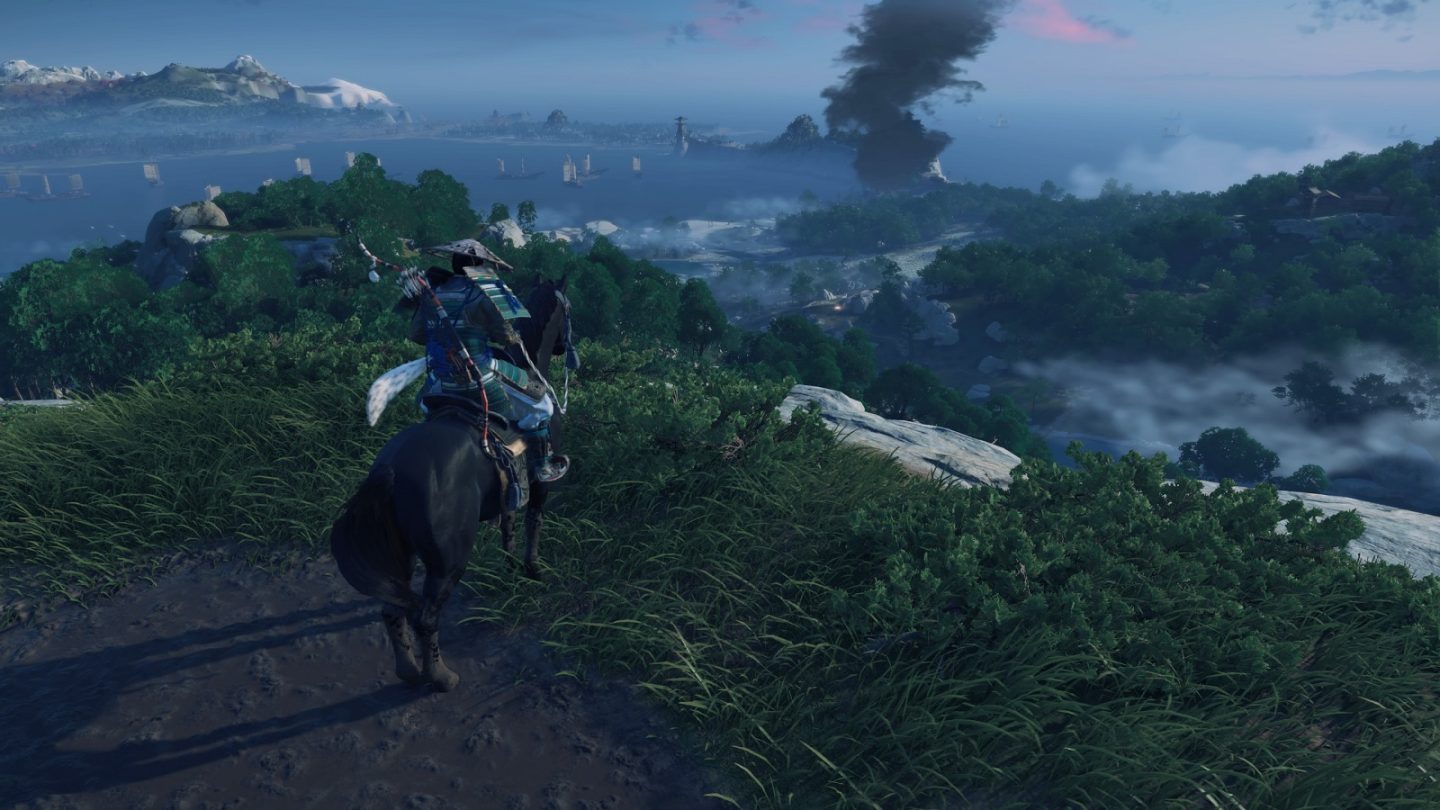 Ghost of Tsushima is only the second full-length title developed by Sucker Punch Productions for the PlayStation 4, but it’s also the last major first-party exclusive made for the console ahead of the launch of the PlayStation 5. There’s obviously no way the team at Sucker Punch knew this would be the case when development on the game began, but it’s a fitting send-off for one of the most successful video game consoles of all time.

Sucker Punch is best known for Sly Cooper — a franchise about a thieving raccoon with a heart of gold — and Infamous — an open-world action-adventure series with a superpowered protagonist. Ghost of Tsushima draws from both, but as fun as those games are to play, the reason that Sucker Punch has been one of my favorite developers for nearly two decades is because their storytelling chops match their game design strengths. And Ghost of Tsushima features, without question, the most serious and dramatic story the studio has ever told.

Narratively, Ghost of Tsushima wears its influences on its sleeve. When you load up the game for the very first time, you are given the option to turn on Kurosawa mode, which desaturates the visuals and gives the game the look of an Akira Kurosawa film from the 1950s. Jin Sakai, the samurai protagonist and presumptive savior of Tsushima, feels like he was ripped straight from the big screen as well, tasked with fighting back against the Mongol horde that had taken over the island by rallying its denizens and becoming their beacon of hope.

Khotun Khan’s army of dangerous Mongols is just one of many obstacles Jin will have to overcome, as his uncle, Lord Shimura, is rooted in tradition and refuses to watch Jin drift from the guiding principles of the samurai. Meanwhile, the other samurai clans, decimated by the Khan, need Jin’s help as they seek justice of their own. Eventually, all of the disparate stories and characters collide, and the impacts of the decisions these characters make when they are pushed to their limits had me fully invested by the time I reached the end of the campaign.

Mechanically, it’s hard not to compare Ghost of Tsushima to its contemporaries, but two influences stand out. With the Assassin’s Creed series, Ubisoft has refined the open-world gameplay loop down to a science, placing landmarks and activities and collectibles in every corner of its virtual playgrounds, nearly to the point of oversaturation. In fact, some would argue that the studio took this design past its logical conclusion with Assassin’s Creed Odyssey, which had enough side quests and optional content to keep a player occupied for quite literally hundreds of hours.

Ghost of Tsushima borrows heavily from this design template, with villages, farms, and camps scattered across the map, waiting for you to slay all of the Mongols and invite displaced citizens back in to take up residence once again. Far Cry, another Ubisoft series, has become synonymous with this style of objective.

When you aren’t driving Mongols out of occupied settlements, there are a number of diversions to take part in, from slicing bamboo to increase your resolve (which is a replenishable bar you can use to heal Jin or to perform especially powerful attacks), taking advantage of Jin’s platforming skills at Shinto Shrines to acquire new charms that can boost your abilities, or following foxes to their dens to increase the number of charms you can equip.

But you’ll spend the bulk of your time on Jin’s Journey (the main story) and the Tales of Tsushima, which are optional missions that introduce you to the most important secondary characters on the island and feature the most valuable rewards. For the most part, these missions are exceptionally well-crafted, and even after completing the main story, I’ve been going back to wrap up every loose end to see how those tales play out.

Most importantly, this is a world you will want to explore. Hopefully, the screenshots I’ve included in this review do the visuals of the game justice, because I can’t count the number of times I just stopped to take in the scenery. If there was no combat and no dialog in this game, I think I still could have spent a dozen hours exploring every valley, river, hillside, and forest just to watch the leaves fall and the sunset. It’s really, really pretty.

Where Ghost of Tsushima separates itself is in its combat system. Jin Sakai is a samurai, and the only weapon at his disposal in close quarters combat is his sword. Every enemy in the land of Tsushima is a threat, which makes even random encounters with roving bands of Mongols tense and exciting. Blocking, parrying, and dodging are all vital to dispatching enemies, as button-mashing will get you killed nearly every time, even against the weakest grunts.

My competence with the katana is still improving even now, long after the main story has concluded. Standard attacks can be blocked, attacks where the opponent’s weapon flashes blue have to be parried, and red attacks require you to dodge out of the way. Attempting to perfect this game of Simon Says is a challenge of its own, but then there are the stances that you learn throughout your journey, all of which are effective against different enemy types, and the fact that you are rarely battling just one foe at a time. It’s a chaotic dance that demands your attention.

I feel like a broken record, because I know I’ve said this in reviews of other games, but when it works, the experience of warding off half a dozen Mongols with a long series of perfect parries, well-timed dodges, and brutal executions, all while changing stances to effectively counter enemies with swords, with shields, and the brute with a cannon, can be exhilarating. That’s not always the case! Some games cannot achieve the same heights, even at their best.

But there were moments of temple-rubbing frustration as I battled my way through Tsushima, often due to the fact that while an animation of my character finishing off one enemy was ending, another enemy had initiated their attack, and I had no time to react before I was impaled. Jin is a powerful warrior, but even in the late stages of the game, having upgraded his armor and increased his health bar, he can’t take more than a few direct hits before going down, so every time I felt like an injury I sustained was out of my control, it left a bad taste in my mouth.

The Last of Us Part II and Ghost of Tsushima don’t have very much in common, but they both emphasize upgrades. I wrote about this in my review, but I’m not sure I’ve played a game that more intelligently balances its upgrade system than The Last of Us Part II, imbuing the game with a sense of progression without overloading the player with tons of decisions about how to spend the 25 different resources they’d been collecting to improve their arsenal.

By the final act of Ghost of Tsushima, Jin had more tools in his inventory than I knew what to do with. On one hand, I found a system that worked for me, but I felt encumbered by the sheer number of options.

You can approach nearly every combat scenario in the game head on, pressing a button to call out to the opposing forces and face them honorably. But stealth also plays a major role in the game, and utilizing Jin’s growing arsenal of tools and abilities to silently remove enemies from the battlefield was how I preferred to progress when it was a viable tactic. There are dozens of techniques for Jin to learn as his legend grows, and I spent most of my technique points in the Ghost skill tree, allowing Jin to assassinate multiple enemies at once, move faster while crouched down sneaking, and momentarily slow down time when he aimed his bow. Had I preferred a more aggressive playstyle, I would have unlocked different techniques, focusing on deflection and evasion in the Samurai tree.

Oddly enough, in many ways, Ghost of Tsushima feels like the logical conclusion to this console generation. Brilliant storytelling, massive open worlds, challenging and engaging combat — these are the hallmarks of the biggest games of the last seven years, and while Ghost of Tsushima has its flaws, it successfully coalesces all of these elements into a stellar package that ends up feeling like a perfect send-off for the PS4 era.

Ghost of Tsushima launches exclusively for PS4 on July 17th, 2020.

Sony provided BGR with a copy of Ghost of Tsushima on PS4 for the purposes of this review.