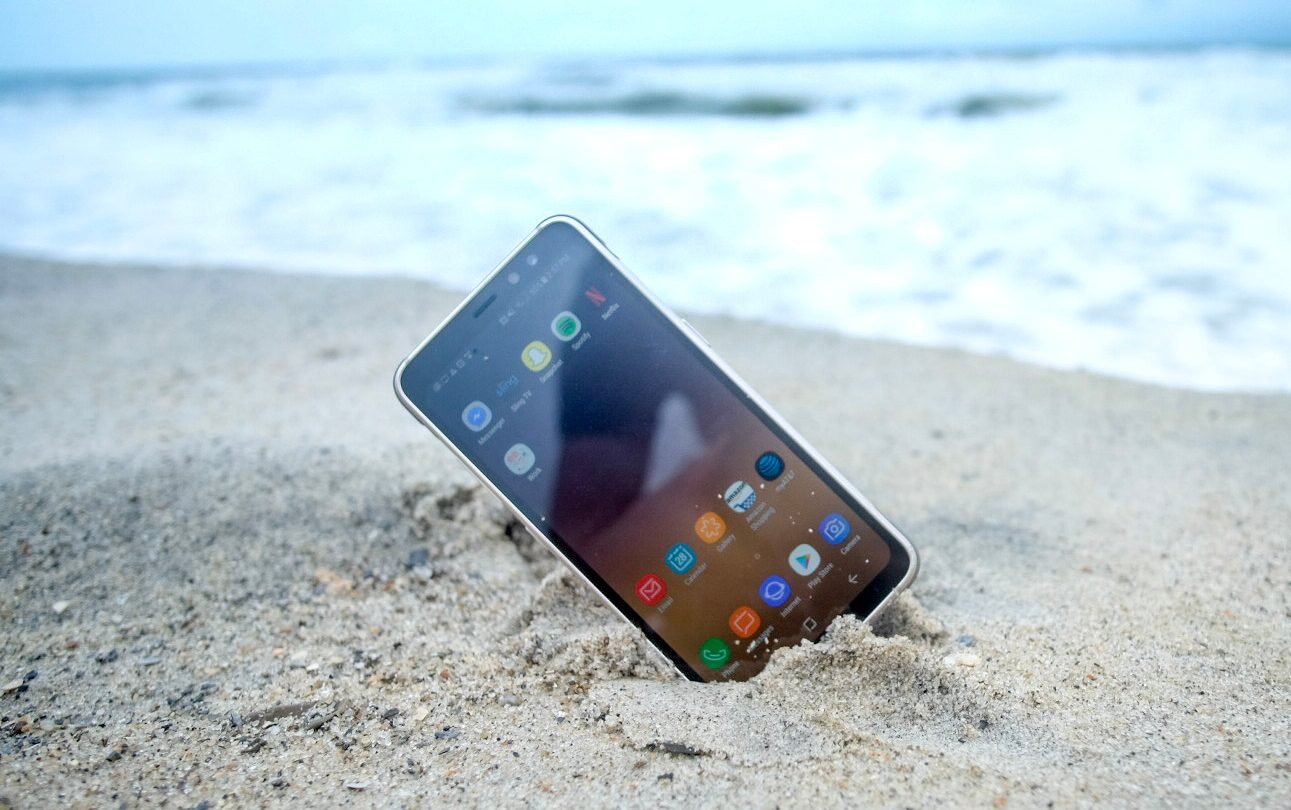 For the last five years, smartphone design has trended towards one inevitable conclusion: the perfect glass black rectangle. Screen is everything these days, with any other concern — physical buttons, practicality, or the ability to withstand everyday life — pushed to the side.

It’s good for most people, who take their phone from nightstand to car to desk back to nightstand every day. But if you’re a little rougher on your devices, you probably remember the days of the Nokia 3310 Brick Edition with a fondness that’s unusual for a lump of plastic. There is good news, however: in its quest to build the ultimate phone for everybody, I think Samsung’s accidentally created the perfect device for everyday use.

The Samsung Galaxy S8 Active isn’t a phone you’re going to hear a lot about this year. It’s overshadowed by the regular Galaxy S8, the Galaxy Note 8, the Pixel 2, and the iPhone 8 — all of which are great devices! But the S8 Active takes everything great about this year’s phone and puts it into a phone that doesn’t have to be babied. 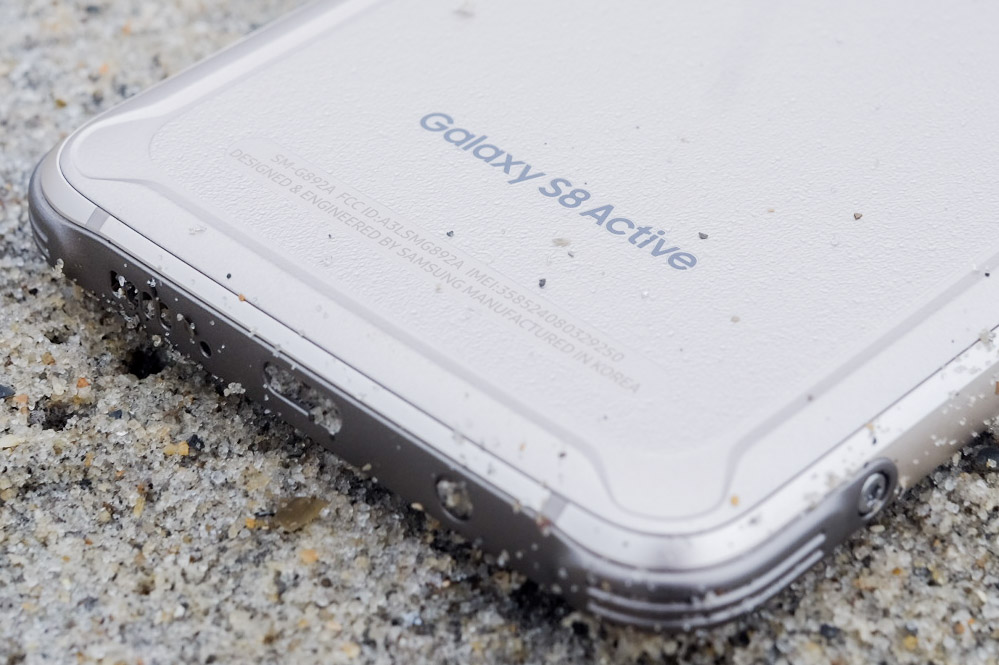 Let’s get this out of the way first: despite whatever marketing you might see, the Galaxy S8 Active isn’t a super-rugged phone solely for people who offroad every weekend. It doesn’t feel thick or heavy in the hand. The camo patterns and intense rubber overmolding that’ve long been staples of the Galaxy S Active line are gone.

In fact, the one thing that used to make “rugged” phones stand out — waterproofing — is now a standard feature on any flagship phone. All that’s really left is a rugged-enough construction to withstand minor drops without using a case, but one that’s sleek and non-obnoxious enough to take everywhere.

In almost every important consideration, the Galaxy S8 Active is the same as the regular S8. They share a processor, RAM, sensors, camera, fingerprint sensor, and the same Samsung-coated version of Android. In fact, once you get past the different body, there’s only two real differences of note: a battery that’s 33% bigger, and a screen without curved edges. 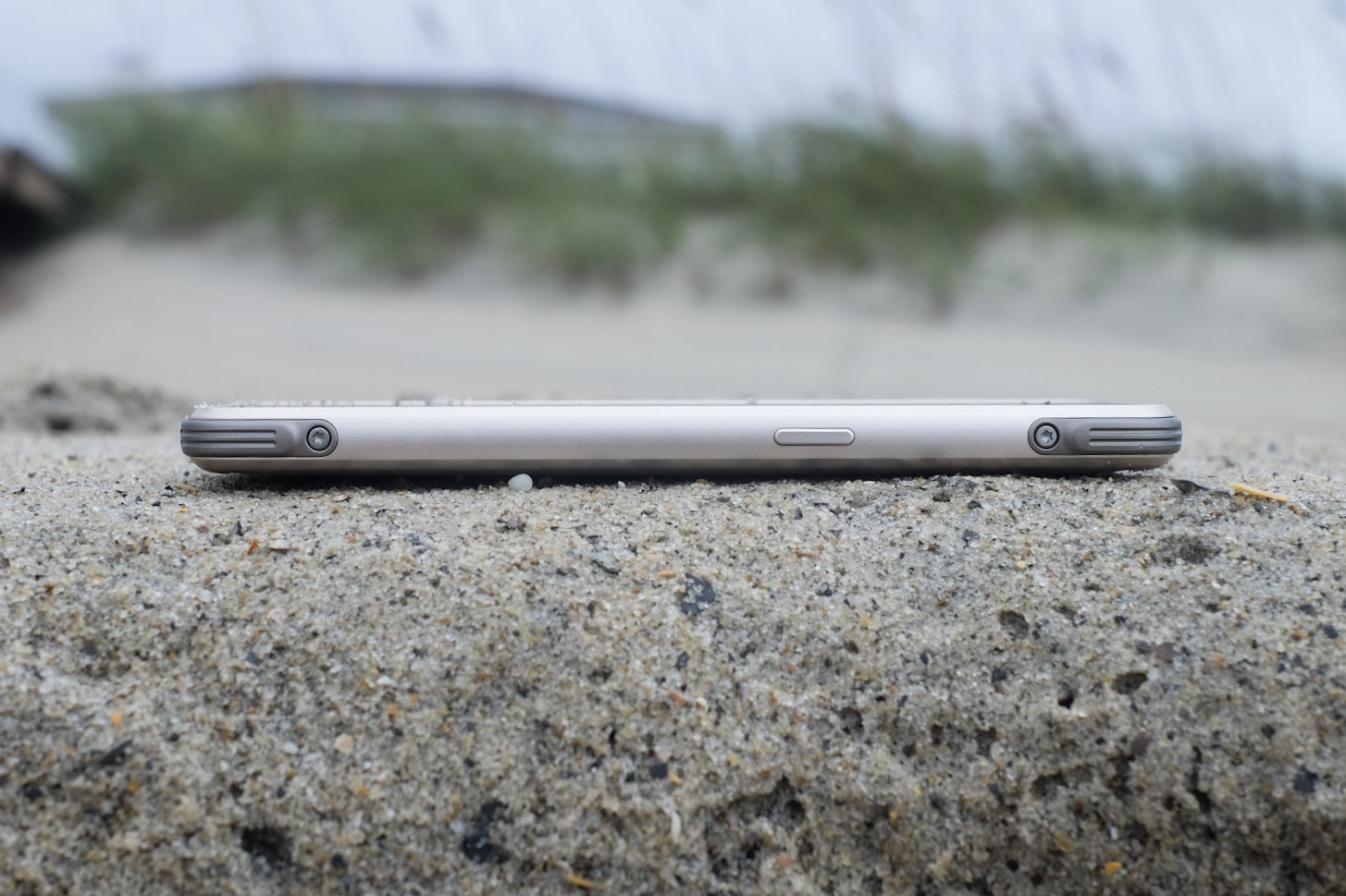 It’s a point that often gets overlooked, but the most exciting thing about this year’s crop of smartphones is how they manage to squeeze a big screen into an almost offensively small body. A 5.8-inch screen sounds like it’s too big for an everyday smartphone, but with the lack of excess around the edges, it’s just small enough to be usable.

I’d actually go as far as arguing that the physical changes made to the S8 Active make it a better phone to hold in your hand and use. The ratio of screen size to thickness feels a little off with the naked Galaxy S8 — it’s so big and so thin that I feel like I’m holding a fragile slate that’s going to fall and shatter.

Thanks to the 4,000mAh battery in the S8 Active (versus 3,000mAh in the regular S8), the Active is that little bit easier to hold in your hand. Neither phone is “difficult” to grasp — we’ve all got opposable thumbs! — but there’s a sense of reassurance that comes from holding the S8 Active. 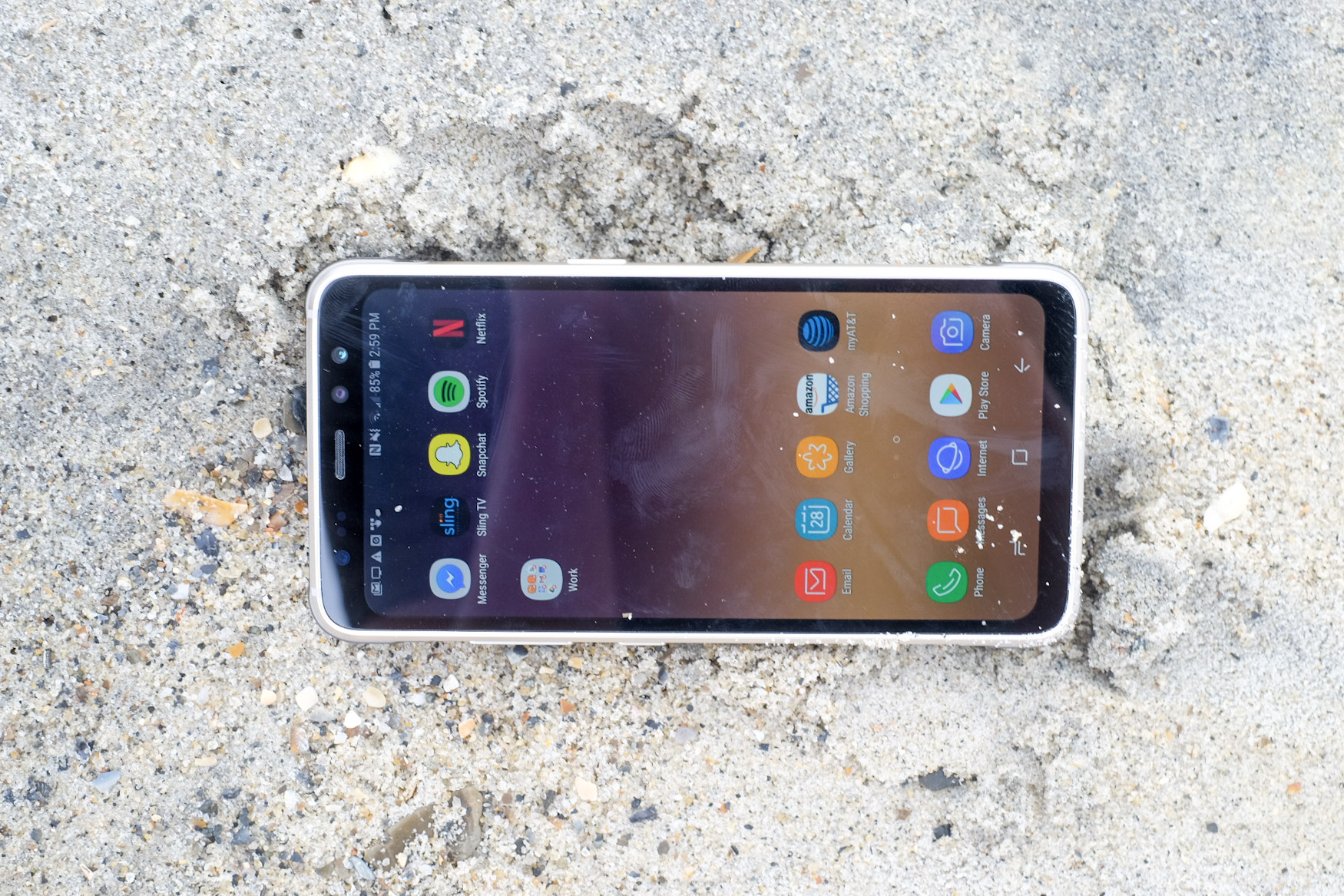 Of course, a big part of that is the mental side. When you’re holding the S8 Active, you can be very sure that a casual drop or slip isn’t going to be a multi-hundred-dollar mistake. The S8 Active is specced to withstand a drop from five feet onto any surface that isn’t a bed of nails, something I put to the test a few times. The S8 Active does just as well as you’d expect.

There is a penalty to the Activeness, though. I love the physical dimensions and solid construction, but whatever material was used for the back leaves a lot to be desired. It’s some kind of plastic, and it has an uncanny resemblance to the stuff they use to make seat-back tables on airplanes. It’s cheap, and running your fingernails over it doesn’t make you feel any better about spending $850 on a smartphone. I get that this needs to be a rugged phone, but something like the kevlar weave or rubberized backing used on Motorola’s phones would be better.

The S8 Active’s other selling point is the battery. 4,000mAh probably doesn’t mean much, so let me put that in context: I went 48 hours away from a wall charger, using the phone as a daily driver doing emails, GPS directions, Bluetooth streaming, and as much Twitter as my brain could take. On other phones like the iPhone 7 or Moto Z2 Force, I’d expect to get around 24 hours of battery life. It’s not some kind of software quirk: The S8 Active’s battery is just really big. Hopefully, this one won’t blow up. 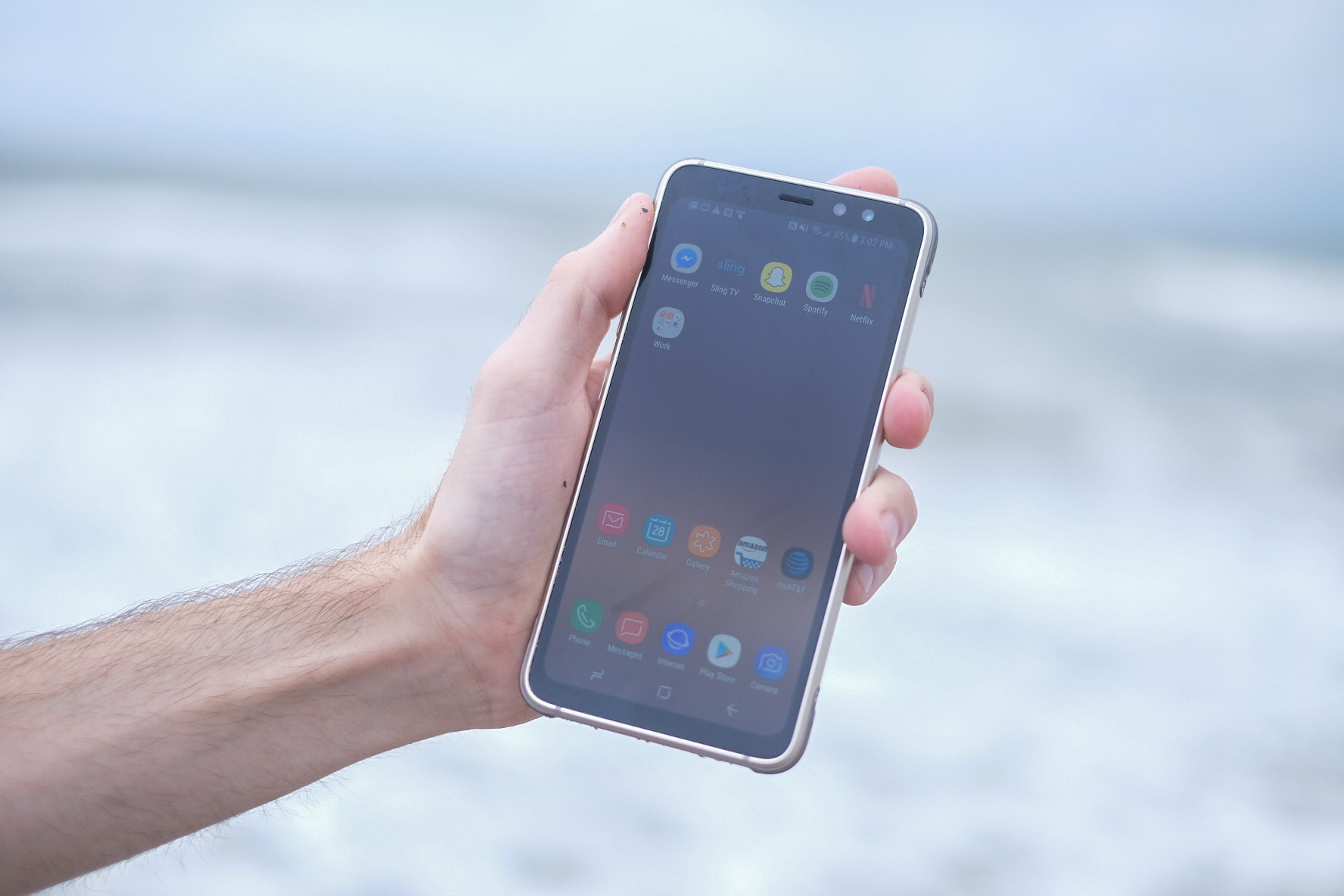 Now, there are some downsides to the S8 Active, and they’re the same ones you’re going to see on the regular S8. I’m still not a fan of some of Samsung’s software choices, like the constant nagging to use Samsung services and apps instead of Google stuff. The permanently-mapped Bixby button on the right-hand side is insanely aggrevating: Samsung couldn’t find space for a Home button, but it felt good about dedicating an entire hardware button to its own strange personal assistant?

The fingerprint sensor placement is still inexcusable. It’s right next to the camera, which means you’re going to constantly smudge the bejesus out of the lens. For someone with smaller hands like me, it’s also hard to reach. Rear-placed fingerprint sensor can work fantastically, they just need to be a bit lower.

Ultimately, I’d recommend the S8 Active in a heartbeat to any of my own friends looking for an Android phone to last them a while. If you’re the kind of person who likes buying the newest, prettiest, shiniest device every year, I’d look elsewhere. If your only condition is ruggedness, you’d almost be better off buying a regular Galaxy S8 for $600 and sinking the rest of your money into a serious case.

But if you’re after an everyday phone that’s going to last you years without screen shattering, water damage, or the occasional scratch of the back, get the S8 Active. It has everything you could possibly need in a top-end phone, it’s got enough power to keep up with the pack for at least two years, and it’s pleasant to use without a case. 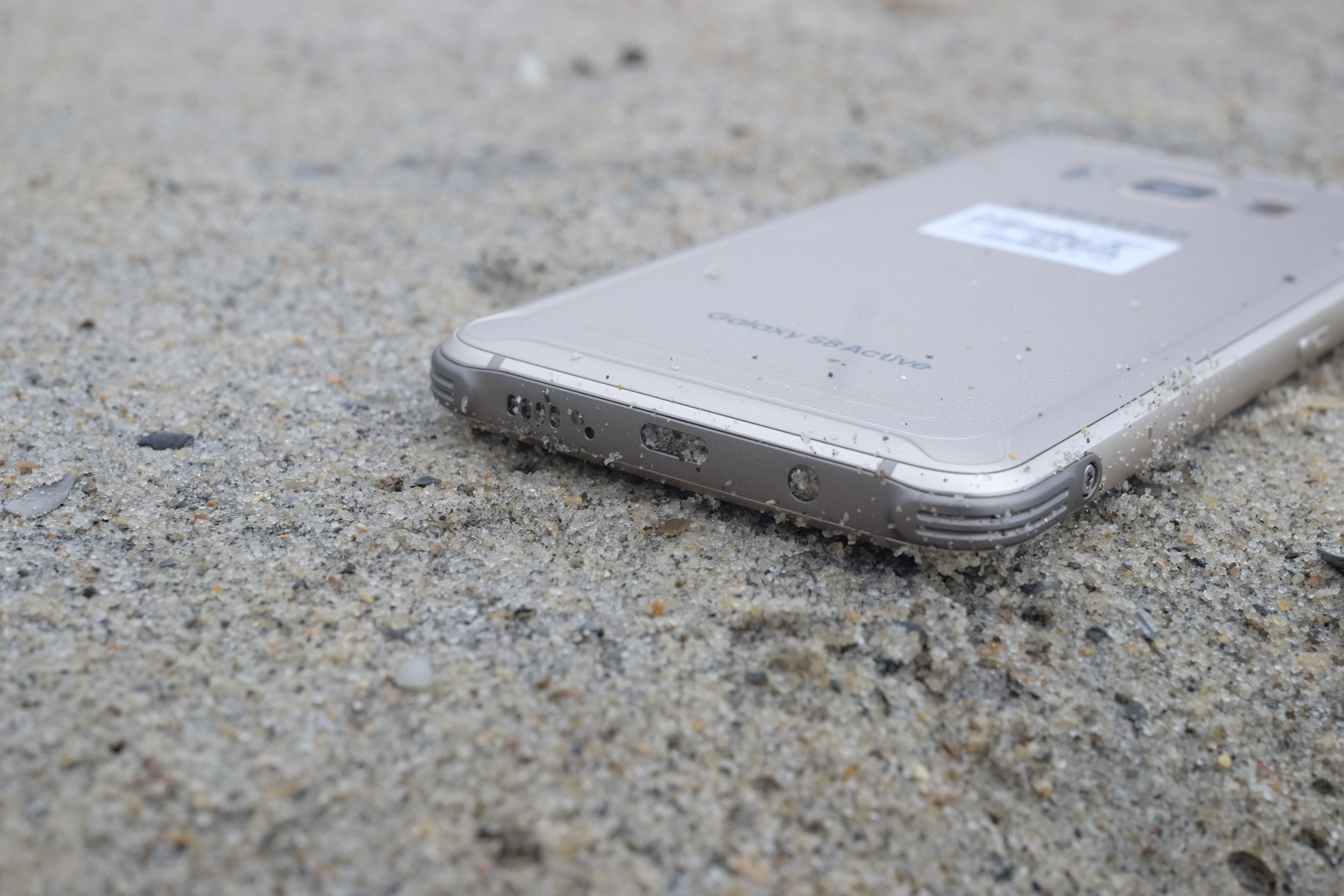 There’s only two real caveats, ultimately. $850 is a lot to spend on a phone, even accepting that Samsung just launched the even-more-expensive Galaxy Note 8. The Galaxy S8 is on sale right now for $575, and it’s justifying the $275 step-up is going to be difficult.

It’s also an AT&T exclusive right now, which could complicate things for anyone on a different network. Samsung has hinted that it might go on sale unlocked or on other carriers in the future, but it’s really just a matter of time until the Galaxy S9 is on the horizon.