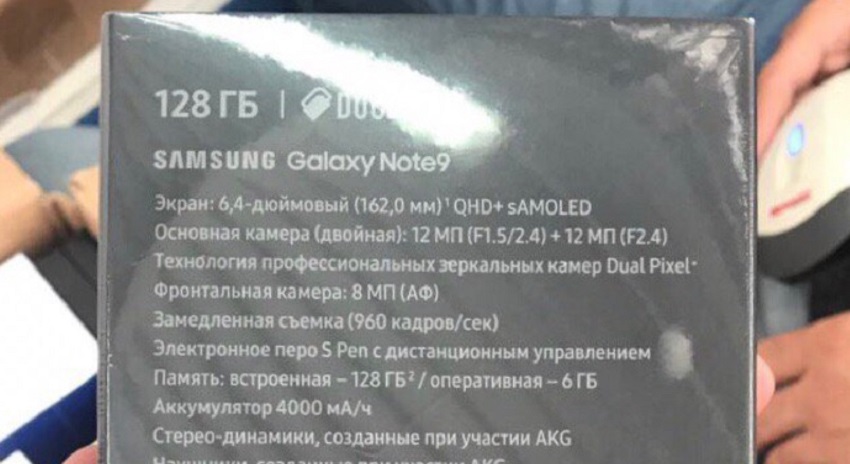 The last domino appears to have fallen in the endless Galaxy Note 9 leak saga, as a photo of what is purported to be the official retail box for the upcoming phone appeared online this week. Shared by Twitter user Dmitriy Ryabinin, the photo shows off the back of the box, which happens to feature a full list of specifications as well.

According to Ryabinin, the Galaxy Note 9 (which won’t be officially unveiled until Samsung’s Unpacked event in New York City on August 9th) is already in stock at some stores in Russia, which is how he was able to snag a photo of the box early. This might look suspect at first glance, but we’ve actually seen multiple similar leaks from Russia in recent weeks, including a hands-on review in late June and an accessory leak just days ago.

As for the retail box, it pretty much confirms what we thought we knew about the Galaxy Note 9. Samsung’s flagship will feature a 6.4-inch QHD+ sAMOLED display, a dual rear camera with two 12-megapixel lenses, an 8-megapixel front-facing camera, 4,000 mAh battery, IP68 dust and water protection, and an iris scanner.

The retail box for the 128GB model of the Note 9 (translated by SamMobile) also confirms that the S Pen will indeed double as a remote control, as several leaks suggested over the past few weeks. In addition to writing with the S Pen, the tool will also be equipped with Bluetooth functionality, which could potentially allow users to take photos or control media playback without actually having to directly touch their phones.

The Galaxy Note 9 has now been as spoiled as any phone in recent memory, but if there’s anything left to learn, we’ll hear about it at Samsung’s Unpacked event next week, which will be streaming live online.