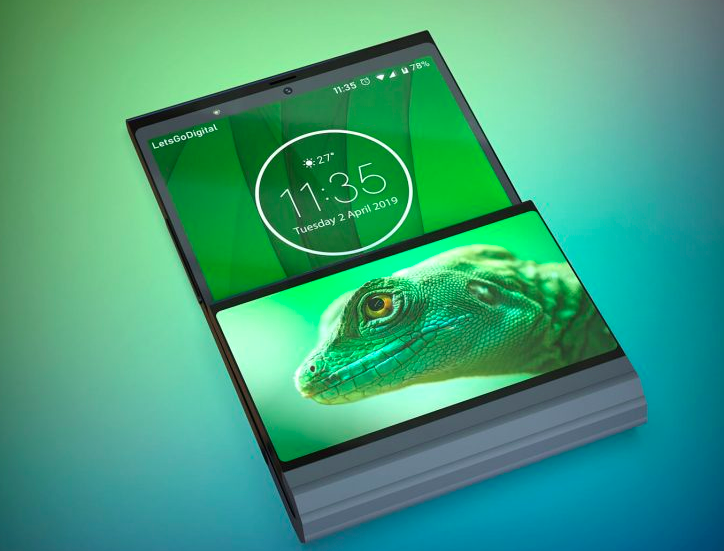 Foldable form factors are all the rage right now among smartphone manufacturers, with official introductions of such devices having already been seen from the likes of Samsung and Huawei, to cite just two examples. However, plenty of other manufacturers likewise have foldable handset designs of their own under consideration — with such designs having leaked from companies like Xiaomi and Oppo. And now it seems Lenovo is working on a design of its own, separate from the forthcoming Motorola RAZR expected this summer from Lenovo-owned subsidiary Motorola.

Based on a newly disclosed patent, it seems that Lenovo prefers a clamshell design that avoids the vertical book-like fold we’ve seen in models like the Samsung Galaxy Fold. Specifically, what Lenovo appears to be pondering design-wise is a clamshell design where the bottom portion of the phone curls up when closed, to reveal a smaller secondary display as you can see in the image at the top of this post.

That image and revelations about the design choices come via the patent spotted by Dutch tech news blog LetsGoDigital, which reports that the patent was filed last year with the World Intellectual Property Office and consists of several sketches depicting a foldable phone with a flexible hinge.

To be sure, this is not Lenovo’s first experimentation with a foldable design. The China-based company showed off a prototype back in 2016 of a foldable phone that unfolds to the size of a tablet, which also had a screen on the outside similar to the design of the Huawei Mate X. Also, Motorola will almost certainly release its RAZR foldable phone before this new Lenovo design sees the light of day, if it ever does.

It features minimal screen edges and a thin overall design, with room for the receiver within the upper portion of the screen and a selfie camera in the display border, as well. Also, as we said, there’s a secondary display that’s visible when the phone is folded closed, but as you can see from these images the LetsGoDigital team prepared based on the patent documentation, the fold is not in the middle of the phone. That makes the lower part of the phone shorter than the upper portion, a design touch that Lenovo is actually not alone in seeming to prefer.

Other manufacturers reportedly considering a clamshell foldable phone design that doesn’t fold precisely in the middle include ZTE and Oppo.