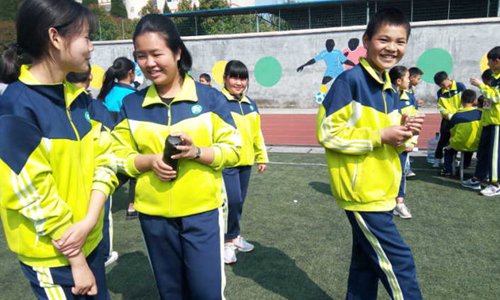 Chinese citizens get accustomed pretty early in life to living in a constant state of being tracked and surveilled by authorities. In what sounds a little like an episode of Black Mirror come to life, Chinese schools are now giving students school uniforms that come with two chips in the shoulders that track students’ locations.

It’s meant to keep a handle on when students are coming and going — you know, purely for attendance purposes, of course. As a complement to the chips, the schools also employ facial recognition at the entrances to make sure students are wearing the uniform that belongs to them.

If you decide to cut class while wearing the uniform, it triggers an alarm sound. That alarm will also sound if a student gives a friend their uniform to wear, and then that friend tries to walk through the entrance wearing the wrong uniform.

Reports the state-run newspaper The Global Times, “the uniforms might provoke privacy concerns as the system can locate students even in non-school hours.” But the paper then quotes Lin Zongwu, principal of No. 11 School of Renhuai in Guizhou Province, as saying (arguably, a little ominously) that “We choose not to check the accurate location of students after school.”

These uniforms are reportedly in use in 10 schools at the moment, and among their other features, they can detect when a student has nodded off during a lecture.

This kind of thing has certainly become part and parcel of what it means to be a Chinese citizen these days. Which is why it makes sense that the authorities would start these kinds of efforts early. Among other related initiatives in the country, we reported just last month about the early rollout of a kind of dystopian “social credit” scoring system in China that’s meant to rate citizens according to their behavior.

Get a bad score, and the government will block you from certain activities like booking flights and riding trains.

In the first five months of this year, the Chinese government had already used results of this scoring system to block more than 11 million people from booking flights and another 4.25 million from taking high-speed train trips. There are also punishments beyond those, which are believed to include little inconveniences like the government slowing down your internet speed, preventing booking at certain hotels and losing the right to own pets.