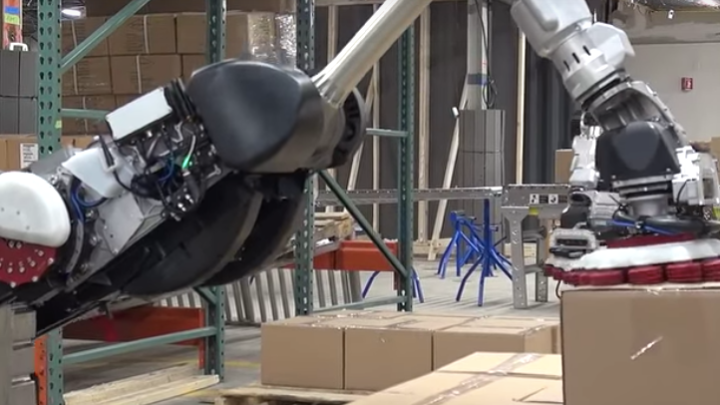 At this point, Boston Dynamics has gotten quite adept at scoring headlines for the videos released by the secretive lab showing off its fascinating robots. They’re machines that have been able to do everything from open doors to jump up steps and often lead to lighthearted speculation that the robot takeover of humanity is nigh.

Along these lines, the firm has just released a new video of yet another robotic creation — specifically, it’s an update of the company’s “Handle” robot it unveiled two years ago. The new robot looks kind of like a long-necked mechanical bird, and it’s designed to … stack boxes.

As you can see in the video at the top of this post, Boston Dynamics decided to go a little more mundane with its latest creation and showcase two robots moving cardboard boxes onto a conveyor. “Handle,” according to the company in text accompanying that YouTube video, “is a mobile manipulation robot designed for logistics.

“Handle autonomously performs mixed SKU pallet building and depalletizing after initialization and localizing against the pallets. The on-board vision system on Handle tracks the marked pallets for navigation and finds individual boxes for grasping and placing. When Handle places a boxes onto a pallet, it uses force control to nestle each box up against its neighbors.”

The boxes used in the video weigh about 11 pounds, but the robot is designed to handle boxes as heavy as 33 pounds. This version of Handle is also shown working with pallets that are 48 inches deep and 68 inches tall.

If you head over to Boston Dynamics’ webpage, you’re greeted with a message in the middle of the screen about the company’s intent to change “your idea of what robots can do.” The lab got started as a spinoff from the Massachusetts Institute of Technology, where it began developing robots that could run and maneuver like animals.

“Now,” according to the company, “we are taking the next step, combining the principles of dynamic control and balance with sophisticated mechanical designs, cutting-edge electronics, and software for perception, navigation, and intelligence.  Boston Dynamics has an extraordinary technical team of engineers and scientists who seamlessly combine advanced analytical thinking with bold engineering and boots-in-the-mud practicality.”

In other words, sometimes that means developing robots like the new mechanical factory worker. But there doesn’t always have to be a serious purpose, like this Boston Dynamics robot that’s got some sweet dance moves: