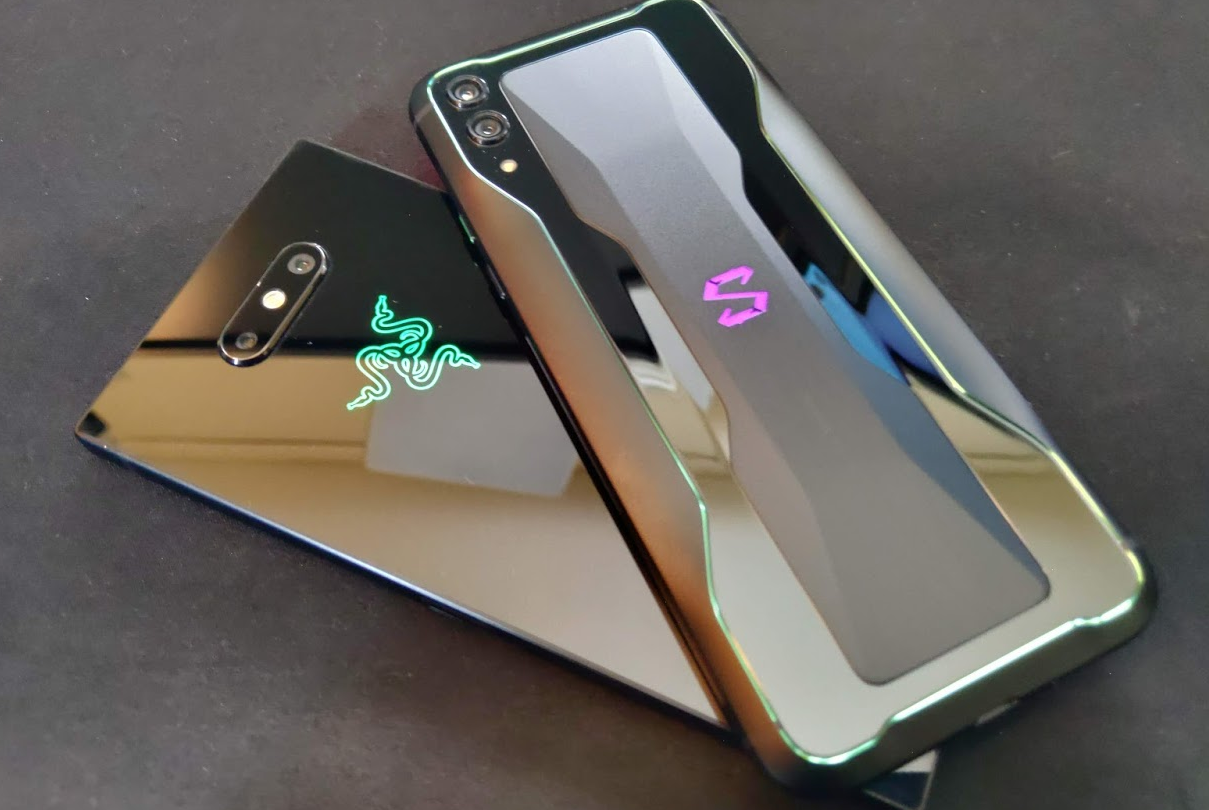 I don’t think it’s a stretch to say that just about all modern flagship smartphones are starting to look very, very similar. An edge-to-edge display up front, a few camera lenses on the back and — bam! — you’ve reached the pinnacle of smartphone design. That is, unless you’ve been keeping an eye on some of the smaller niches in the market, like gaming smartphones.

Mobile gaming is big business so it’s no surprise that at least a few companies are trying their hands at handsets built with gaming in mind, but the results are often hit-or-miss. I recently had the opportunity to spend some time with the two top smartphones built for gaming: the Razer Phone 2 and the Black Shark 2, and I have to admit that I am pleasantly surprised at how this particular smartphone niche is evolving.

Let’s get this out of the way right up front: These are two very, very different approaches. Learning from some of the missteps of the original Razer Phone, the Razer Phone 2 is a much more well-rounded device than its predecessor. It’s a flagship that also happens to be an amazing gaming device. The Black Shark 2 — from Xiaomi offshoot Black Shark — is built for gaming first and, while it’s a fine smartphone, almost every aspect of its design and feature set is focused on giving the user an edge in gaming.

If everything else about these phones was identical, this would obviously be the end of the discussion over which smartphone is better for gaming. More power almost always means a better gaming experience, and the Black Shark 2 would take the crown and we’d all go home.

But that’s definitely not the case, and the Razer Phone 2 has a pretty stunning trick up its sleeve when it comes to its display. Just like its predecessor, Razer’s second smartphone is equipped with an absolutely glorious 5.7-inch 1440p display running at a buttery-smooth 120 Hz. There’s just nothing like it in the smartphone world at the moment, and it’s incredibly hard to beat.

The Black Shark 2’s 6.4-inch 1080-by-2340 AMOLED screen is lovely. Since we’re talking about AMOLED vs LCD here, colors are going to pop a lot better on the Black Shark 2, and you just won’t get the same kind of contrast on an LCD. But that AMOLED screen still tops out at 60 Hz and it’s hard not to wish Black Shark had gone the same route as Razer.

If you’ve ever used one of Apple’s new iPads, which also features a 120 Hz refresh rate, you’ll know how dramatically different the experience can be. Everything is slick and smooth, and even something as simple as web browsing just feels more fluid when you’ve got twice as many updates flowing across the screen. It’s a joy to use, and for gaming, the experience can be head and shoulders above any other smartphone.

Now that doesn’t mean the Black Shark 2 doesn’t have some bragging rights of its own. The phone pairs the more powerful processor with a display that has a 240 Hz touch report rate, lowering the response time of input to truly imperceptible levels. According to Black Shark, it’s the world’s lowest latency touchscreen on a smartphone, with a response time of under 44 milliseconds.

For gamers, faster input means you might get a shot on your opponent a fraction of a second before they can pull the trigger. That’s a serious advantage to have when you’re playing online games, and if you’re a Fortnite or PUBG Mobile fan it could be a serious game changer. In practice, it’s difficult to actually notice a huge difference, but sometimes the difference between winning and losing is milliseconds, and the Black Shark 2 definitely takes the gold in that regard.

What we’re left with, then, is the Black Shark 2 with top-of-the-line internals paired with an ultra-sensitive display that runs at 60 Hz, and the Razer Phone 2 with ever-so-slightly less impressive specs tucked behind a display that makes every game look like pure eye candy. This is not an easy decision to make.

The phones aren’t just polar opposites in their approach to mobile gaming; they’re also dramatically different in their designs.

Like the original Razer Phone, the Razer Phone 2 sticks with a large, blocky form factor that allows its two booming front-facing speakers to be heard loud and clear when watching a movie or playing a game. Buttons on either side of the device are centered for easy access, and the in-button fingerprint display is fast and responsive. The all-glass back facilitates wireless charging, which was something the original Razer phone regrettably lacked.

The Black Shark 2 is, well, I don’t even know how to describe the design. It’s incredibly unique, with a slightly raised bump extending along its back, flanked by a single piece of glass that loops around the entire back of the device. It looks… weird, but Black Shark says its design is meant to be more comfortably gripped while gaming. In that regard, I have to agree. It’s undeniably easy to grip and doesn’t feel like it’s going to slip from my grasp even during a long gaming session. Unlike the Razer Phone 2, the Black Shark 2 opts for an in-display fingerprint sensor. It worked quite well in my testing and unlocked rapidly with very few errors.

Both phones have dual rear-facing cameras, and both hold their own when it comes to snapping photos. I’d say the Black Shark 2 takes the edge in camera features and quality if not for the fact that you can already get a version of Google Camera for the Razer Phone 2, which boosts the photo and video quality significantly over the stock camera app. If you want a top-of-the-line smartphone camera you’re probably not looking at a gaming smartphone anyway, but both of these phones seem comparable to other 2018 flagships in picture quality so I have no complaints.

Neither of these phones has built-in headphone jacks. Boo.

As you’ve probably noticed from the various product images for both of these devices, they’re big on eye-catching lights. The Razer Phone 2 supports Razer’s Chroma lighting app, allowing you to customize the color of the logo, its pattern of pulses and hue changes, and how often it lights up.

The Black Shark 2 has similar controls for its rear “S” logo, and the added bonus of super bright LED strips along the sides of the device that can show information like the battery charge level when it’s plugged in, which is actually pretty convenient.

Razer Cortex lets you select specific settings for any game on your device. You can tweak several different options, including how hard you want the CPU to work, the refresh rate of the display, and even the resolution of the screen. You can choose to suppress notifications when you’re in a game, too.

Black Shark’s Shark Space is toggled on via a switch on the side of the device. Yes, this phone has a dedicated “gaming switch,” and when you flip it you’ll be cut off from most of the rest of the smartphone’s features and notifications. An in-game menu lets you modify performance settings and enable “Ludicrous Mode” which dedicates every bit of the phone’s power to the game experience.

What I found odd about this — aside from the fact that some of the menu prompts are still in Chinese — is that cranking up the performance has little impact on the frame rate of each game. Many smartphone games cap their FPS anyway, so if you’re playing something like Pokemon Go or Asphalt 9 on the Black Shark 2 it’s going to run at 30 fps regardless of what performance settings you tweak. However, the same isn’t true for the Razer Phone 2, which seems to override these limitations and crank up the frame rate on most games without any issue.

I’m not sure why this is, and I’d be interested in exploring the technical side of this in the future, but for now, the reality is that many games don’t benefit a whole lot by going all-out with performance tweaks. An intense battle in PUBG might push the hardware to its limits, giving you an edge if you’re running a game on a maxed-out Black Shark 2, but in most cases you’d be hard pressed to notice a difference. That said, games just tend to look better on the Razer Phone 2 because of its much higher refresh rate.

Both devices also have optional accessories that include full-sized controllers. The Black Shark 2 allows for a pair of attachable add-ons that snap on to its sides, turning it into something of a Switch-alike, while Razer is selling a more traditional controller that plugs into the phone and includes a dock to hold the phone in place.

Like I said, these phones take such radically different approaches to mobile gaming that it’s somewhat difficult to judge them against each other. That said, the Razer Phone 2 is clearly the better all-around smartphone, and its screen makes every smartphone task a joy. The Black Shark 2 is more powerful and, if input latency is a concern for you, it may give you a tangible edge in online games.

The Black Shark 2 currently retails for between $550 and $600 depending on where you can find it, while the Razer Phone 2 (and its sexy new Limited Edition Satin Black finish option) will set you back $499.

I think what struck me most about my time with both of these phones is that the “gaming phone” niche actually has serious potential to deliver unique designs and new approaches that seem absent in today’s popular flagships. I hope it continues.