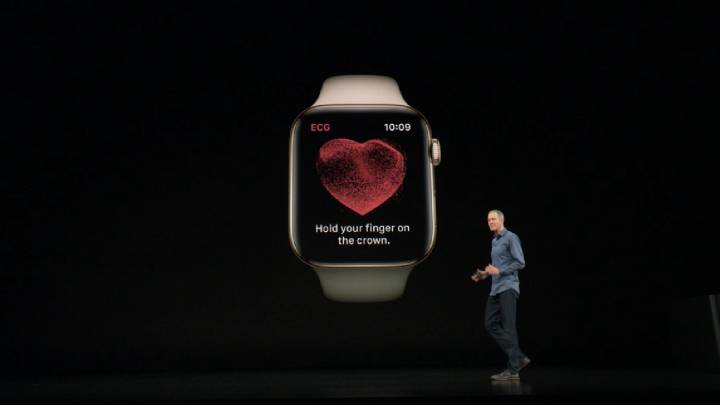 In the days leading up to Apple’s splashy fall product event last week, members of the company’s watch team were probably sweating bullets. Because the signature new feature of the watch, the ability to take an electrocardiogram reading, apparently didn’t get the all-important green light from the Food and Drug Administration until … less than 24 hours before show time.

That’s according to Fast Company writer Mark Sullivan, who apparently overheard an Apple employee talking about how close they cut it outside the Steve Jobs Theatre after the event. “I understood the man’s anxiety better when I saw that the FDA’s classification letters to Apple were dated September 11,” Mark wrote in a piece online today. “Apple’s event was September 12.”

During the event itself, as we all saw, Apple COO Jeff Williams told the assembled crowd the ECG feature embedded in the watch had won a de novo clearance from the FDA. It’s a type of designation the company won for being unlike other products on the market — and, as Mark notes, Jeff wouldn’t have been able to say that, which seemed to put some official government heft behind the new feature, if the letter hadn’t come the day before.

FDA commissioner Dr. Scott Gottlieb and Center for Devices and Radiological Health Director Dr. Jeff Shuren, released a joint statement last week saying the FDA had “worked closely” with Apple as it developed and tested its new watch tech. You can read a copy of the FDA’s Sept. 11 letter to Apple here, which walks through exactly how the company is allowed to market the new watch.

As a reminder, when the Watch 4 goes on sale on Friday it won’t be able to take an ECG reading right away. That feature will be added via a software update later this year. Getting FDA approval, meanwhile, removed an important hurdle in between Apple and getting this out to the public the way it wanted.

According to the FDA letter, the agency didn’t actually look at the hardware itself — just a notification feature and an app, as Mark notes in his FastCo piece.

“The first app, called the ‘Irregular Rhythm Notification Feature,’ looks at the Apple Watch wearer’s heartbeat rhythm and can send a notification if it detects patterns reminiscent of atrial fibrillation or some other arrhythmia. The second app, which the FDA calls electrocardiograph software for over-the-counter use, creates an electrocardiograph and provides analysis on whether it shows signs of cardiac arrhythmias.”