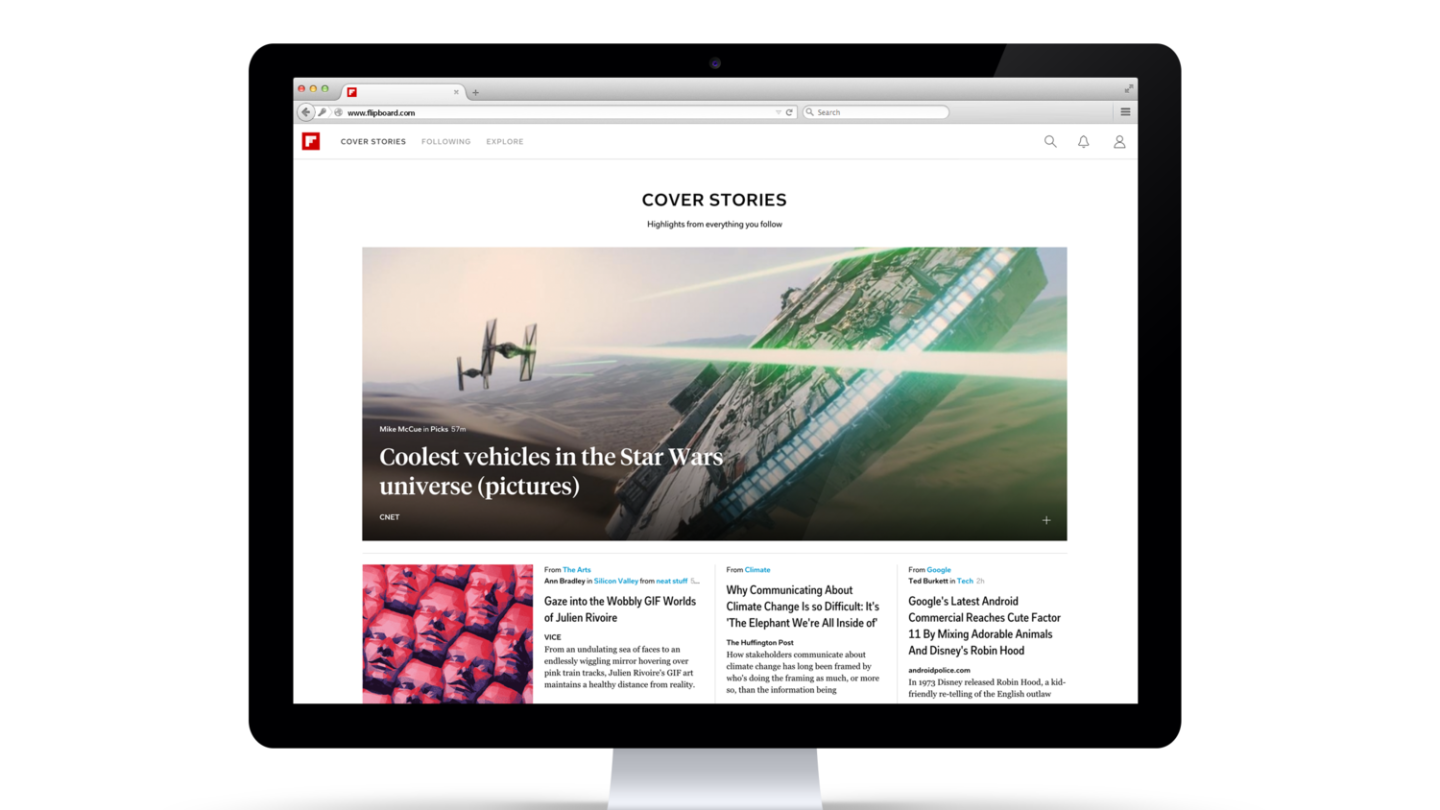 Scrolling through the Apple News app on my iPhone XR the other day — one of the many different drivers of traffic for this site outside of the usual suspects like Google and social networks — it struck me how much I’d come to rely on apps other than Twitter in the age of the coronavirus to keep up with news, as well as pop culture and other things I care about. Where Twitter has increasingly descended into a dumpster fire of idiocy, racism, misogyny, and, overall, an efficient clearinghouse for peoples’ opinions and witticisms that aren’t that useful to me at the end of the day, news aggregator apps (like Apple News, as well as Flipboard) fulfill a need for a news junkie like me, in that I don’t have to wade through people’s comments and posts to find the news I care about. Scroll through Apple News, or page through Flipboard, and the news is just … there, ready and waiting.

In this post, I’m going to compare and contrast Apple News and Flipboard, partly because both apps have made big strides recently compared to where they were even just a year or so ago. As I alluded to earlier, this is a historic moment we’re living in right now, characterized by news events that are upending life around the globe (the COVID-19 pandemic and the Black Lives Matter movement and protests serving as two recent examples). Point being, both of these apps do a great job of helping people making sense of everything going on right now, in addition to keeping up with your own personal passions and interests. Let’s dive in and take a closer look at each.

I’m going to start with Apple News. For both app-specific sections below, I should add, I’m going to encompass recent developments and updates associated with the app, as well as some of my own thoughts after spending a significant amount of time using each (the thoughts laid out in no particular order). Note: Apple News, of course, is only available to people who use Macs, iPhones, and iPads, while Flipboard is available to both iOS and Android users (in addition to offering a Web version).

Fast Facts: Apple News comes preinstalled on all new iPhones and iPads, and it’s also available as a desktop app for Macs. It’s a free app, but there’s also a subscription tier branded as Apple News+ that costs $9.99/month.

Is it worth the price? I’m definitely a news junkie, and my answer to that question is that it definitely could be for many people. For example, that price gets you access to hundreds of magazines and a few newspapers, including The Wall Street Journal. And the Apple News+ monthly cost is a fraction of the regular monthly subscription price for the WSJ alone, not to mention Apple also throws in other solid news products like The Los Angeles Times into this offering. In terms of updates coming to the app, meanwhile, Apple is apparently moving toward adding audio versions of stories within the app so that you can listen to them instead of just reading them — but you can kind of already do this now, if you want. Just save an Apple News story into the fantastic Pocket app, click the headphones icon at the bottom, and then press play. Voila. Another thing to know: Apple is also reportedly considering a mega-bundle subscription package, which could include multiple Apple subscription-based services like Apple Music, , and Apple News+. Depending on where Apple prices that, if we do eventually get such a thing, that could be a great deal.

What I like, and what I don’t: Apple News is arrayed in the style of a vertical scrolling feed, which I love and which makes it easy to get through content quickly. To save stories for reading later, I tend to use the Apple News app’s “Saved Stories” feature, because it’s much quicker to tap that and leave a story saved within the app, rather than tapping multiple times to save a story into something like Pocket, but that’s not a big deal.

I also like how well Apple News “guesses” stories that I’ll like. I click the thumbs-up button often on stories that I want to see more of, and over time there have been only very rare instances when Apple News has put a dud of a story into my feed that I just don’t care about. One thing I don’t like: Stories are presented on the basis of both recency as well as topic. In other words, as you scroll you won’t merely see the latest stories from everything you’re following. Apple News combines things as you scroll down into categories — meaning, here are all the latest tech stories from your sources, and here’s a selection of recent stories from one of your followed outlets like Bloomberg, and here are a few other recent stories from all your sources that we think you’ll like. I’m not a fan of that. I’d rather just see recent stories across all of the sources I’m following.

One more thing I’ll say before diving into Flipboard. There’s a setting within Apple News that you can turn on or off depending on whether you’d like to see only stories from sources you’re following, or if you want Apple News to use the sources you’re following to guess what else from the news spectrum you might want to see. For example, I follow Rolling Stone magazine in Apple News, and the app, seeing that, often shows me interesting music stories from sources I don’t follow.

Fast Facts: Flipboard has been around for about 10 years now, debuting back in the day as one of the most gorgeous, smooth, and useful apps on the iPad. Steve Jobs himself even visited the Flipboard team’s office back in the day, where CEO Mike McCue showed off the app, to Steve’s delight. As I recall the story I heard about this encounter, Steve watched how you could “flip” through stories from sources you’re following, and it inspired the Apple CEO to launch into a story about … I believe it was a particular fish market in Japan. He was making a point about how storytellers are so important to help places like that survive and endure.

Anyway, the biggest difference between Flipboard and Apple News is the user interface. The standard way you use Flipboard is by “flipping” a tile-like story up, so that you cycle through stories like that one at a time. In my opinion, that is both a strength and weakness of the app. Because, on the iPhone at least (I’ll come to the Flipboard iPad app in a moment, which is a little different), the app puts one story at a time in front of you, which forces you to pay attention to it more. Publishers no doubt love that, and so do advertisers, but it doesn’t make for the kind of fast scrolling you can do in an app like Apple News to catch up on news quickly. Along these lines, though, Flipboard has been testing a major change to its design — arguably the biggest change in its existence thus far. Check out my interview from earlier this year with McCue, but, bottom line, you can now play with a setting that gives you a vertical scrolling feed on the iPhone for Flipboard. The iPad app is a little different — there, as you page through your Flipboard app you can see multiple stories at a time on the screen, unlike on the iPhone. Having said all that, it’s supremely easy for me to get lost in my Flipboard (not flailing, I mean, just caught up in all the great content), though I don’t always have time for that.

What I like, and what I don’t: There is so much to like about Flipboard, if these kinds of news apps are up your alley. Off the top of my head, if you run into any problems there’s a help feature that allows you to chat with someone to work through your problem right there within the app. No waiting for a day or two to get an email answered. Also, if you like the app or even want to complain about something, if you do it on Twitter and mention McCue you’ll probably get a quick reply. In my opinion, he’s one of the most accessible (and genuinely nicest) tech CEOs. Check his Twitter mentions if you don’t believe me (@mmccue).

Flipboard is the much better option if you also care about local news. If you live in any of 50 major US cities, you can follow one of them and Flipboard will combine local newspapers, radio, and TV stations, as well as blogs, for a 24/7 feed highlighting everything from news to real estate, dining, sports, traffic, and more. “For example,” Flipboard explains in a blog post from a few days ago, “people who follow Kansas City will see (at the time of this writing) pieces about local protests, the current coronavirus count, and thunderstorms from the area.”

One thing I don’t like — this might be my own fault, because I haven’t “tuned” my Flipboard as much as I have my Apple News app — but despite the sources I’m following on Flipboard, I feel that the app makes some bizarre “guesses” about stories I’ll want to read a little more often than Apple News does. I opened my Flipboard “Cover Stories” pane just this morning and saw at least one parenting-related story (Flipboard should have no such signal that I’m interested in that) as well as one or two about India (I live in the US). However, Flipboard does a better job of Apple News, I think, of not letting things I care about slip through the cracks. What I mean is this: I’m following the same sources on both Flipboard and Apple News, and often I will see a story that I care about on Flipboard (and I’m glad I saw it there) just not show up at all in my Apple News feed.

I’m hard-pressed to pick a winner between both of these apps. Because they’re so similar, I think I may give a slight edge to Flipboard here because of the beautiful design. It makes stories — and, heck, even the ads — a joy to see. Apple News is much more utilitarian, in my opinion, not that there’s anything wrong with that. These are both fantastic apps for keeping you informed and up-to-date on the news.