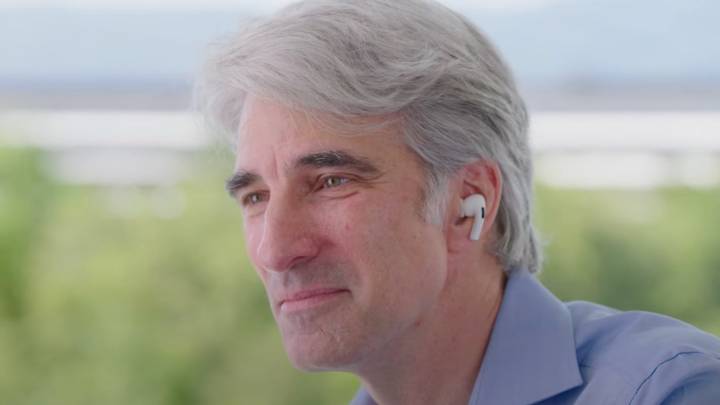 Apple just released a brand new product, AirTag, which first began to appear in rumors more than a year ago. Of course, that’s just one of the new product categories that Apple has been developing “in secret”. We have recently seen an increasing number of reports detailing Apple’s smart glasses and the Apple Car. Some of the smart glasses products might launch as soon as next year, reports say, while the Apple Car won’t be unveiled until at least 2024.

But Apple doesn’t talk about products still in the research and development phase and doesn’t comment on rumors. That’s why you just have to see Craig Federighi brilliantly dodge questions about mixed reality (MR) software during an interview that has nothing to do with Apple’s rumored MR headset.

Whatever products Apple might be working behind closed doors, Federighi is at the center of it all. He’s a high-ranking executive overseeing software development at Apple. As the senior vice president of software engineering for iPhone, iPad, and Mac, he’d be in the unique position of having to ensure that Apple’s best-sold product, the iPhone, works with the entire ecosystem.

The mixed reality device will display augmented reality (AR) and virtual reality (VR) content. Various rumors from reputable sources claim that Apple might unveil the product this year, although the headset wouldn’t launch until 2022. The gadget would look like other VR headsets on the market, but would weigh under 200g, rumors say. The MR glasses would feature more than a dozen cameras, eye-tracking support, and 8K displays. The glasses would not operate independently, requiring a connection to an iPhone or a different Apple product.

Federighi was Joanna Stern’s guest in a Wall Street Journal interview about the newest iPhone privacy feature rolled out in iOS 14.5. App Tracking Transparency (ATT) is Facebook’s new nightmare, a functionality that will force developers to ask iPhone and iPad users for permission to collect data and track them online. The interview focuses on how ATT works and on Apple’s thinking behind the service. If there’s just one video you have time to watch on how iOS 14.5’s ATT works, Stern’s interview with Federighi might be it.

It’s at the end of this discussion about user privacy in Apple products that Stern drops a few questions that are unrelated to the new iOS 14.5 privacy feature. She reminded Federighi that Apple CEO Tim Cook said a few weeks ago that he probably won’t be at Apple in ten years and that Federighi’s name is being floated as a potential replacement.

“Insanity,” Apple’s software guru replied with a smile on his face and without thinking twice. “That would be irresponsible,” he joked before Stern moved on to the next question.

“How’s the software going in the mixed reality headset?” she followed. “I don’t know anything about what you’re talking about,” Federighi said without flinching, keeping that big smile in place.

“What do you think of mixed reality?” Stern pushed. This is where Federighi actually provided an answer, which is in line with what you’d expect from this sort of interview with high-ranking Apple execs. “I think it’s got a lot of potential,” he said. “I think it deserves exploration.”

Whatever that next big Apple product might be, Stern concludes, it’s likely that Federighi will push for strong privacy features into it.

Reports said recently that it’s a different exec overseeing Apple’s smart glasses, and he’s reporting directly to Tim Cook. That’s Dan Riccio, although Apple would never confirm it. Regardless of what Riccio is working on, it’s very likely that Federighi will be involved in the smart glasses projects, as long as they have to run in connection with a smarter device, like iPhone, iPad, or Mac. It’s also likely he’ll keep on his poker face in interviews for as long as it takes for Apple to finish MR glasses development.

The Journal’s full interview with Federighi is available below: