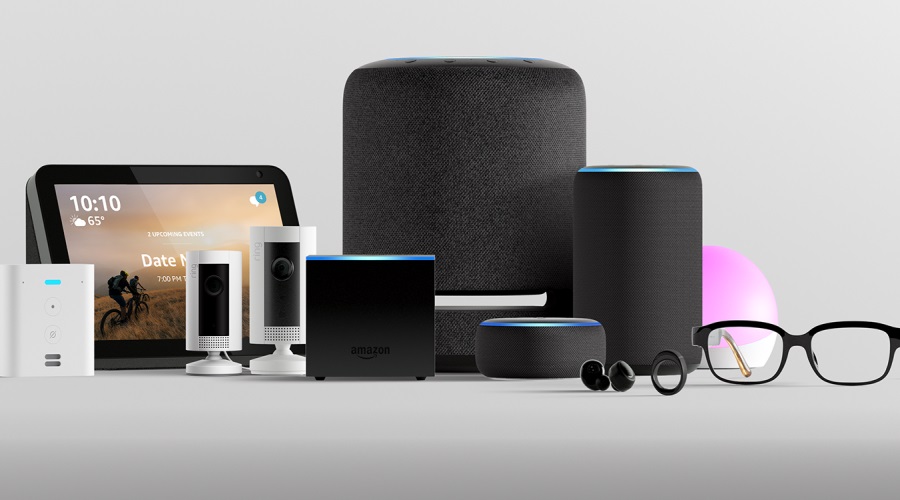 Amazon returned to the stage on Wednesday for the latest edition of its annual event, during which it showcases new devices from its many product lines as well new software features and updates to Alexa. Similar to last year, the event was absolutely packed to the gills with announcements, some of which will be more relevant to the average consumer than others. Below, you’ll find a roundup of each and every device that was unveiled.

This is the same Echo Dot you know and love, but with an LED display underneath the cloth wrap that will show you the time whenever you glance at it. It can also display the temperature, alarm times, and more, depending on your preference. You can also tap it to snooze an alarm. Preorders begin today for $59.99.

The latest generation of the standard Echo features the same audio architecture as the Echo Plus, including a 3-inch woofer and higher back volume. Plus, it comes with the fabric design that has pervaded the line in recent years, in Charcoal, Sandstone, Heather Gray, and Twilight Blue colors. The new Echo costs $99.

Perhaps the most substantial announcement of the entire devices event, the Echo Studio is Amazon’s answer to the HomePod. At $199.99, it is the most expensive Echo device to date, with support for 3D audio from Dolby Atmos and the ability to automatically calibrate sound to whatever room it’s in. It features left, right and top mid-range speakers, a directional tweeter, and a built-in 5.25-inch bass driver coupled with a bass port.

This multi-color smart lamp is an accessory for kids that pairs with Alexa for a variety of functions. It can replicate a flickering campfire for playtime, has a Sleep Timer that causes the glowing light to slowly dim as bedtime approaches, and can even be used as the centerpiece for a dance party, all for $29.99.

The all-new Eero takes less than 10 minutes to set up and covers your entire home with mesh Wi-Fi by combining dual band radio and TrueMesh technology. You can get one for $99.99 or a 3-pack for $249.99.

If you’ve been looking for a cheap, simple way to get Alexa into every room of your home, Echo Flex is the gadget for you. The Echo Flex –which has a speaker, two buttons, an LED status light, and a USB port at the bottom to charge your devices — plugs directly into a wall outlet. It costs $24.99, but there are also accessories that you can plug into it, such as a night light or a motion sensor, which will cost $14.99 a piece.

If you want a Ring camera but aren’t sure where to put it, the Ring Stick Up Cam is the most versatile of Ring’s products. It can run off of battery, be plugged into the wall, or draw power from a solar accessory. Plus, it has 1080p video, motion detection, and night vision, and costs 30% less than the old version at $99.99.

On the other hand, if you just need a camera for inside your home, Ring has a product for you too. This is the cheapest camera that Ring sells at $59.99, but it’s compact, and you can mount it anywhere.

Because the Amazon Smart Microwave was such a huge hit, Amazon decided to double down and release a Smart Oven as well. This item is a combination microwave, convection oven, air fryer, and food warmer. And yes, you can control it with your voice. Amazon’s Smart Oven costs $249.99 and comes with an Echo Dot.

Coming next year, the Ring Fetch is a pet tracker that will ping pet owners if their animal leaves a certain perimeter. No price or release date yet for this device as it’s only a “reference design.”

Amazon’s new Echo Buds are wireless headphones that incorporate Bose Active Noise Reduction technology that users can turn on or off by simply double-tapping the earbud. You can also press and hold to access your phone’s voice service, including Siri and Google Assistant. Echo Buds have 5 hours of battery life (20 with the case), support for Alexa (obviously), and will start shipping in October for $129.99.

These are new products that will be released to a limited number of consumers to get feedback. If that feedback is positive, and Amazon sees a future for the product, it will ramp up production for a wider release:

As you can see, Amazon had quite a busy day on Wednesday. Many of these devices will be available within the next month or so, but we also got a glimpse into the future with the Day 1 Edition devices.