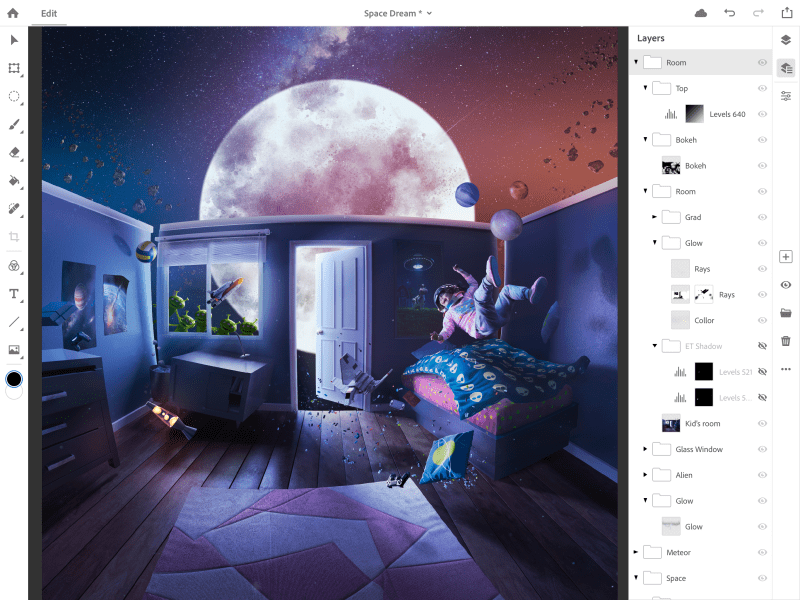 Adobe didn’t waste any time giving attendees of its Adobe MAX conference something to cheer about on Monday, as the software company announced that Photoshop CC is finally coming to iPad. This isn’t a scaled-down version of the app, but rather the full Photoshop experience ported directly to a new device.

“Photoshop CC on the iPad is the newest piece of the system, bringing real Photoshop to mobile devices with an approachable user experience and the power and precision needed for image compositing,” says Adobe. “People can use the mobile version of Photoshop on its own or as a partner to Photoshop on the desktop.”

As Adobe’s Pam Clark explains on the company’s blog, the process of bringing the complete Photoshop experience to Apple’s tablet began when two engineers asked if they try to get the program up and running on an iPad using the real Photoshop code. Adobe didn’t want to tell anyone in case the experiment was unsuccessful, but a few months later, a “proof of life” concept of the full Photoshop app was launching on an iPad.

You can treat the mobile version of Photoshop CC as a standalone application, or as a companion app to the desktop version, as any projects you work on within the iPad app will automatically sync to the desktop. You’ll never have to export, import, or convert any of your projects when you move from one device to another.

With the same code base in place, Photoshop CC on the iPad will be nearly indistinguishable from the desktop app, save for some adjustments to the user interface and the addition of touch gestures. All of the tools and features you’re familiar with will be in place, including the layer system, masking, and filters.

Photoshop CC on the iPad will launch in 2019, but no specific release date was shared. That said, Adobe wants to get the app out as quickly as possible, and will then update the app to add necessary features.