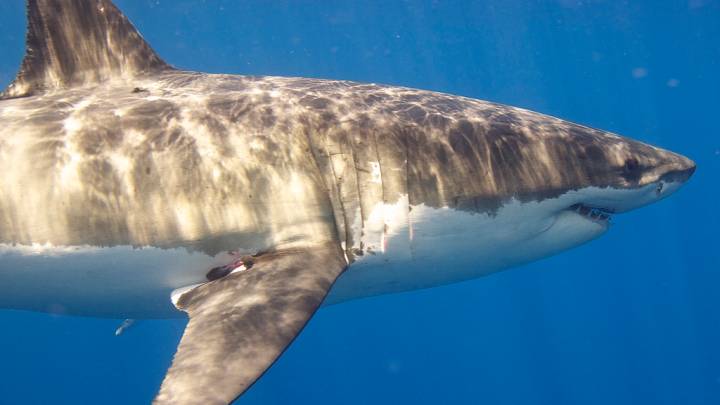 Being some of the most dangerous creatures in Earth’s oceans, sharks have been the subject of extensive study for many, many years. Scientists know a lot about their diet, behavior, and even what causes the sharks to sometimes mistakenly attack humans. Despite all this, one big question remains: Why do so many sharks travel to the exact same spot in the middle of nowhere, year after year?

The location, nicknamed the White Shark Cafe, is located roughly halfway between Baja California and Hawaii, and every winter it becomes a hot spot for several species of shark, including great whites, blues, and makos. But figuring out exactly what they’re doing there has taken years of research, and it’s not done yet.

What’s most peculiar about the White Shark Cafe is that it’s in a relatively featureless spot in the Pacific. Scientists knew tagged sharks were traveling there every year but since the area was believed to be barren it seemed totally unexplainable. Still, every year would bring more and more evidence that something was going on there, so a team of scientists from several institutions including the Monterey Bay Aquarium and Stanford University set out to solve the mystery once and for all.

The team spent weeks at sea, traveling along the path to the Cafe that normally takes sharks up to 100 days to complete. That’s an incredibly long journey, so there must be something happening there that’s worth the trouble.

What the team discovered was that, rather than an empty stretch of ocean, the Cafe actually plays host to excitable fish that produce a bioluminescent glow that lights up the dark waters right on the edge of where sunlight can no longer penetrate. Every day, the sharks would dive hundreds of feet down to where these flashy fish congregate and, it’s believed, feast on any smaller predators that are hunting the glowing creatures.

That may be one piece of the puzzle, but while observing the sharks the researches noticed another bizarre ritual taking place. The male sharks would form v-shaped patterns as they dove, continuing to zig-zag repeatedly as often as 140 times in a single day. The scientists are still clueless as to why they did this, or why only the male sharks were behaving this way, but they believe it’s either a hunting technique or perhaps something to do with mating.

Further analysis of the data is planned, and the scientists have a lot of work ahead of them before they can truly explain the White Shark Cafe phenomenon with certainty, but the picture is beginning to take shape.