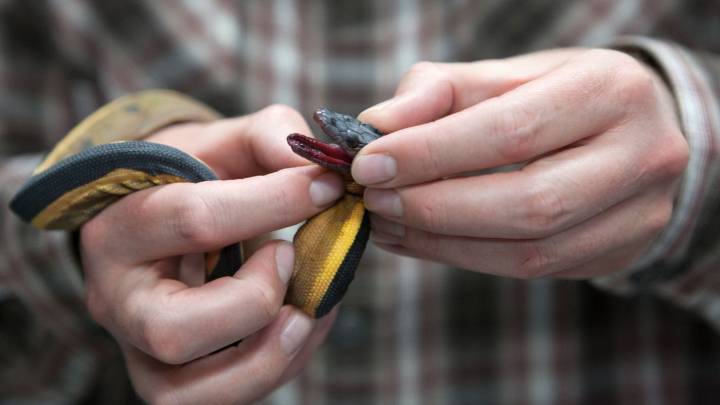 Taking a trip to a beach in Southern California is supposed to be a relaxing, leisurely experience. For some beachgoers earlier this week it was anything but, as a venomous sea snake was discovered on the sand, soaking up the sun like a tourist who had outstayed his welcome. The visit from the creature, a yellow-bellied sea snake, is troublesome for a number of reasons, including the chance that it could have bitten and seriously harmed someone. But what’s most alarming is the fact that the snake isn’t really supposed to be here at all.

Our planet is getting warmer. Evidence of that fact is everywhere, from bleached coral reefs to damaged food supplies, and now it might also be pushing venomous sea creatures like the yellow-bellied sea snake farther north than they belong.

“Oceans are warming and the species that respond to that change will be those that are the most mobile,” Greg Pauly of the Natural History Museum of Los Angeles County told the LA Times. “So the big question now is this: Are sea snakes swimming off the coast of Southern California the new normal?”

The serpents are found all over the world, including the waters off of Africa, Australia, and Central America, but like any animal they have a specific climate they prefer. El Nino years, in which the surface temperature of the oceans of the Pacific is warmer than usual, has brought the yellow-bellied sea snake to Southern California shores before. The sighting reported this week has nothing to do with an El Nino, but the ocean’s gradually rising temperatures are pushing the animals north just the same.

Scientists have been voicing increasingly dire opinions with regards to climate change and the notorious “tipping point” from which we’ll be unable to recover. We’re already seeing many signs that the Earth is changing more rapidly than it ever has in recorded history, and while a venomous sea snake washing up in California might be something you can brush off today, it’s just a symptom of a much larger and more serious problem.