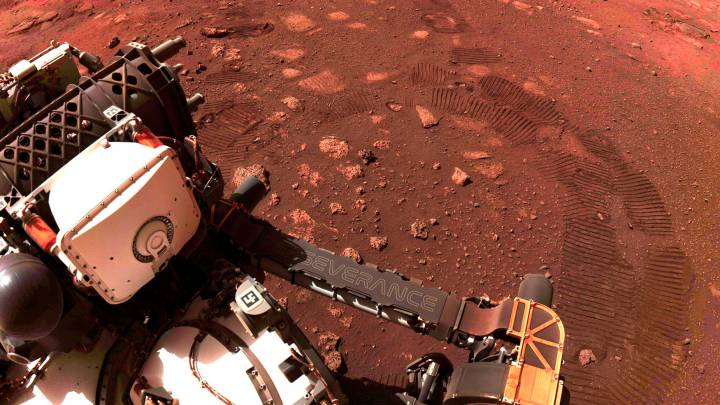 Mars is the next planet that humans will explore. NASA and SpaceX are both working towards putting a man on the red planet. One day, we’ll colonize the planet and then use it as a forward operations base for conducting more substantial campaigns in space. The ultimate goal is to find new planets that can support life, as we’re rapidly destroying this one. It’ll be several years until humans reach Mars, so Perseverance and Ingenuity will have to make do for the time being.

While we wait for NASA’s rover to make new discoveries on Mars, we’ll see all sorts of unusual stories along the way, like the following conspiracy theory that went viral on TikTok, which claimed that humans lived on Mars but ultimately engaged in a massive nuclear war that destroyed all life on the planet, turning it red in the process.

As with most conspiracy theories, this one is false, but it’s entertaining nevertheless. Posted by user crackheadjoedirt, the theory has been shared more than 230,000 times already. It comes in response to a different user’s question: “What’s a conspiracy theory that absolutely blows your mind?”

Crackheadjoedirt explains in his theory that Mars isn’t naturally red. He thinks that humans waging nuclear warfare on the planet were responsible for its current condition.

“If enough nukes were to go off on a planet, the first thing that would happen is a nuclear winter. A nuclear winter is an aftermath of nuclear blasts causing ash that is so thick that it blocks out the sunlight,” he says. “After all the natural resources are drained up from the nuclear winter, the planet turns red from dust. My theory is that we’ve come from Mars after we drained all of its natural resources and destroyed it with nuclear bombs.”

He also says that Mars has water because it always had water, and that’s just another piece of evidence that the planet could have supported life. Thankfully, Newsweek points out that the theory doesn’t add up. Scientists believe that Mars had flowing water on the surface billions of years ago. A study published in Science on March 16th says that the current volume of water on Mars was reached some three billion years ago. According to the Smithsonian National Museum of Natural History, humans capable of walking on two legs emerged around four million years ago.

A nuclear winter would need hundreds of thousands of years to clear up, the TikToker says, although it’s unclear where the figure comes from.

The color of Mars can be explained by science as well. The planet is covered in rust or iron oxide, not nuclear waste. The rust particles are everywhere, on the ground and in the atmosphere. NASA scientists have not fully explained the provenance of iron oxide, but they think the fact that Mars is smaller than Earth has something to do with it. It all boils down to gravity. Earth’s iron sank to the core, but Mars’s iron remained spread out on the surface.

An older report from Nature in 2004 proposed temperature as another factor responsible for Mars’s red hue. The hotter Earth melted iron oxide, and the iron sank into the core. But temperatures on Mars were never as high.

Science aside, it would be incredibly ironic if this theory somehow turned out to be accurate. We’d be in a position where we’d want to return to a planet we once nuked into oblivion just to use it as a staging point for the inevitable search for a new Earth that can support life. But, once again, it’s a bunch of nonsense.